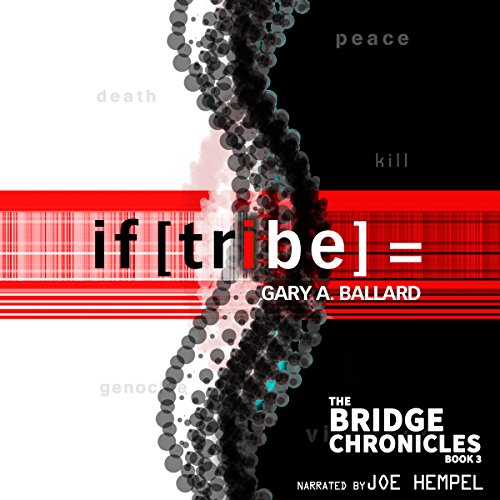 Leader of the Los Angeles street gang Los Magos is assassinated by the rival El Diablos. As members of the Five Families, war between the two gangs could ignite the whole city, prompting a response from the Chronosoft Law Enforcement Division (CLED) that could destroy all the families. Artemis Bridge, the amoral fixer with the quick wit vows to stay out of the war despite his friendship with ex-footballer turned gangland revolutionary Stonewall, new leader of Los Magos. Bridge is reluctantly pulled into the middle of the worst civil unrest since the 2027 riots, where he discovers the war is more than a little tribal bloodletting between rivals. This fast-paced, action-packed cyberpunk thriller is the third in the critically acclaimed Bridge Chronicles series, sequel to Under the Amoral Bridge and The Know Circuit.

When I first received a complimentary copy of If(tribe)= to review, via Audiobook Boom, it was suggested to me that, if I had not already done so, it would be wise to read the earlier books in the series to fully gain the flavour the world in which this is set and the characters involved. So I purchased book one, Under the Amoral Bridge, listened and thoroughly enjoyed it (see my reviews for this and book two, The Know Circuit). So glad I did. I came to this story set in 2029 (where corporations have the political power, including policing, and also hold the financial purse strings in an otherwise bankrupt country) with an awareness of Bridge, the main protagonist, his loyalties and loves, and his ongoing relationship with the gang leader friend Stonewall and his philosopher bodyguard, Aristotle. All were, therefore, already living, three dimensional beings by the time i started on tbis book.
And what a fun book it is. Bridge retains his characteristic sarcastic wit despite the many life threatening situations in which he and his friends find themselves. But this time he is driven by more than self protection and expectation of financial gain. This time the fate of the five families and his whole way of life is at risk. But if he can also make some money from it - well, he is Bridge, the bridge, the fixer ...

The story is a glorious romp of explosions, fighting, verbal repartee, double dealings and even some techno magic. And Bridge's trademark iingenious solutions. He's not a conventionally nice man by any means but lovable? Oh, yes. Joe Hempel captures all of this to perfection. Evenly paced narration with distinctive individual voices in dialogue, he simply is Bridge, the man who "knows a guy" for any situation.
This book can be read/heard as a stand alone. There is sufficient background material worked into the story to make it comprehensible and enjoyable. But for the full immersion iinto the who, why and all round pleasure, start at the beginning with book one. A real treat for every fan of superfast action and ideas, with terrific characters acting on unexpected ideas in a good versus bad scenario (though sometimes it can be hard to tell which is which!). Brilliant.
Highly recommended.

Iam enjoying this series The Bridge Chronicles. The main protagonist is gutsy, clever and decisive. I’ll take my heroes flawed thanks and Artemis Bridge is about as suspect a role model as anyone could ask for. He’s not just the guy who knows a guy, he’s the guy who’s working every angle, turning even the most horrible events into a morally ambivalent victory.

Entertaining, interesting and enjoyable story. Corporate control gone wild. A world where cities are now governed by corporations. Which if you really stop and think about things in today's world is plausible, in the aspect that some companies are to powerful. Gangs(tribes) that are evolving, influenced either politically, by the corporations and still others have their own ideas.

Artemis Bridge the fixer, is the man who can get whatever you need or want illegal, immoral or otherwise questionable. Every situation has an angle to be worked. Good or bad. Even in a fight between the families and the mayor he finds a solution to the gang wars.

Good story with a great cast of characters. Plenty of twists and turns, double dealing, action, suspense and unusual technology.

Joe Hemple does a really good job with the narration. This is the first time I have listened to anything he has narrated. Nice voice easy to listen to for long periods of time. Clearly spoken. Smooth even pace. Good character voices, even female characters. Perfect voice for narrating audiobooks.

This audiobook was provided by the author, narrator or publisher at no cost in exchange for an unbiased review courtesy of AudiobookBoom dot com

Excellent 3rd book in the Trilogy!! Love It!!!

Would you listen to if [tribe] = again? Why?

Yes I would I really like the story and characters. They are fun and really enjoyable to spend time with and it is a cool world to immerse yourself into.

What was one of the most memorable moments of if [tribe] =?

It is really hard to pick just one memorable moment in this book. I would have to pick when Bridge wakes up in the apartment with the assassin and gets the guy to spill the plan in typical bad guy fashion and Bridge manages to do something spectacular. I really do not want to spoil anymore of the scene because it is a pivotal one in the story.

What does Joe Hempel bring to the story that you wouldn’t experience if you just read the book?

Joe is one of my top two favorite narrators. The story comes alive for me with his voice.

No I try to listen to the books in a few days time to keep the story stretched out so it does not ended because it do not want to have to wait for the next one to come out.

“This audio book was given by the author, narrator, or publisher at no cost in exchange for an unbiased review via Audiobook Boom.”

Entertaining and Intelligent With Great Characters

What made the experience of listening to if [tribe] = the most enjoyable?

I really enjoy a story with a good and believable dystopian future. This book does that well.

The good guy (sort of) wins in the end.

My favorite scene involved special squad's intervention of a gang war and the interludes pertaining to that event.

Most definitely yes! I'm sad it's over.

I really enjoyed the Bridge Chronicles and am terribly sad this is the final book. The story revolves around Artemis Bridge in a dystopian near future that is really not that far fetched given our current political atmosphere. Artemis Bridge is the guy who knows a guy, the amoral bridge. He has a way of manipulating everything around him to come out on top. At first you think he is all about himself and the story keeps trying to justify that. But in the end you believe he really is a different breed of hero who ends up helping others but most definitely always helps himself as well.

The author does a great job painting a dark and a bit terrifying picture of corporate influence and control gone bad. The political and corporate world Gary Ballard creates is really not that far off if we're not careful.

The character development is excellent. The author does a great job adding interludes for individual characters. Having these side stories of the perspective of individual characters for a common event really made the story awesome. It was cool to see different angles of what's going on.

Joe Hempel did a great job in my opinion narrating this story. He kept things energetic and did a good job with different voice tones and accents for the various characters in the story. I especially liked the hitman and corporate bodyguard Poly. Good job Joe!

If you like technology, dystopian futures, or sci-fi and enjoy a smart story line then the Bridge Chronicles won't disappoint.

This Audiobook was provided by the author, narrator, or publisher at no cost in exchange for an unbiased review courtesy of AudiobookBoom dot com.

Not as good as the first book

I had a hard time with this book. I read the previous book in the series and enjoyed it, but I had the hardest time following this one. My interest kept waning and I was unsure of what was happening. I listened to the Audible audio version of this book narrated by Joe Hempel. He does a good job giving each character a unique voice, but I think I was just kind of over some of them. I honestly think that if I didn't read the previous book, I probably wouldn't be reading more of this series. However, since I enjoyed the first one, I will continue with the series in hopes that this one was a fluke.

Pick up the previous books before diving into this

*This book was provided to me at no cost by the author, narrator or publisher for an unbiased review via AudiobookBoom dot com

To be fair to all parties I did not buy the first two books in this series.. if I end up doing so I'll provide an updated review. . I go into every book with an open mind and the summary got me interested. That being said I was pretty disappointed with this book and it was difficult to get through without falling asleep. I finally gave up after about 5 and a half hours.

The author provides a "previously" to open up the book, but there is too much that happened in the previous two versions to get a good understanding of everything that must have taken place. Since I started with this book, I was lost from the get go. Its a pretty boring storyline that lacks excitement except for the occasional gang shootout where not a lot happens because of "magic" and lacks relationship development between the listener and the characters.

The narrator is pretty monotone except when he attempts a poor Mexican/gangsta accent. I'm a white guy with a decent Spanish vocabulary and was pretty annoyed with the accents. Along with the use of "el Diablos" rather than the correct pronunciation of "los Diablos", I lost interest really quickly.

If you've enjoyed the first two books then you may enjoy this more than I did, unfortunately I can't recommend this book based on the quality of writing and narrating.