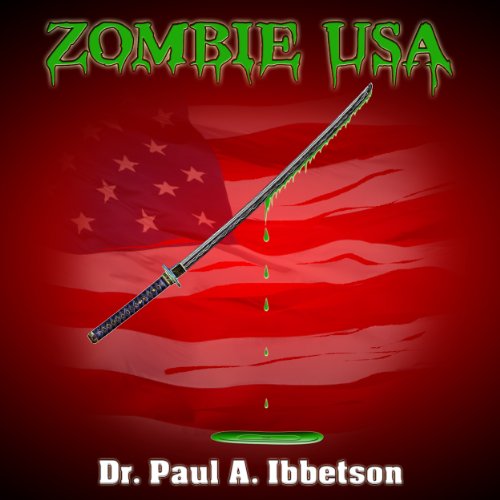 By: Paul Ibbetson
Narrated by: Dwight Goldman
Try for £0.00

Lt. Colonel Marcus Thorne is on the mission of his life. America is suffering through a zombie virus, that combined with a treasonous rogue President, threatens to destroy the United States. Starting in a secret underground military facility, Thorne will lead an unlikely group of adventurers on a dangerous quest across the country. A quest to save a Kansas senator whose body may hold the only anti-virus able to save the living from the walking dead.

Zombie USA is a story about the eternal fight for freedom against tyranny. This fast paced Political Zombie Thriller encapsulates a tumultuous world full of flesh eating zombies, back stabbing politicians, covert military operatives, and the overabundance of repetitious decapitations. Readers will enjoy every blood soaked page! The First Political Zombie Thriller Has Arrived!

What listeners say about Zombie USA

I loved the book and the story of this. I really like zombie stories. I love the way the story was created and started. The plot was good and the characters were awesome as well. I know this book could have been good but you should get another narator in your next books,

The story was good. However the narrator sounded strangely robotic, he didn't even seem to draw a breath.

The story itself was okay, but it was one of those cases when the author should have shown what was happening instead of telling what was happening. It all felt like I was being handed a plate full of facts with no feeling or context to it. I have no other way of explaining my dislike.

A robot for narrator with a great laugh

I really think this book could have been read my an auto robot. It is such a flat narration that really got to my nerves. The funny part is that out of the blue, there is a laugh in the story and the narrator is brought to life. He really does know how to make a convincing and real laugh. One of the best I've heard, witch left me confused, like there was a narrator with double personality.
Anyway, even if one could ignore the narration, the story in itself didn't grabbed me at all and I was very disappointed.
I've read a bunch of book by Paul and have to say his stories are not very consistent in terms of quality, so every story will be a surprise. One thing you can most certainly expect: it would have politics, moral and even a bit of religion in the mix. It seems to me the author writes to pass a message, so sometimes the story is worth it, sometimes (like this time) it's not.

Very enjoyable not sure about narrator

Started listening to this this morning as I started my day it is a well written and told story the narrator was good but there was something in his voice just did not fit the story. This is the first Zombie story I have read were the creation of the zombies was done on purpose by a callous person. I like the way the story was started in a way that while you are reading about what is happening now you being told why has happened in the past and this way you are understanding the story but at the same seeing good and bad of people are creating this issue or fighting to overcome and try to get back to a normal life again.

I really couldn't judge the book as I could not get in any flow. I tried listening it at regular speed, and a much faster speed to see if that would take out the odd stress and spacing, but I couldn't make sense of what was going on. The narrator does have a nice grounded speaking voice, but it sounded like each sentence was recorded individually and then edited together. It creates a strange stress at the begging of every sentence and they sometimes become disjointed. I made it about 45 minutes in before giving up because I really didn't know what was going on.

Gotta love zombies! Full of action and likeable characters. Not a fan of the narration, but not a deal breaker. Zombie USA is definitely unique among the zombie books I've read.

I received this audiobook from the author/narrator/publisher in exchange for an honest review.

I lovedthe story and the plot behind the story. The characters were well thought out and executed fantastic. The book was great and if it had a different narrator then it would have been better. The narration seemed chopped up or electronic, it was different and not seemless at all. You could tell when the narrator started again and ordered things together. The narrator also just didn't have to excitement or energy in his voice. Just was not blown away by him. Very monotone with very little inflection. That being said the book was great and could have been amazing with the right narrator. I would only purchase this book with a discount and not with a cherished credit.

I have to start by saying that I've listened to several zombie stories lately (almost one after another) and they've all been pretty good. I think the last zombie review I did, I stated that I couldn't remember having ever left a poor review for a zombie story. Well, I think I must have jinxed myself with that comment.

I couldn’t finish this story. I just couldn’t do it. It might have been one of the best zombies books ever written, but the narrator wasn’t working for me. That made it hard for me to focus on the story itself. This is a perfect example of how a narrator can make or break a story for an author. Besides the fact he couldn’t do a female voice, I don’t know how the narrator recorded this, but I swear it sounds like he did it line by line and then at the end put those individual sentences together. There was just no space between sentences. It was almost like one long continuous sentence. While I did like his voice, he’s definitely not a natural reader, that’s for sure! It was robotic (along with the dialogue) and too distracting, in my opinion. I hate not finishing a story, but I can only force my ears to do so much.

Either way, this came across (from what I listened to that is) more of the author telling a story as opposed to experiencing one. Not being able to experience the story isn’t going to reel the readers/listeners in. The fact the first thirty minutes seemed more like backstory and nothing more made it hard for me to even want to continue passed those thirty minutes (but I did, for a bit). I’m all for backstory; I want to know where the characters came from and any important parts about their lives. But when you “clump” the backstory all together, again, I don’t think it works. It would have been better had the author incorporated it more throughout the story, not all at once.

The president with blonde hair, who wants to make the country great again, and blames his opponents for the zombies. Can anyone say Trump? I’m not a fan of the man but still. Originality, please. Don’t think you can hide your political views in a fiction story. It’s going to very obvious to readers/listeners.

“The desk were broken in the Oval Office.”

The theme of this book was very clear and easy to follow. The characters were developed well, and the story moved along rapidly. The description made the reader feel like he was right there taking part in the action. I would recommend this book if you like science fiction.