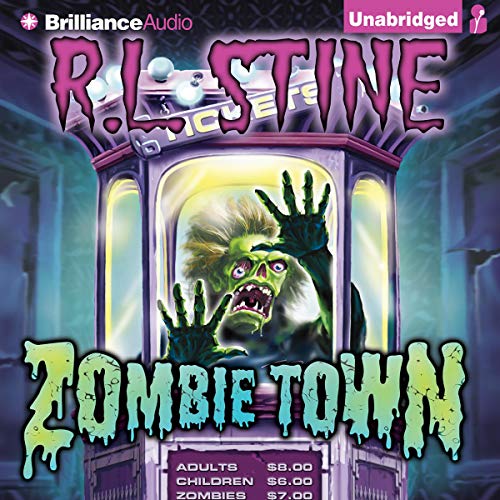 When my friend Karen took me to a movie called Zombie Town, I expected to be scared. But I never expected this - flesh-eating zombies coming off the screen and chasing us through the theater! And it’s not our popcorn they want to gobble! It’s our brains!We’ve got to get out of this theater and hurry home. The zombies won’t follow us - WILL THEY?

What listeners say about Zombie Town

The story itself was awesome! The sound effects and the narration made the story even better! It was only about 44 minutes, but it was worth every second!

Guilty pleasure book, loved goosebumps as a kid. Very similar to the old ones, so if that's what you're looking for I say go for it.

the narrators were good although the story felt it has no purpose , no depth of the story what so ever ,it felt as if the book was trying to end from beginning until end, they could have ended the book sooner but even then it shows the story had no depth ,they didn't try to create a story with this one..

I love goosebumps books although this one has failed , although it felt like a modern story there was no great detail of well anything ,they went over the top in explaining the characters but they didn't include any world to the story ,they didn't make you feel like ,what's happening or what's going to happen ? #

It's cool book with nice little story adventure. The performance was enjoyable especially since it was more people playing roles. The sound effects and music were a nice touch. Bonus point for me was also, that it's not a long book :)

A Different Take On Zombie Fiction

I've personally loved zombie stories for a long time and found R.L.Stine's version very interesting. Most zombie stories involve the so called heroes fighting off the zombies and saving the town. I was expecting them to escape, but instead they both lost. It was different to read a story where none of the main characters survived, but what else could you expect from the great R.L.Stine.

I listened to the audio of this book and loved the sound effects. this was a very good short story. I wanted something short and good and that's what I got. this is also my first book by this author. very impressed even if it is more a kids book. still very good.

R.L. Stine Still Has it in Children's Horror

Would you listen to Zombie Town again? Why?

I believe I would, though I'm losing my unlimited subscription in a week so it won't be as easy an opportunity beyond this.

The zombies themselves, they were gross without overdoing it, and his descriptions left them in that almost goofy green zombie mode instead of where Walking Dead has gone.

Basically any scene where Mike ran from zombies was good.

Not really, but its a fun children's story so I didn't expect any scene to move me either. There was a scene with some pop, but I don't want to give that away.

I've read probably 40 books by RL stine growing up, this is the first I've encountered in years, its good to see that his goofy sense of humor and plots are still intact.