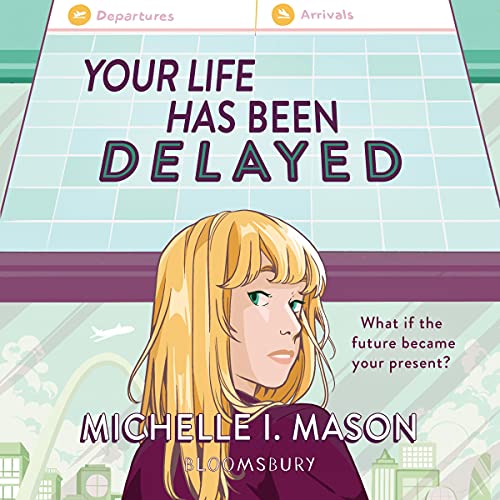 Your Life Has Been Delayed

By: Michelle I. Mason
Narrated by: Julie Rogers
Try for £0.00

Bloomsbury presents Your Life Has Been Delayed by Michelle I. Mason, read by Julie Rogers.

Past and present collide in a captivating YA debut about a girl who takes off on a flight and lands...25 years later.

When Jenny boards her flight back from New York, the biggest things on her mind are applying to Columbia and reuniting with her brand-new boyfriend. But when she and the other passengers disembark in St. Louis, they’re told that their plane disappeared - 25 years ago. Everyone thought they were dead.

The world has fast-forwarded. Three of her grandparents are gone, her parents are old, and her 'little' brother is now an adult. There’s so much she’s missed out on, not the least iPhones, social media, and pop culture. When some surprising information comes to light, Jenny feels betrayed by her family and once-best friend. She’s also fighting her attraction to Dylan, a cute and kind classmate who has an unusual connection to her past. And then there’s the growing contingent of conspiracy theorists determined to prove that Flight 237 hides a sinister truth. Will Jenny figure out how to move forward, or will she always be stuck in the past?

Debut author Michelle I. Mason offers a smart and funny high-concept debut about the most unbelievable of life changes - and the parts of yourself that can always stay the same.

"With its intriguing premise and approachable first-person narrative, this page-turner encourages readers to appreciate the now." (Publishers Weekly)

What listeners say about Your Life Has Been Delayed

When I first read the description of this book, I nearly jumped out of my seat, because it was that good. A girl gets on a plane that takes off in 1995 and lands three hours later in 2020. I knew this story was going to be something special. As someone who was born in 1990, I've only caught the tail end of the dramatic changes in technology and the world at large that the book captures so well. But it's not just the premise and the macro changes that makes this book so wonderful, but the painful immediacy of being with the main character, Jenny, as she navigates the changes in the world, the losses, social media, and freaky temporal issues. Grab a copy if you can. It's truly a stellar read.