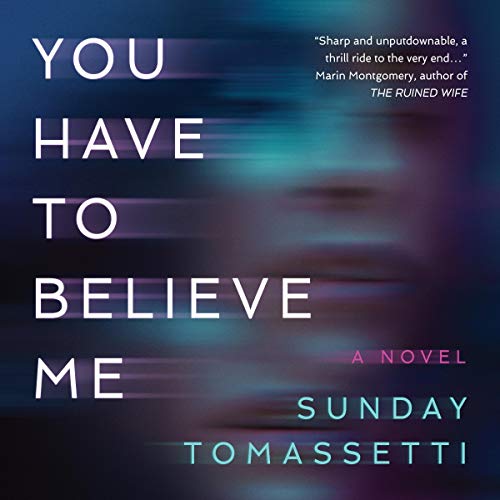 You Have to Believe Me

She has every reason to hate her ex...it doesn't mean she wants him dead.

Every day on her way home from work, Dove Damiani drives past her ex-house, where her ex-husband lives with her ex-dog and her ex-yoga instructor, next to her ex-neighbors and the ex-life she once affectionately described as “frighteningly perfect.”

To outsiders, Dove is bitter and resentful. The divorce left her alone, with nothing but a set of car keys and 50% of a paltry savings account.

So when the lifeless body of her former husband is discovered in the birch grove outside Dove’s apartment on what would have been their fifth wedding anniversary, investigators waste no time making Dove a person of interest.

She swears she didn’t do it. She’s never so much as killed a spider in her 34 years.

But as evidence mounts against her, Dove finds herself questioning her memory, her sanity, and finally - her innocence.

What listeners say about You Have to Believe Me

If you enjoyed the book You, which I did you will for sure enjoy this book , it kept me interested and I looked forward to when I could get back to it.

This book was better than average, but not over-the-top.

The two narrators did an excellent job. Overall, this was an enjoyable read.

Both narrators were awful. One tried to sound sexy one over dramatized. It was a pretty good mystery made almost intolerable to listen to. Would have made a better read. I hated the Kirsten character and I wasn’t sure if it was the character or the smug portrayal by the narrator. There was only a few narrators on my ‘avoid’ list. It just got longer with these two!

The narrators’ affectations are hard to tolerate. One of them both hisses and adds extra syllables at the end of words. I think she thinks it’s quite sexy. The other one adds syllables to the end of lots of words. I had to stop listening, though I guess the story was interesting enough.

The start was a bit slow and drawn out, but the book redeemed itself. Once it held my attention it turned out surprisingly well.

*Add this to your library people!*

Wow! I don't even know where to start with my review, I'm still reeling from the ending and a certain character's final act. This was novel was awesome and filled with a healthy amount of viable suspects! I made the horrible mistake of starting the novel just before bed last night. I was going to stay awake but I wanted to be able to formulate clear thoughts without the fog of sleep clouding my judgement. I awoke a little after 6 this morning to continue on with the case of "Who killed Ian?". Nothing got done today, oh well.

We have Dove, the ex wife and Kirsten, the new girlfriend and a dead man, Ian, at the center of it all. Who did it? As far as I was concerned, they all did it. Every character that was presented-aside from the police investigating the case-was my prime suspect. Lol. Seriously, it was really hard to tell who actually killed Ian because based on what you learned about each person: Dove, Ari, Kirsten, Noah, David, and Ian's mom there was a motive. Imagine my shock when the truth finally came out and then, the author decides to throw a "but wait, there's more" moment in as well. ***WHOA!***

Listen, don't pass this title up. Grab a copy by whatever means you find best and sit back and enjoy the ride.