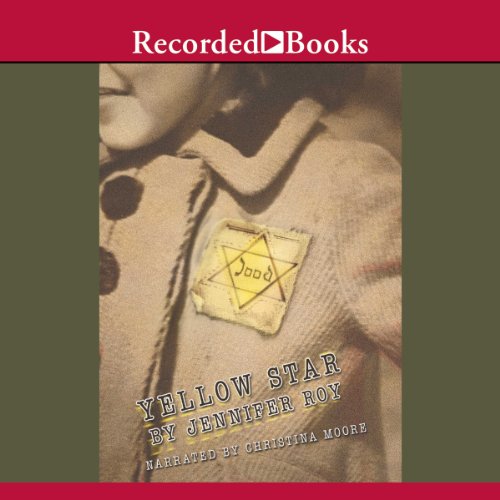 By: Jennifer Roy
Narrated by: Christina Moore
Try for £0.00

In 1939 the Nazis invade Lodz, Poland, forcing four-year-old Syvia Perlmutter and 270,000 other Jews into a ghetto surrounded by barbed wire and guarded by armed men. Scared and confused, Syvia and the others have no idea how terrible their lives will soon be.

When the Nazis start removing children "to keep them safe," Syvia's father does not believe them. He does everything he can to protect Syvia, even hiding her in a graveyard. For years the family barely survives, until Russian soldiers liberate the ghetto in 1945 and free the remaining 800 survivors. Among the 800 are Syvia and only 11 other children.

A Boston Globe - Horn Book Awards honor book, Yellow Star is a novelization in free verse of the true experiences of the author's aunt. It received starred reviews from Publishers Weekly, Booklist, VOYA, and School Library Journal, which proclaimed it a "standout in the genre of Holocaust literature."

"... what sets it apart is the lyricism of the narrative, and Syvia's credible childlike voice, maturing with each chapter, as she gains further understanding of the events around her." ( Publishers Weekly, starred review)

What listeners say about Yellow Star