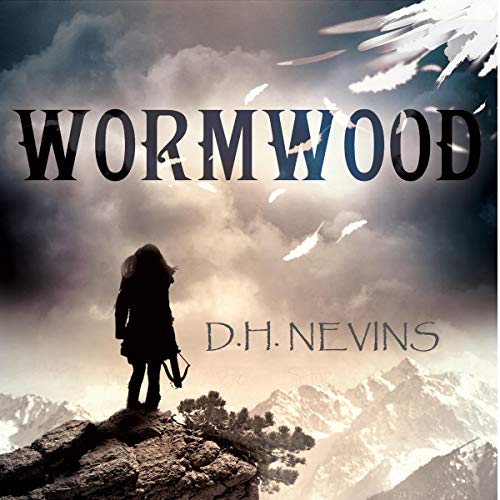 Tiamat and his brothers, a legion of 100 half-angels, have orders to send all humans on to their final judgment. Yet in a moment of weakness, Tiamat risks his life to rescue a hiker named Kali from the very destruction he initiated.

Kali, thrust from the surety of her world into the boundless hell of Tiamat’s, must try to find a way to survive on the Earth’s vast, devastated landscape. Plagued by a legion of Nephilim bent on sending her on, she is forced to trust the one being who could prove to be her greatest enemy.

What listeners say about Wormwood

I really tried to get through this story. I only made it three hours in. I had a long review typed up but my computer decided to not save it for me. I'm trying to remember what all I typed several days ago, but I only just now noticed the book was still in my "Currently Reading" category.

I'm sorry to author who seemed excited that I'd asked for a code because I found the part I did listen to as boring. It just wasn't holding my attention at all. I don't like forcing myself to listen to or read a story if I'm not feeling it.

I remember I had an issue with all the back and forth with Kali and whether she liked Tiamat or not; I found it to be annoying. Even worse was how Tiamat and Kali would be nice to each other one second, then turn around be mean. It was an emotional rollercoaster but not in a good way.

A random thing that just popped into my mind was the fact when Aden showed up, Kali seemed surprised that he knew who she was... when she was the only human left. Actually there were several issues I had with Kali and her lack of smarts that seemed to become obvious during her conversation with Aden.

I wish I could remember the exact details. Usually I can provide a nice lengthy review explaining why I wasn't a fan of the story, but I can't.

I know with the narrator, I found her to have done an okay job. There were times when she'd pause in the middle of talking, for whatever reason. Other times, I felt she might have been a smidge too emotional when she spoke for Kali.

I received a free audiobook code in exchange for an honest review.

Unlike anything I’ve read

I’ve listened to a wide variety of genre, with the exception of non-fiction, and I've recently listened to a good number of supernatural books so I thought this might fit right in. I've also listened to a number of books with Nephilim...but I have to say that this is a new one for me. I wasn't sure how I would deal with such a morbid topic, but I was pleasantly surprised with how the story began to play out. I like Kali as a main character and Tiamat shows potential. I would like to hear how the author intended the names to be pronounced. The narrator pronounces Kali like Callie instead of the Hindu pronunciation of the goddess of destruction. Otherwise this was really an interesting read. I can honestly say that I had no idea where the author was going with it so I was just along for a good ride. Following the relationship dynamic between Kali and Tiamat resulted in whiplash. I mean, it was more than hot and cold...it went from one extreme to another. Somehow, despite everything that was said and done, I could not paint either character as a villain. I see this as good writing. Their feelings for each other may have been considered to be too strong and sudden, but given their history and the apocalyptic setting, I can totally see how one might latch on to a familiar person. One of the things I love most about this book is the author's / Kali's awareness of her actions. There are times that I thought "Why would she feel that way" or "Why would she do that?" Within the next few minutes there would be an answer to my question. That is to say the main character has good insight...and that is missing in a LOT of the books I've read. The author also goes out of her way to explain in detail things that might otherwise be glossed over otherwise, making me think that she might have some background in science (which, as a scientist, I appreciate). There were intense moments in the book, but not so much that I had to take a break from listening. On the contrary, it was hard for me to stop listening to this book after the first few chapters. Also, we don't find out why it's called Wormwood until the latter half of the book, and when we're given that explanation, I almost felt like I needed a prequel to really understand Tiamat's character. The narrator was okay. She gave Tiamat a kind of clipped, nasally voice that took away from the angelic portrayal of that character by the author. Otherwise, I can't say that she made the novel less enjoyable.
Wormwood was an innovative romantic post-apocalyptic novel. I can honestly say that I haven't read / listened to anything like it before. This is part of a series I believe and I'm interested to see where she takes it in the next book. It can definitely be emotionally charged and so I would anticipate moments where you might stop what you're doing to process what is happening. (i was given this book for free in exchange for a voluntary and honest review)

Fresh new take on the Nephilim

This story was very captivating and so, well written. It didn’t fall into the typical Nephilim trope of similar stories. I couldn’t put it down once I started. The narrator does an awesome job with all the characters. The only downside to the production was you can hear her take in breathes at times. I do hope the author continues the story with another book or two..😉🤞🏻I will definitely be purchasing if/when there are!!! Most definitely worth a credit!! You won’t be disappointed!