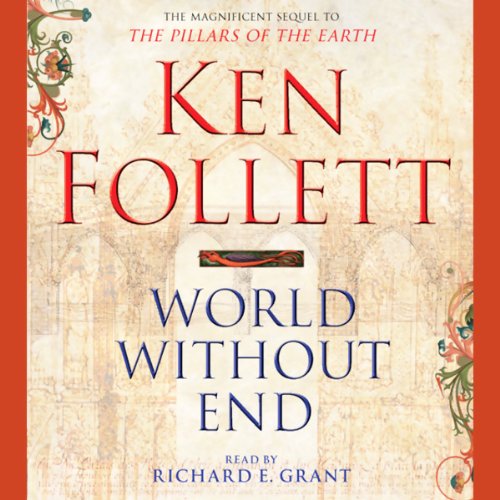 On the day after Halloween, in the year 1327, four children slip away from the cathedral city of Kingsbridge. They are a thief, a bully, a boy genius, and a girl who wants to be a doctor. In the forest they see two men killed.

As adults, their lives will be braided together by ambition, love, greed, and revenge. They will see prosperity and famine, plague and war. One boy will travel the world but come home in the end; the other will be a powerful, corrupt nobleman. One girl will defy the might of the medieval church; the other will pursue an impossible love. And always they will live under the long shadow of the unexplained killing they witnessed on that fateful childhood day.

Ken Follett's masterful epic The Pillars of the Earth enchanted millions of readers with its compelling drama of war, passion, and family conflict set around the building of a cathedral. Now World Without End takes listeners back to medieval Kingsbridge two centuries later, as the men, women, and children of the city once again grapple with the devastating sweep of historical change.

What listeners say about World Without End

This is the second Follet book about Kingsbridge. Set in the mid 14th century it shows life of the town and church during this period. Life for the ordinary people was dominated by the church and the aristocracy who controlled their lives through religion, fuedalism and the law.

This is the time of change when more ideas were being circulated and exsisting premises were being questioned or challenged; exciting times with the growth of trade, especially the English wool market, but the spread of the plague from the East westwards around 1348 or a little earlier saw a decimation of the population and a reduced population struggle to feed itself afterwards.

Ken Follet explains various aspects of the period and takes the listener into the lives of the characters. This period and the struggle for minds and souls of the people of Kinsbridge and the surrounding area are brought to life by the excellent reading of Richard E. Grant.

This is not a dry tale but a story centred on Murfin and Charis and their love and struggle to be together; their fight for the town and townspeople against the Abbey and Abbots of Kingsbridge who does not seen that its wealth is linked to the prosperity of the town.

If you enjoyed 'The Pillars of the Earth', part 1 of this saga, you will like this too.

Really good story and kept me entertained on long car journeys. well read and worth a listen.

I believe that although this was a very exciting read, it did more for me as regards history than anything else. Yes obviously fiction, but the detail of both the building methods employed, and the solutions when things failed, and the development of medical knowledge as the plague struck (the successful methods being developed by women not going unnoticed!); also the corrupt life led by the priory and the kings men etc etc. Not much changes - oops!

Couldn't put it down.

I enjoyed this book as much as Pillars of the Earth. World Without End picks up the history of Kingsbridge a couple of hundred years later. Again, this isn't a conventional book, as it doesn't exclusively follow a 'hero' or 'heroine', but rather looks at what's going on in Kingsbridge (a fictional town) through the eyes of several of the townsfolk over many years during the 14th century. I enjoyed hearing about ways the plague affected the people who survived and the intrigue centred around the church and nobility. You really get to know the characters as you learn about their desires (however grand or seemingly trivial (to us)) and tribulations. Richard E Grant's reading is excellent. It's not a 'thrilling, adventure novel', but it is an fabulous example of historical fiction. I was sad to finish it, and wish there were more in the series.

not matching the book

very bad, no full story, jumping words, frases and paragraph. no worth the time money effort.

This series is a real must taking one through several dynasties with accuracy . History and strategies laid out. It really is a trilogy to consume . KF you have given me hours of pleasure. Wow the labour and creativity that has gone into these books. Thank you for transporting me to the middle ages

I thoroughly enjoyed this sequel to the Pillars of the Earth. It stands alone as well so you don't have to read the first book to enjoy this (although I'd definitely recommend it).

It feels as if ken used scraps from his last book and escalated them into a different storyline, the first few chapters were very monotonous, the story doesn't really engage until halfway through the book, it feels as if he was writing automatically and had no real care for the characters until he got into the swing of the storyline, worth a read but not as enthralling as its predecessor

some books draw one in so much tbst they need reading a second time to optimise the books potential.

Very similar to the prequel

'World Without End' is set 200 years later than Ken Follett's 'The Pillars of the Earth' but takes place in the same town, Kingsbridge.
I loved The 'Pillars of the Earth', I couldn't put it down, the story was very unusual, interesting and original. I was looking forward to 'World Without End' immensely but from the start I was rather disappointed because I felt the storyline and the characters were the same as in 'Pillars of the Earth'. The themes that run through the sequel are the same, the heros and the villans are very similar and their struggles and conflicts echo those in the first book. By the end of the book I was tired of the characters and had completely lost interest in the outcome. I finished it because it was an audiobook but I don't think I'd have persevered if I'd been reading it.
I think that if I had not read 'Pillars of the Earth' first I would have enjoyed this book much more and for that reason I have given it 3 stars instead of 2.

Ken Follett’s earlier book “The Pillars of the Earth” has long been my favourite book of all time. This book takes us back to Kingsbridge 200 years after the first book. I was a bit apprehensive that it would pale in comparison; however I was delighted to find that this book is a masterpiece in its own right.

Ken Follett creates characters that you can deeply identify with and find yourself caring for as the incredible story unfolds. The book gives a rich historical feel of what it would be like to be living in those times, while keeping the storyline lively and engrossing.

“World Without End” is one of the most brilliant books I have ever read. The Audio book is superbly read by Richard E. Grant who brings the book to life. It is unfortunate that it is the Abridged version but never the less it is still a gem.

I Accidentally downloaded the abridged version of this book. As I was listening it skipped ahead and was not comprehensible. Get the unabridged version

Normally I only download unabridged recordings. I Really wanted to hear this one so I broke my habit.... derrrrrr.... unsmart move. At random and unexpected moments the abridgement lurched into the future, leaving story threads dangling unsatisfatisfyingly and then slamming up against new situations and characters quite out of the blue. It was possible to work out what was going on, but rather irritating to be dragged out of the fluid magic of a storyteller to sort out a tangle not created by the author.
Don't recommend the abridgement but gave 4 stars for Mr Follett's storytelling.