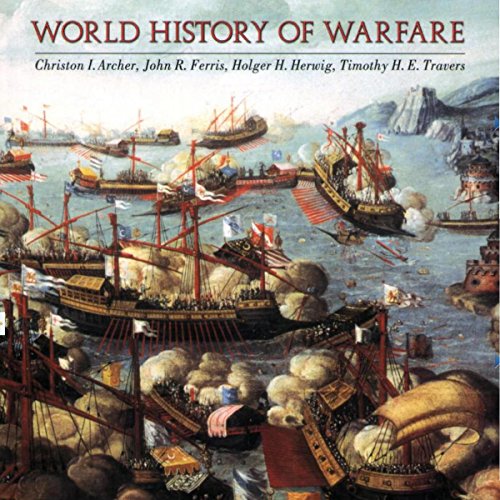 World History of Warfare covers worldwide military history from ancient times to the present and is designed for college courses. Its principal theme is an exploration of change and continuity, revolution and tradition, in three thousand years of warfare. It teaches students and general listeners how warfare evolved and how that evolution affected human society, with emphasis on major turning points in the conduct of warfare rather than a superficial general history of wars.

Although the volume addresses traditional subjects such as generals and tactics, each chapter also includes discussion of the idea of war, the role of the common soldier, and the changing interpretations of the military’s place in society and politics. Of special value is the authors’ treatment of non-Western societies and the role military forces have played in shaping societies worldwide.

"Belongs on the bookshelves of anyone interested in the phenomenon of human conflict." (Dennis Showalter, past president, Society for Military History)

"An outstanding reading text on the history of warfare from its origins to the twenty-first century." (Air Power History magazine)

What listeners say about World History of Warfare

Buckle up - you're in for a rought ride

I wanted to like this book; had I read it, I probably would. I was constantly sidetracked by the horrid narration. You cannot go beyond 4 minutes without encountering a mispronounced word; in some sections, you cannot go beyond 30 seconds. One would hope (and one might reasonably expect), that a narrator of a non-fiction book concerning warfare as it existed from pre/proto history, through the various geographies of Greece/Rome/China/Japan/Korea/Europe/Africa/America, would either have a familiarity with the major languages in those areas/times, or at least seek to familiarize himself with them. Nope. The sections on Greece and Rome are atrocious. He leaves these chapters littered with the corpses of the many words/concepts/people he's mangled along the way. The sections on European warfare are no better. Even his pronunciation of English is at times odd, as if he's reading words he's never heard pronounced. If you prefer that narrators narrate unobtrusively, this is certainly not a book for you. The content was good, but the narration was so awful, I have to demand my money back, and I'll buy the book instead.

Overall, a worthwhile read, some parts are stronger than others, but it builds upon the preceding sections, culminating in the latter part (around chapter 22, I believe), where it really gives sharp conclusions to the whole continuum of warfare through the ages. This particular section was the gem of the whole book, which can really be appreciated in the context of the preceding chapters.
Importantly, book covers both east and west in good detail.

Few parts of the book are based on outdated scholarship, but are not critical drawbacks in the context of the aim of presenting overall history of warfare. Nevertheless, be mindful that some details here are considered inaccurate by contemporary scholars.

Valuable read, fairly engaging (though not exceptionally so), with few small flaws.

This was a great read from start to finish. The format and information flowed seamlessly and made it really easy to picture the battles and engagements in your head. I recommend this to anyone who wants to study warfare and it’s impact on our history.

Definitely a great book to read or listen to. Especially if you do not know much about world conflicts.

War may well be the “Oldest Profession”.
The historical insights put forth outline a clear path through human history in which war seems to have been ever present. The role war has played in economies, technological advancement, and societal development for thousands of years is both eye opening and frightening. Kudos to the narrator on his ability to navigate a mine field of words from dozens of languages, and his beautiful pacing throughout the 28- hour long production. Well done!
Again, everyone should listen to this book.

This was my textbook for a class on Military History. This book is engagingly written, well organized and served as a thought provoking prompt for each 2 hour class. Not for the casual reader, but more for someone sincerely interested in Military things such as what is war, and how does one define a total victory? I really enjoyed this book and have kept it on my bookshelf for reference.

The content of the book is critical for a good foundation in military history. However, the performer so often, and so frustratingly, mispronounced common words. I nearly lost the ability to finish the book.