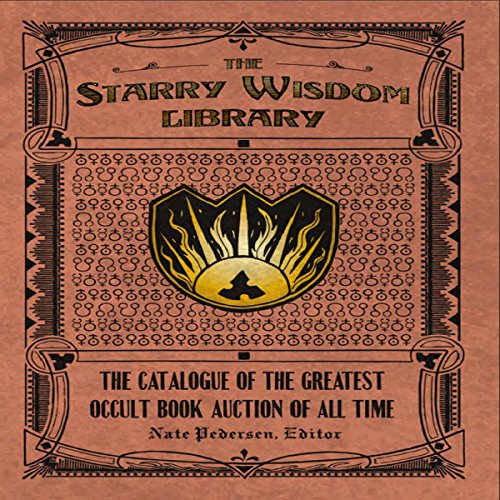 The Catalogue of the Greatest Occult Book Auction of All Time
By: Nate Pedersen
Narrated by: Scott Carrico
Length: 8 hrs and 53 mins
Categories: History, American
4.5 out of 5 stars 4.3 (3 ratings)

Scholars and book collectors across the country have long pondered the intended fate of the infamous collection of rare occult books left to rot in the Church of Starry Wisdom in Providence, Rhode Island, after the Starry Wisdom cult dispersed to parts unknown in the late 19th century.

The recent shocking discovery of a previously unknown book auction catalogue issued in 1877 offers insight into the myriad mysteries of the cult. Entitled Catalogue of the Occult Library of the Recently Disbanded Church of Starry Wisdom of Providence, Rhode Island, and issued by the notorious Arkham firm Pent & Serenade, the catalogue reveals the long-suspected fact that the church intended to sell its library to finance its removal from Providence. The sale, of course, never materialized, as later events make obvious, but the book auction catalogue informs us of the cult's original intent and leaves for us an enormously valuable and fascinating piece of ephemera detailing the infamous collection of rare occult books in all of its dark and foreboding glory.

Furthermore, the book auction catalogue is unique among its contemporaries in that the auction firm Pent & Serenade, recognizing the importance of the exceedingly rare volumes in the cult's possession, commissioned a wide variety of 19th-century scholars to write essays on the histories of the books offered at auction. As such, the catalogue is a uniquely, almost absurdly valuable item for scholars and collectors around the world and is presented here in exacting facsimile by PS Publishing.

A dive into the Mythos

A treasure trove of information on the books of the mythos. Great fun, well read.

A general grounding in Lovecraft`s mythos will aid in fully enjoying this anthology ( that bibliophilia not be incompatible with the former qualification is hardly a wild gamble ).
Amongst the contributors, Mr. Campbell ( not surprisingly, especially given that the tome covered is his own Revelations of Glaaki. which, by the way, makes his additional details canon ) Ms. Chambers, & M. Pugmire, all deserve special praise.

Less praiseworthy, one fears, are the contributions of Ms. Cuinn, Mr. Gavin. & Ms. Tidbeck, though mostly due to their lack of respect for their source material. L'Image du Monde is hardly an obscure text: De masticatione mortuorum in tumulis has not been, as far as one is aware, the subject of as much study, but it still managed to be published, in English. by Montague Summers, Cultes des Goules may be pseudobibliographical, but has a robust canonicity, regardless - though, at least, Ms Tidbeck`s description of its impact on the Swedish royal court is well researched, & not without wit.

There are limits to the liberties to be taken with such well-established works, especially if the results do not contribute sufficiently to the mythos.

True to the mythos with very good voice work. Large selection of important work to learn about.

If you are into this, you'll totally be into this

I'm a gamer, totally lame and proud of it. So for me this book fills that warm little niche I have in my soul for ephemera that compliments canon. It is very complimentary to the Cthulhu Mythos Encyclopedia building on what is already out there and weaving new possibilities into the stories. I listened to it once, went back through laughed at some of the simply diabolically elegant stories presented and immediately purchased it in hard copy.

This is obviously a fan-boy review, I'm good with that. I think if you are into this kind of thing then you are totally going to be into this book.

So why the four stars in Performance and Story? It's not due to disliking the reader, in fact for all the engineered words, languages, simply fabricated -stuff- he does an amazing job, brava, I simply would have liked just a little more with regard to the auction and hints as to the disposition of the library. A thread to pull.