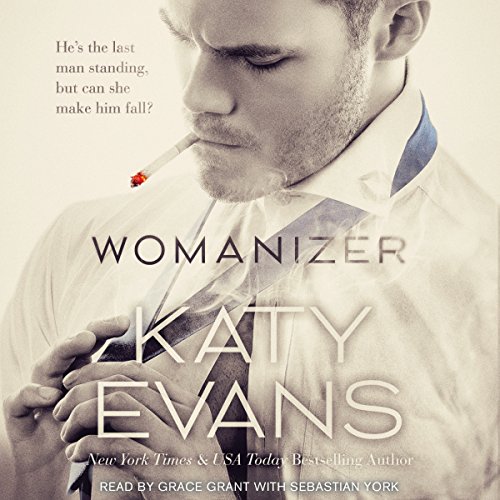 By: Katy Evans
Narrated by: Grace Grant,Sebastian York
Try for £0.00

We were just two strangers. Facing a forbidden attraction, a chemical connection. Neither of us expected or wanted it to amount to more.

But I had never been drawn to a guy the way I was drawn to this one: my brother's best friend, and CEO of the company where I interned. Even knowing I should stay away, I proved to be too human after all.

The chemistry was amazing.
The laughs were incredible.
I opened up to him in more ways than I'd opened up to anyone before.
But sex was as far as I'd go.
Just sex, because he was too irresistible.
Just sex, because I wouldn't be falling for him.
Just sex, because I'd leave in three months, and I'd like for my brother not to kill me and for nobody to find out he was my wicked little secret.
He wasn't the One.
He was just a womanizer.
But for a time, he would be mine.
©2016 Katy Evans (P)2016 Simon & Schuster Audio
Women's Fiction Contemporary
Show More Show Less

What listeners say about Womanizer

A full five stars from me

And I'm back in the game! After the slight let down I felt after reading Ladies Man, I'm back in 5 Star heaven with this fantastic follow on, Womanizer. I loved both Olivia and Callan. Womaniser or not, Callan never showed Olivia any disrespect, and for that reason alone, you could fall in love with him, but he just keeps all the niceties coming. Olivia on the other hand is, it would seem, the slightly more stubborn one with her life plan being a bit of a spanner in the whole happy ever after thing. Loved the story, the writing, the narration, and the whole steamy package. A full 5 stars from me, although don't be fooled into the whole Sebastian York narration, he only narrates for about 2 minutes (a fab 2 minutes though).

I enjoyed this storyline but at times it felt lacking and rushed. Her immaturity I felt was evident. The narration was ok, even though at times I felt frustrated with slowness of Grace's voice when she was talking on behalf of Callan, then in itself made it very hard for me to try to connect and understand the character

Grace Grant's male voice is not a good voice for this character. Sebastian York, who has the perfect male voice reads 5 minutes or so near the end of the book, what's that all about? I don't think his name should not be listed as one of the narrators.
Plot line wise, ok, a followup to all of the Manwhore cast.

The book is great don't get me wrong. It was like waiting and waiting for something to bring the book alive ( like Sebastian York), but it never happened.

I enjoyed the Grandmother full of wisdom.

What about Grace Grant and Sebastian York ’s performance did you like?

Okay let me start by saying that 4.61 minutes of Sebastian York narrating was a freaking joke to his fans. Biggest disappointment ever, I would have given it 5 stars, but the fact that I waited chapter after chapter for him to pop up. I got teased with a 1.25 min of him towards the end. Then you think it's okay to give his fans 3.36 min that was some BULLS@#*^.Grace Grant did a great job, but she really need to work on her male voice. When I search a book that says Sebastian York, I would like more than 4 minutes.

The story line is very pretty. I would have never bothered listening to it if I didn't know that Sebastian York would not be narrating. It's a great book just don't lie to his fans making it seem as he is narrating in the book.

I love the "Reformed Manwhore" story. Callan and Olivia's story is the perfect example of this. Callan is somewhat of a mystery in the beginning. I really loved how Katy wrote the beginning of their relationship.

This is one of the best in the series. Manwhore Down!

I listened to this on Audible. The narrators were very good. Grace Grant did a great job as Olivia. But when Sebastian started reading in the end, *swoon*. He is the perfect Callan.

BEST ONE IN THE SERIES FOR SURE!

I was losing faith in Katy Evans for a minute, and then here comes Callan's Story! OMG! This one was really close to perfection. I would've enjoyed a little more Sebastian York--I'm not a fan of Grace Grant's "man voice" really--BUT all in all, this book was EVERYTHING! Olivia and Callan were awesome together. Their dynamic was funny, and I loved the banter and sass between them; Callan was like a dark horse in the man-candy trio of Tahoe, Callan and Saint. I loved his character and loved him with Olivia. Bravo Katy Evans, job well done!

This way a great addition to the manwhore series, but I feel like it was no build up. The charters slept together without knowing each others names. I was like sheesh that was fast... a couple of shared cigs on the terrace and next thing you know BAM! I missed the buildup to passion like the other charters had. Worth the credit, a must read.

Katy Evans can describe romance like no other author. She does a wonderful job of building tension between the two.

Sebastian has about 6 lines in the last 25 minutes of the book. Did I say I was pis*ed. I feel cheated.

The story is good. We all know Callan is the last hold out of the trio and is going to find true love. The story moved along nice without fluff and a lot angst. I really did enjoy it.

I like Grace Grant but the slow talking male voices were hard to get use to.

Kathy Evans has created a gem of a series.

Worth the credit/$ Even though I liked the story I'm returning the book because I feel cheated.

This audiobook was sexy, funny at times and romantic. The hero is a CEO with a reputation of being a playboy womanizer, having a huge list of conquests. The heroine is the little sister of his best friend, who has come to the hero’s company to do an internship. Attracted to each other, they begin having a sex only office romance knowing she won’t be there but a few months. And they certainly didn’t want her brother knowing what they were doing! But feelings start developing and they have to decide where to go from there. Narration was excellent!

This was my first book by Katy Evans! I freaking loved it! The chemistry between Callan and Olivia is off the chart. I loved the banter between them, her relationship with her brother and of course her Nana. I didn't want to put this down! Make sure you read this!

Omg that was one of the most exciting book that I have read. The story and bring Back Thoe and Gina, was super. I love it when you find out what happens in the life of the characters in books that you have read before. I want to know more, please write another book.
Thanks for the stories. Excellent book.