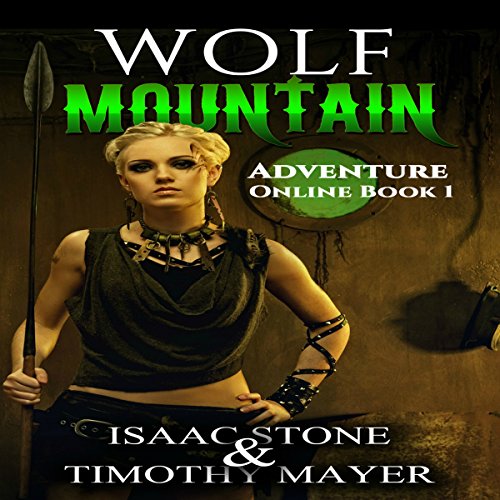 Vince is a down and out millennial with an advanced degree in archaeology and an endless parade of dead end jobs. Crushed by student loan debt and bills, he is barely making ends meet, and his one source of relief is gaming. Vince gets a mysterious job offer from a gaming company to be a beta tester for their new full immersion virtual reality system. He doesn't understand why they chose him over literally anyone else on the planet, and is suspicious that he got the offer on the same day he got fired, but he's flat broke. Besides, who wouldn't want to get paid to play?

Soon, Vince finds himself taking the role of a treasure hunter immersed in a 1920s pulp adventure filled with deadly bootleggers, spooky caves, lost airships, and a beautiful spear hurling girl who was raised by wolves. It doesn't take long for Vince to realize something fishy is going on, and there's more to this game than meets the eye. He must make his way from plot cache to plot cache as he searches for lost jewels, the truth about the game, and enough ammunition to keep the tommy gun barking.

What listeners say about Wolf Mountain

Vincent is fired from the dead end where he works. Soon after he gets a call from a gaming company offering him the job of his dreams: becoming virtual reality game tester. The game is set towards the end of the 1920s, and he will have to find some jewels lost in the middle of the woods where a plane belonging to a rich family crashed some years before.

First of all, this book is not exactly written as a LitRPG, even though it describes the actions of the characters in the game. This could make it more accessible for people not really into LitRPG.

I found the premies quite interesting, but the execution was poor. The book basically narrates how Vince is hired, his experience in the game and a twist at the end of the story. The adventures during the game were just okay, but not enough to really get me hooked to the story. It was entertaining, yet, but that’s it. I was expecting all the time for something to happen, like some serious issue related to the VR chamber.

This is one of those cases where I think the authors stretch a story over several volumes just for the sake of the sell. I think the story would really benefit from having this book just as an introduction to the real story: Vince gets hired, he plays the game, and then something happens. From there then I would develop the story, but keeping it in the same book, and shortening the gaming part considerably, since nothing important happens and the characters are quite plain. The important and disconcerting things happen outside the game, so I think the authors should have focused this book on that part.

The book is well written, so I was able to listen until the end, but what got me interested was that twist towards the end. It is a pity that the rest of the book did not get me interested enough, so I doubt I will continue this series.

J. Scott Bennett narration was great, as usual, and I think it was part of the reason why the gaming part was bearable. He has an ample range of voices and his character interpretations are very vivid. About the audio production, I noticed a couple of silences between paragraphs, but nothing disturbing.

When out of work telemarketer and game enthusiast, Vince, is recruited to beta test an innovative full immersion game, he thinks he has struck gold. Set in the 1020’s, his mission in the game is to recover lost jewels, but he becomes attached to the game characters and unexpected problems occur once the game is done. I found this more of a mix of litRPG and an alternate reality adventure story, rather than straight litRPG. The narration in the audiobook is great, he brings the characters to life, brings out the individual personalities and does male and female voices and accents excellently. The story was enjoyable but it lacked a lot of detail and had many threads left untied at the end. Also, if that company had designed a machine that induced true stasis, where a person didn't age, have to eat, drink or use the bathroom, I'm sure there would be much better and more profitable applications for it than a virtual game.

The Mystery Only Grows When the Game Is Over

I believe that the best LitRPGs connect events in the real world to the game world, and that is one of the things that Stone and Mayer do very well in their novel, Wolf Mountain. The foundation of the story is not particularly original. A game company is testing out new technology and the protagonist, Vince, is hired to help test it. He is immersed in a game world and has to see if he can beat the system.

The game setting is a mountainous area of the U.S. during the 1920s—not a time period I’ve seen before in this type of book. The authors don’t bog the story down with countless repetitions of character sheet stats, but you never forget that this is in fact a game environment. As the action progresses, Vince becomes romantically interested in a well-developed NPC and after completing his employment becomes obsessed with learning how she was developed and whether or not she was based on a real-world individual. The game designers oppose his interest and then things get especially interesting as Vince begins to have problems differentiating between the game environment and the real world even though he is no longer attached to the equipment.

In many ways, Wolf Mountain is a set up for an even deeper mystery surrounding how the game was developed and what the company that owns it is trying to accomplish. That’s a tale worth telling.

I received this book from FreeAudiobookCodes.com in exchange for an honest review.

This is a good story with a good narrator. Enjoyed the online adventure but the story does not end there.
This is labeled as book one so there is hope that more is coming. This book leaves you hanging although not really with a cliff-hanger.

Ready for the next book!!!

Game within a game

This story had lots of layers and twists in the plot that kept me hooked throughout. I hope there is a follow up so I can find out what was really behind the game. Good narration helped define the characters better as well.

Really enjoyed this book by Stone and Mayer. I will jump at the chance to read the second one ( if there is one coming). Thanks J Scott Bennett for a great performance.

Not My Cup of Tea

Let me start by saying that this was the first time I’ve read/listened to RPG type story. Now I don’t know if this book is how they normally are or not? Either way, I wasn’t a fan!

I was surprised that given this story was written by two authors that there wasn't more to it. It was so boring! The only reason I decided to listen to this story was that Scott Bennet is one of my favorite narrators. I feel sorry that he had to read this. There was nothing surprising!

Given the fact Vince goes into a virtual reality game, you'd think there'd be something exciting that place. There was nothing different given the time period, except for the large scorpion, which didn't really do anything to anyone. There was no point to even have it in the story.

The characters were very one-dimensional and as I listened to the story, I was left hoping that something bad (something out of the ordinary) to happen to one of them.

The cliffhanger at the end left me with no urge to continue with the series (if it ends up a series). Because of the lack of "entertainment," I don't care what happened to Vince or why the wolf girl was supposedly in the real world.

Vince doesn't seem that smart. When the wolf girl sees that he has a scratch on his hand she ends up finding a fungus and putting it onto Vince's wound. Why is he scared that it's going to do something bad when the wolf girl has only done good things for him and his group?

At one point, Vince asked how long the wolf girl had had her wolf. She tells Vince that her mother hadn't wanted the wolf. That made absolutely no sense (even if it's a game--it's virtual reality) because she'd been alone for over twenty years and wolves live 5-6 years.

The gang is stuck in the cave and the bad guys are right outside the cave entrance/exit. To get their attention, Vince yells out the mother joke. Seriously? I guess because of the flow of the story, this worked since 3 guys came running in. Stupid.

How could Clark ever get confused with the being in the game and reality? That made no sense!

What was the point of the nonexistent sex scene between Vince and the wolf girl?

I found it funny that the fact Vince had to use the toilet only came up at the end of the story. I assume he was used to pooing and peeing outside prior to participating in this game?

Vince is struggling for money, hence why he takes the VR tester job. Yet, he goes and pays to find out who the guy was that created the wolf girl? Why exactly?

Why did Vince never ask what was wrong with Hanz considering he says he looks in his forties? But wait! After he dies, Vince describes him as being old. I wouldn't consider forty to be old.