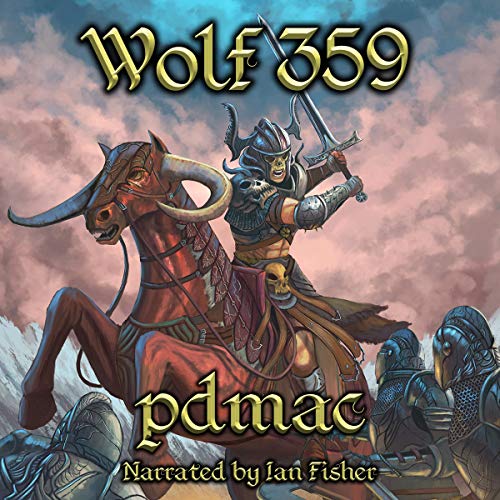 The spaceship destroyed, his family murdered, Duncan finds himself stranded on a planet circling Wolf 359. The only other survivor is a beautiful gladiator named Alexis.

Together, they encounter a civilization whose past reaches back only 1500 years. Their fortune stumbles from the start when Alexis is immediately forced to fight the nation’s berserker, who underestimates his opponent and pays dearly for it. Yet, no sooner is she awarded his position, title, and wealth when she is called upon to lead the nation’s warriors in the first full-scale battle she has ever experienced, against an enemy who takes no prisoners.

With the very real possibility of Alexis never returning, Duncan is left alone to fend for himself. Calling himself a wizard of the universe, he is brought before the Council of Prelates to explain his obvious heresy. Deftly answering their questions, he throws caution to the wind and challenges the nation’s high priest, Vix, to a contest of divine favor. The one who calls down thunder and lightning from the sky is the chosen one of God and becomes the nation’s high priest. The loser dies.

Angry and nervous to be cornered into an arrangement that might reveal his own heresy, Vix quickly decides to preempt the contest by having Duncan murdered. Though he survived a destroyed spaceship, can Duncan now evade assassins? Can he really call down thunder and lightning?

What listeners say about Wolf 359

what a load of s**t. I wasted my time. The characters are lacking, the story lacks originality and the plot is stupid.

The stupid is strong with this one

So long and short, the main female character is a gender swapped muscle head survivalist written with the worst version of those tropes. The male mc could have been interesting if he wasn’t so damned whiny. Over all I picked this up for medium/hard sci fi because that’s what the first several hours promised. Then every character went to the stupid side. Like the “we’re in strange new world where we know nothing, we need to get rid of our guns because gun make us careless” level stupid. Or, were safe on a spaceship with the collected knowledge of humanity, but oh look there’s a planet let’s go and jump into the unknown because, freedom? Challenge?

The long and short is I got half way through this book and couldn’t finish. The lack of intellect, character development, shitty writing that rarely bothered to show what was going on and the stupid. Just so much stupid.

This story opens well, with a presumably Sci-Fi storyline. Then escalates into a very involved and detailed adventure. It demands a sequel!
I recommend this book for ages 17 and older due to some strongly suggestive situations and violence.
I was given this audiobook for free and I freely give my opinion and rating.

I was given this free review copy audio book at my request and have voluntarily left this review. It was a nice blend of sci-fi and fantasy. My only complaint was I had a little difficulty getting into it. Once I did I enjoyed it. This may not be everyone's favorite but it was worth giving a try.

*DISCLAIMER* I was given this free review copy audio book at my request and have voluntarily left this review.

I was kicking this series around for awhile and after being offered a review copy I'm glad I got the chance to listen to it because it was definitely enjoyable. I love stories that mix elements of fantasy and sci-fi and this story did a great job of mixing it into an interesting story, even though it is more straight fantasy after the beginning. There were some misses in the story for me, I enjoy a good political conflict and the way this one was setup was good but it seemed to jump around a bit for me in the beginning and reminded me more of the short story collection of the first Witcher novel that decided to end with a more cohesive story. I can also understand relationships for political gain, a typical story trope by now, but the different ones the "develop" in this story feel more forced because there should be one in a book. I haven't moved to the 2nd book yet so maybe it develops more in there but for now that's how I feel about them. Overall it was really good and enjoyable and the narrator did a great job, I would recommend it to others that like this kind of fantasy story.

This book is awesome!

I would have to say this book is one of my favorites that I have listened to this year! Will definitely add this series to my watch list to see the new audio books come out! It has a little bit of sci-fi, human moding, and fantasy in it. PD & Ian put together a great production. Very much worth the time and the credit.

This book was provided at no cost for a honest and fair review.

One of the funniest books a have read in a long while from audible. It was Great

I listened to this with no expectations it was an okay book I wished Duncan had chosen to be a scholar instead of a priest and most of his issues could have been avoided. but the book had it's up and downs as do most I liked the story but characters were hard to follow and some seem left behind like rastaman.

I was surprised on how good this book was. It was extremely good writing and the story kept you involved and listening. The characters were excellently done by the narrator. the story is an epic in the making.

Fantastic World in both Space and Fantasy!

This book was trippy! First, it starts out with a battle of AIs against Humans on a spaceship, then it leaves off with only one survivor on half of a ship and he has to survive on his own, then someone else shows up, and just when you think this book is all out full Sci-Fi, they land on a planet full of Medieval people and have to adapt into the society. Also, talking cats, or--well, the main character can talk to a Jamaican cat. And yes, it's as neat as it sounds. I really enjoyed this long book, though it ends in a big cliffhanger! However, I'm totally excited to check out the next one.
Narration was great!

Such a cool story, so intricate and such a wild ride thus far! I look forward to listening to the next book when I can!