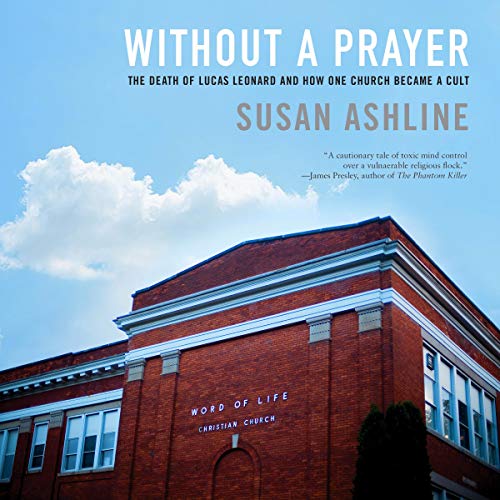 By: Susan Ashline
Narrated by: Hillary Huber
Try for £0.00

Teenager Lucas Leonard made shocking admissions in front of the altar - he'd practiced witchcraft, conspired to murder his parents, and committed unspeakable crimes. The confessions earned him a brutal beating by a gang of angry church members, including his parents and sister. Lucas was brought to the hospital dead, awakening the sleepy community of Chadwicks, New York, to the horror that had been lurking next door. Nine members of Lucas' church would eventually find themselves facing murder-related charges. But how did they get to that point? And what made Lucas confess? The full story has never been told - until now.

Emmy-nominated journalist Susan Ashline delves deep into the Leonard family history, the darkness within the Word of Life Christian Church, and what led Lucas, his family, and his community to that fateful night.

What listeners say about Without a Prayer

The Depravity of the Human Soul

This book tells a chilling horror story of the all too familiar cult murder genre. As often as we hear about these events and think or say "What was wrong with these people?" Why didn't they just leave? This time I was given the opportunity to see why this happens so often. These people were the products of domestic abuse, neglect, and despair. It stands to reason that they would pass those behaviors on to their children and their children's children. I liked this but it gave me pause on occasion to wonder how much damage we are capable of as humans. Was there redemption for anyone? Aha, No Spoilers from me.

This reads a little like a text book. It didn't grab my attention and I couldn't finish it. I didn't even get half way through.