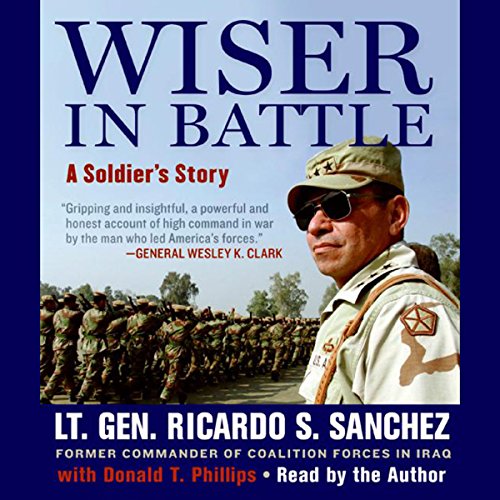 Wiser in Battle is the first book about the war in Iraq by an on-site commander. Former Lieutenant General Ricardo Sanchez served as commander of Coalition Ground Forces from June 2003 to June 2004. Wiser in Battle offers the full story of his tenure, providing a first-hand account of Saddam Hussein's capture, the battle of Fallujah, and the never-ending quest to take out Shiite cleric Muqtada al-Sadr.

General Sanchez was also the senior military commander in Iraq when the prisoner abuses at Abu Ghraib occurred, and when they were exposed to the world. In Wiser in Battle, he chronicles the full inside story of the scandal, including what really happened, the circumstances that led to the abuses, who perpetrated them, and what the formal investigations revealed.

In addition, Sanchez shows how the Bush Administration led America into a strategic blunder of historic proportions. He details the cynical use of the Iraq war for political gain in Washington and shows how the pressure of a round-the-clock news cycle drove and distorted critical decisions.

At the same time, Wiser in Battle is a personal story about the rise to power of the former highest ranking Hispanic in the U.S. Army. From his poverty-stricken youth on the Texas banks of the Rio Grande River and joining the Reserve Officer's Training Corps at 16 to pay his way through college to service in Vietnam, Kosovo, and most recently, Iraq, Lieutenant General Sanchez tells an essential story that explains the meaning and role of the U.S. military in the new century. Wiser in Battle provides an insider's view into what we've done wrong and what we've done right, as well as "A New Doctine" for the future of the country.

"Gripping and insightful, a powerful and honest account of high command in war by the man who led America's forces." (General Wesley K. Clark)

What listeners say about Wiser in Battle

Eye-opening overview of the first missteps in Iraq

Add this book to the ones that you read to educate yourself on the Iraq War. Sanchez had the birds-eye view of what was going on and which players did what. His analysis of Bremer appears to be, from what has been made available, right on the mark. The good thing about this book is that Sanchez doesn't lay blame -- although that ends up happening. He just tells the facts. He also doesn't whine, which some coming out of this situation are prone to do.
I was a little hesitant that he did his own narration, but Sanchez ends up being engaging in a home-town humble way. He is certainly not theatrical though, so if you are looking to stay awake on a long drive avoid this one unless military history really makes your blood boil.
All in all, a well though out book from an expert.

A good man given mission impossible

I worked for LTG Sanchez in Baghdad. Don't agree with some of his politics, but have tremendous respect for his extraordinary efforts in an impossible situation. Sanchez's reading of his book helps one understand what really went on in Iraq during 2003 and 2004.