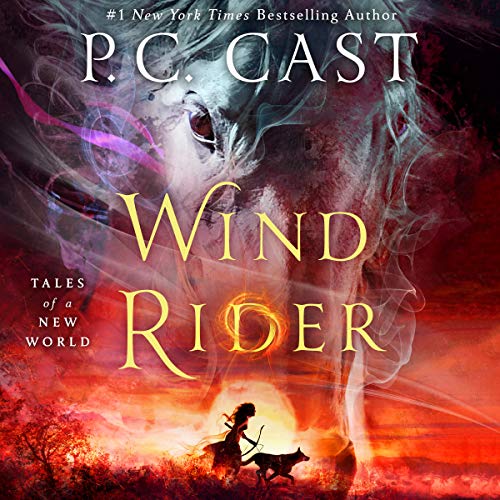 Number-one New York Times best-selling author of the House of Night series, P.C. Cast, brings us Wind Rider, an epic fantasy set in a world where humans, their animal allies, and the earth itself has been drastically changed. A world filled with beauty and danger and cruelty....

Mari, Nik, and their newly formed Pack are being hunted. Thaddeus and the God of Death will stop at nothing until they are obliterated from the earth. But Mari and Nik have one goal: to reach the plains of the Wind Riders, in order to band together to stop Thaddeus from destroying all that Mari and Nik hold dear.

But will the mysterious Wind Riders accept the Pack, or will Mari and Nik and their people be rejected by the mighty Riders and be forced to flee for their lives? And what happens when a rogue Lead Stallion gets too close to the Pack, rejecting all Wind Riders and turning to a stranger for companionship instead?

In the next installment of the Tales of a New World series, love and goodness are put to the ultimate test. Will the Wind Riders and the Pack be strong enough to withstand the God of Death? Will the Great Goddess of Life awaken to join the battle, and if so, will it be as Death's consort, or will the Goddess stand with Mari and her people against the great love of her eternal life?

What listeners say about Wind Rider

loved the changing of voice of each character. and as always PC Fast had out done her self with the writting

disappointment in the author

the world that p.c.cast takes you in is magical and I was so excited for this book.
YET SHE HAD TO GO ALL SOCIAL JUSTICE WORRIOR like really? matriarch, patriarchal, race blah blah blah come on you could of kept that out of the damn book it ruined it for me. IT WASNT NEEDED.

Phenomenal! I love this series!

this was amazing! the narrator does fantastic, just as she does with the other books! love the series so much! cant wait for the next book!

BEWARE! Death is close at their heels!

The Pack is all about love, acceptance and peace but BEWARE! Death is close at their heels!

In this 3rd installment of Tales of a New World the Pack is traveling to the plains of the Wind Riders. Their journey is fraught with danger as they travel through new lands, meet new communities, and race from Death. Each day brings them closer together, strengthens them and carries them closer to their goals.

Death is planning to follow and where he goes, so does destruction, decay, monsters and the deaths of so many and so much. There is a strength in Death's camp that he is not aware of and it is rising to the occasion, collecting information and building an arsenal of her own in the hopes that she may come up with a plan to send Death back to his slumber.

Join in on this heart racing excursion and leap in to a book that teaches true love, acceptance and the strength of the Pack!

I loved the story so much. Such beautiful imagery. The narrator is just wonderful! Can't wait for the next book!

I love all of P.C. Cast's books and Caitlin did a wonderful job performing it.

if this is the last book in the series where's the rest of the story?? there were characters who's fate we still don't know, there's a whole angry mob of dead and diseased people following the main characters.....PC Cast has never dissapointed me before so I really hope there's more coming this was ridiculous.

I loved the whole story!!! It kept me captivated throughout all 27 chapters! Anyone who likes the House of Night books should listen to this book! It’s not about vampires, it is different but incredibly awesome!

Great book! my favorite so far.

This was my favorite in the series. i can't wait until the next book comes out. the connection i feel with the characters and their companions is amazing. i find myself rejoicing when a pup chooses and filled with emotion when danger is near. i love the narrator as well. great job.

excellent job as usual PC cast. I love this series as much as HON and the goddess series

Thank you for the amazing books!
I cannot wait for more. I will say that getting the right person to voice the characters is crucial... but not often is it as well done as with these books. Please keep the team work and adventures coming! Much love and light.