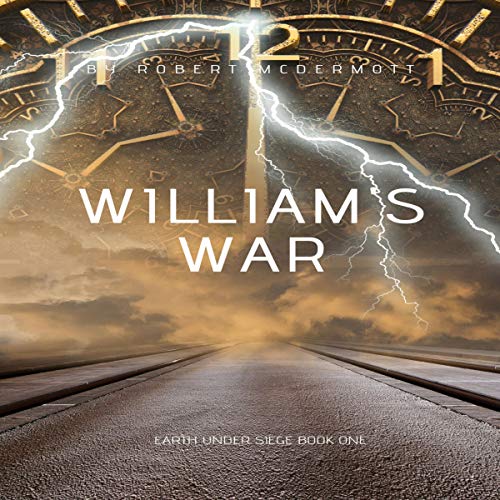 When William gets thrown 500 years into the future, humanity is on its knees in a war for survival. The same gene that sent William to the future brings him other benefits. As his body develops special powers he meets Sara, the resistance's best warrior.

Sara is the only other person to have shown these powers and has become formidable in their use.

Can Will develop a friendship with Sara and between the two of them do they stand a chance against earth's invaders?

What listeners say about William's War

Pain subsides after scars are healed

A fourteen years old boy, afraid of the dark and his vivid nightmares, sales to find himself in a futuristic world in the body of a twenty tours years old man and endowed with super powers - though not knowing what they were or how to activate them. He and a young woman named Sara, who also has special abilities, are the best hope of that earth's humanity in the fight for survival. But even working together, will their combined powers be enough?

A nice concept for a series obviously aimed at younger readers, but with a lost opportunity to make it really interesting by giving more character to the main protagonist. This reader felt little (if any) empathy with William and so the entire novella felt two dimensional, at best, without any investment of caring in what happened to him or the girl, Sara. A great pity as the ideas in themselves were good and the ending obviously promises more adventures in the future. The narration by Tony Bozeman was delivered briskly, well read but again emphasising that two dimensional feeling so that I found my concentration drifting away and had to make an effort to return to the story.

I was fortunate in being freely gifted a complimentary copy of William's War, by the rights holder, at my request via Audiobook Boom. Thank you. It is not a book which I would recommend to most readers, even big S.F.fans, although I do feel there is a lot of potential here and that it could well appeal to young adults and older children more interested in the adventures than the people themselves. It is a young superhero story, more cartoon than three dimensional realism.

A fast paced story set in a possible future world; our hero discovers special powers with which he and a sometimes irritating fellow warrior defeat the invaders.

Loved the performer and the book. Loved the accents. Can’t wait for part 2 to come out.

Great story and narration. Time is like a stream put a rock in the flow of it, and all it does is flow around it. A boy's imagination is no different. Will's war is set in a dystopian future where we're at war with an alien species. Good vs. Evil. And a young boy is thrust in the middle of it. Packed full of action and science fiction, this one is a must read!

I can't wait for Book 2, it can only get better. Slow starting getting the story going. Needed to listen a third time, I needed to really pay attention better! Fast finish left to reader wanting more. It seems to have great potential!

Good start for a new series. It’s definitely has a lot of potential. Can’t wait to see where the kids/adults go next!
I hope all the installments aren’t so short.
Definitely good for teens and young adults.
Narration was great but I don’t understand why the narrator did a Scottish accent but not an Irish or English one.
I was given this free review copy audiobook at my request and have voluntarily left this review

I had a little trouble connecting to the characters in this story, and even the story itself. I listened twice, and found myself drifting away in other thoughts, it did not keep me interested. Not to say it was bad, it wasn't. It's just that a lot seemed to happen in a short span and left a cliffhanger. The book it too short. Whatever part 2 is going to be, McDermott should have waited and made it one book. Perhaps if the second book was already out and I could have listened to both parts it would be different.

I may listen to part 2 when it's available to see where this goes. Narration was fine.

Loved this audio! The way the story was written of time traveling in William's own body as a boy into his adult body in the future was great! Having to train how to fight and learning about his powers that will help with the war going on in the future is very cool! I enjoyed it so much and got distracted forgetting I was at work listening to it!! Oops! LOL The narration by Tory was well done also! Looking forward to listening to the next book!!

Interesting premise but missing something

This is the first book I’ve read/listened to by this author. I did not find I got invested in the characters or found the storyline overly compelling. Regardless, I’m intrigued and curious where the story is headed. The book ends with a cliffhanger and obvious lead into the next book.
William is a 14 year old boy and he finds he’s transported into the future and is in an adult’s body. He also has gained special abilities. He learns he’s fallen into a battle- the resistance vs the Humans. Except in this story Humans are giant Greek god-like beings who seeded the planets with genetically designed creatures (people like us) made in the Human’s image. He meets Sara, she’s in the resistance and also has a special ability.

This is the first book I’ve listened to by this narrator ( Tory Bozeman ). He uses the same cadence to most characters. He makes use of accents. The emphasis he placed made me still realize I was being read to, but it was not uncomfortable.

There are no explicit sex scenes, excessive violence. There is some swearing. There is a pulsing sound in the background that becomes very loud during chapter changes.


I was given this free review copy audiobook at my request and voluntarily left this unbiased review.
Please feel free to comment on whether you found my re view helpful.

I didn't really connect with this story.William dreams,there are clones and abuse.I was lost.Tony Bozemans narration was good. I was given this free review copy audiobook at my request and have voluntarily left this review.'

Enjoyable read, I look forward to the sequel

William's War, my second read/listen from author Robert McDermott. I don't restrict myself to a particular genre. I'm a sucker for anything with memorable characters! Narrator Tory Bozeman’s matter of fact narration added to the book’s enjoyment. I'm not a real science fiction reader but really enjoyed this short read. I was given an Audible copy of this book & am voluntarily reviewing it. I look forward to the sequel. (RIP Marley January 20, 2014 - July 24, 2018).

Definitely pulls you in from the start.

Definitely pulls you in from the start. I was thinking, oh Twilight Zone but was surprised by where the story went. Pleasantly surprised! An intriguing story but I was disappointed by the unnecessary anti-religious comments. Believing you have a soul does not automatically translate to religion. But overall, I enjoyed the story and hope to read more from this author.

This book is really good. Everything happens so fast in the beginning that it keeps the reader on the edge. It is a good short story which is fast-paced and makes for an interesting read. The climax gives an indication to what may happen next opening a wide range of possibilities for what's gonna happen.