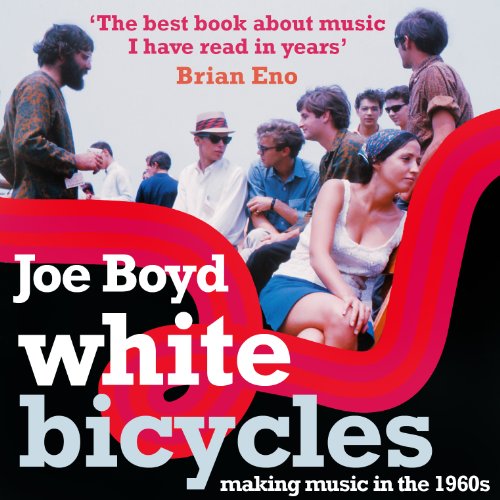 Joe Boyd tells of his journey through Sixties music, from tour managing Muddy Waters and Coleman Hawkins, to plugging in Bob Dylan's electric guitar while working as production manager at the 1965 Newport Folk Festival, to becoming a leading record producer. His first session was Eric Clapton and Steve Winwood's "Crossroads" followed by Pink Floyd, Nick Drake, the Incredible String Band, Fairport Convention, Sandy Denny and many more. He moved to Hollywood at the end of the decade where he produced the documentary "Jimi Hendrix" for Warner Brothers.

What listeners say about White Bicycles

This is easily one of the best audiobooks I’ve heard since joining Audible over 5 years ago, made all the more delightful a find as I’ll admit I bought this on impulse.

It deals with author Joe Boyd’s experiences working as club owner, gig promoter, road manager and record producer during the heady days of the 60s, and the many talented and potentially ill-fated people he met along the way. From the early pre-pop days of jazz quartets and endless one-night stands through The Beatles, Woodstock, Altamont and beyond the book never flags and manages to convey the sights, sounds and mood of probably the most important decade in pop music history. And it’s not all name-dropping and tales of expensive parties (although there is some of that of course). Whilst some of the acts Boyd deals with go on to worldwide fame and acclaim (Pink Floyd and Fairport Convention most notably) many more never quite achieved their potential as with The Incredible String Band or, worse, only found fame posthumously as with Nick Drake.

Joe Boyd also narrates his tale brilliantly, and is both engaging and entertaining so that you can feel his excitement at a pending opportunity, his anger when he is being lead a dance by record labels, and his sadness and regret at the many vulnerable souls (Syd Barrett, Sandy Denny, Jimi Hendrix, Nick Drake) who fell along the way. The final chapter is possibly the finest piece I’ve heard on the music business and how it, and life in general, has altered since the heydays of the 60s.

Joe Boyd disproves that oft-quoted saying, as he does remember the 60s, and he WAS there. Highly recommended.

Wow. I knew Boyd's name quite well, as I'd seen it on countless records in my life. Also I have a subscription to MOJO. But I really didn't have a clue that he was involved in so much! You name a major movement in 50s or 60s American or British music, and there's a good chance Boyd had at least a connection to it. In the case of the Newport Folk Festivals, Island Records, the Incredible String Band, Fairport Convention, Nick Drake, the UFO Club - more than just a connection. Much more. If you have any interest in 60s music, give this a listen, as it really is one of the very best books of its kind. And he provides a brilliant analytic summary in the final chapter, of why the brilliance of those times faded, and why modern life - theoretically liberated by increased incomes and leisure time - has led to a non-stop whirligig where little is valued unlike the idealistic 60s.

I've marked the performance down a bit. Boyd has a pleasant but slightly soporific voice, and I think someone like Johnny Depp (who read the first part of Keith Richards' "Life") might have been more lively. He also has the incredibly annoying habit of not leaving a brief pause between chapters - even 2 seconds would be enough. As it is, each new chapter is simply like a new sentence in the previous one.

Well read by the author himself, detailing alot of the well known- and more on the not so well known- artists of the 60's. Not so much the clichéd recycling of a vision passed between people who weren't there, as often seen on film or TV, but a very real insight into the cultural explosion and the approach of recording albums, touring, setting up club nights and being young in the 1960s.

Superb and insightful recollection of one particular period in the sixties by one who was there and remembered. Not just a historical document but a tapestry that places where music is now into context.

I'd love to see this remastered slightly to give a few seconds at the end of each chapter. Seems an oversight that the audio has been cropped to go immediately from the last word of a chapter straight into the next without a breath or pause. Great book regardless of that minor quibble.

Do yourself a favour and buy this book. I've read many books on the 60s but nothing approaching this. Joe Boyd is a fantastic writer and conjures the excitement of the time brilliantly. He would now be one of my fantasy dinner party guests. He seems to have been involved in so many pivotal moments. I'm now going to buy the book for two people I know.

Joe Boyd was at the very centre of some of the most pivotal moments of late 20th century music and the 60s/70s counter-culture. His was an almost what seems scripted journey through the jazz, folk, rock and pop cultures of the sixties and seventies. One of those personalities that seem to be affected by a strange sense of destiny.

He's an erudite, educated intelligent guy but most of all his insights into music and music production are fascinating to me. His, superbly analogue, ear was certainly super tuned in to music that had value, even if that value didn't always translate into the financial kind.

Joe, you got me to finally sit down and properly listen to Nick Drake. Your description of Drake gave him life and the extra dimension to lift him out of the "Q" magazine listen before you die type lists that I willfully ignore.

Joe has a very easy voice to listen to and you fully engage with his narration. My only real problem was the editing. It's crap. Chapters end abruptly, on one occasion in mid sentence and that's not really acceptable given how easy it is to produce an audio book.

All in all though Joe Boyd has produced an essential work of music history that anyone with an interest in music and music history should read before they due ;o)

the most thoughtful memoir you could hope to hear

this book would make an excellent degree course in popular music and/or youth culture. essential reading!

Possibly the best book on music I've ever read

Utterly fascinating book, both funny and moving in places.

Many books on music can be dry and opinionated, however Joe Boyd's reflection on this era through his own experiences and career are heartfelt and genuine without falling victim to glowing nostalgia, for this book also shares insight into the darker parts of the decade.

A must read for any musician, the conclusions drawn in closing chapter are worth the purchase alone.

An inside story of 60's music and counterculture

A thoughtful and interesting account of the music and culture of the 60's. Anyone interested in the music Boyd produced and was involved in will enjoy this very well produced and performed audio book. plenty of anecdotes for the general music fan. overall an enjoyable few hours.

Boyd recounts his experiences in the entertainment business with wit, candor and thoughtfulness. From the early days of Dylan and Pink Floyd to the freewheeling 70s film scene he takes the reader from one era-defining moment to another. What truly sets Boyd’s work apart is his ability to place his work and encounters into the broader stories of a changing Britain and America.

Anyone interested in the development of British Invasion music from its genesis in American Blues and R&B will find this book engrossing. But while it's always a treat to hear a book read in the author's own voice, Joe Boyd's is unfortunately lacking in inflection or emotion. This matters because emotion is exactly what continues to bind tens of thousands of fans to the music of those critical years. This is also the only audio title I have ever listened to which has not even a single second pause between chapters, which is a bit maddening - the listener is given no opportunity to absorb the conclusion of the story they've just heard.

Cultural history by one who created it

Unique inside glimpses from the musical backstage of the blues & jazz legends - and from the intensely creative period 66-73 when all started anew. Winderful portraits of a lot of the girls & guys we have listened to all our lives by a great storyteller & analyst

The author knew a lot of music people, worked with them and around others, but not closely with any that I'm a big fan of. I would have liked it better if he had been with bands I liked better. The story is well written. Narrator is kind of flat.