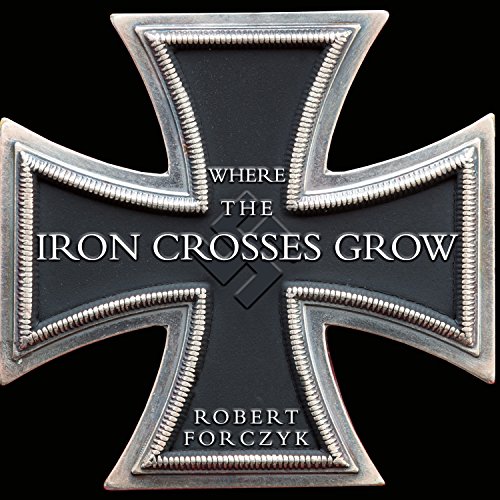 Where the Iron Crosses Grow

By: Robert Forczyk
Narrated by: Michael Prichard
Try for £0.00

From 1941, when the Soviets first created the Sevastopol fortified region, the Crimea was a focal point of the war in the East. German forces under the noted commander Manstein conquered the area in 1941-42, which was followed by two years of brutal colonization and occupation before the Soviet counteroffensive in 1944 destroyed the German 17th Army.

What listeners say about Where the Iron Crosses Grow

should have bought the actual book

This book is a fascinating read full of well researched facts however the robotic style of the narrator seriously detracts from the books merits.


I was occasionally confused by following the ebb and flow of the campaigns.

What I liked best was the excellent pronunciation of Russian and German places, equipment and names. It makes such a difference to enjoyment of an audible book. I speak fluent German and the German was all perfect.

The narration of this book is so bad I could not listen to it. I've come back to it 3 times but it sounds like it's being read by a Robot. An awful performance that's ruined what is probably a good book.

What disappointed you about Where the Iron Crosses Grow?

the lack of feeling

This book is historically correct and extremely detailed.
Every engagement noted with the exact name and number of the units engaged being entered in the text.
Unfortuantely, the incessant repeatition of unit Id's detracts so much from the narrative, it's like reading a table of football scores.
A book for the "train spotters" rather than for those wishing to read about the actions of the decorated soldiers.

Well written and most enjoyable, the narrator really does a excellent job. I will have to read more books by this author.

Extremely in depth and well researched, a good geographical familiarity with Crimea is an absolute must before you start listening

Interesting story but overfilled with too much tech detail about weapons and formations which I think took something away from the storytelling of the events.

Sure h a great and informative piece of work, I found many facts that I had not previously known, and the narrator kept me engaged in the story throughout, highly recommended.

I gave it a shot. I, painfully, listened for a couple of hours.
Its seems forced and monotone. There are so many Infantry Divisions doing this or that.... that I cannot continue to listen.

80% Of the book is like a dump of a detailed event log of the Crimean wars. Hard to get through. Very few stories of what happened on the ground, earning those iron crosses.

This book is for the hardcore military historian who enjoys reading the statistics of a military campaign. It start with interesting overview of the regions history with an enticing nod to what happening there today, but quickly, or too quickly for me, became a monotonous compilation of what battalion was where, how many and what kind of weaponry they had and who commanded them. Mr Pritchard did a fine job in my opinion, but given the material I had to give up on this one.

Exceptional detail. Does an excellent job of putting events in context. Strongly reccomend this to anyone interested in WW2 and/or the Ostfront.

Could have been a great story - But wasnt

Half the book is just numbers and the narrator is horrible, it's like the book had no editor.

The story and the region are great. What should be left out was the spelling out of each and every title, caliber of gun, and affiliation to platoon, company, regiment, or battalion. A nice map as well.

This sounded like a text book. There was almost no sense of the people or there ordeals. Just too dull

Hard to tell, because of the ridiculously horrid narrator. Absolutely pitiful. Painful to listen to. Gonna try to read the book. Don't buy this audiobook.

I liked it. loved the rich history of the Crimea area and how that was woven into the story. only caution is the perspective is taken mostly from post battle reports and is kinda lacking the "human" story. didn't bother me but it is a dry listen for some