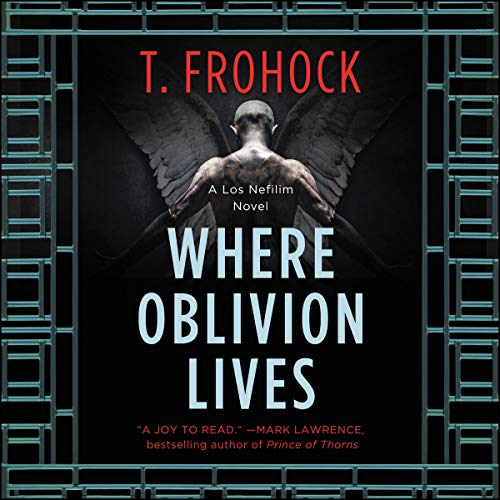 From acclaimed fantasy author T. Frohock comes a dark, lyrical historical thriller, set in 1930s Spain and Germany, that brings to life the world of angels and demons from the novellas collected in Los Nefilim: Spanish Nephilim battling daimons in a supernatural war to save humankind.

Born of daimon and angel, Diago Alvarez is a being unlike all others. The embodiment of dark and light, he has witnessed the good and the horror of this world and those beyond. In the supernatural war between angels and daimons that will determine humankind’s future, Diago has chosen Los Nefilim, the sons and daughters of angels who possess the power to harness music and light.

As the forces of evil gather, Diago must locate the Key, the special chord that will unite the nefilim’s voices, giving them the power to avert the coming civil war between the Republicans and Franco’s Nationalists. Finding the Key will save Spain from plunging into darkness. And for Diago, it will resurrect the anguish caused by a tragedy he experienced in a past life.

But someone - or something - is determined to stop Diago in his quest and will use his history to destroy him and the nefilim. Hearing his stolen Stradivarius played through the night, Diago is tormented by nightmares about his past life. Each incarnation strengthens the ties shared by the nefilim, whether those bonds are of love or hate...or even betrayal.

To retrieve the violin, Diago must journey into enemy territory...and face an old nemesis and a fallen angel bent on revenge.

What listeners say about Where Oblivion Lives

I've been hearing a lot about Where Oblivion Lives this past year and it was one of those books that seemed to be totally up my alley. Angels? Demons? Music? Hell to the yes! I was absolutely on board with that. I, however, did not heed the advice of others and jumped right to Where Oblivion Lives without reading the three Los Nefilim novellas. And though it not necessarily a must to start with the novellas, I feel like it would have given me much more background and worldbuilding I missed at the beginning and which made me struggle to get into the story at first. Eventually I did put the pieces together and got really hooked and I can only blame myself for being stupid.

Anyway, the book. Where Oblivion Lives is set in 1932, Spain, France and Germany. We are between two world wars - not that the characters know about that - and life is more or less peaceful, though memories from the Great War still linger and cause vivid nightmares for those who were there. Like Diago, who lived through the conflict and on top of the memories he also lost his invaluable Stradivarius. Both of which torments his dreams. When they finally learn about it whereabouts, Diago gets a chance to not only get back a piece of himself, but also to prove his loyalty and value to Los Nefilim. Which starts out as a quick and easy job (not without dangers though) turns into a vicious fight for his life.

I'd rather not tell more about the plot, let's just say, there is a twisty road ahead of our dear Diago. What I'd like to talk about however, is my appreciation for Frohock who chose a really interesting era to set her novel in. Exploring brand new imaginary worlds is always fun, but as someone who loves history (did I mention recently, that I have a degree in History?) I always enjoy reading books set in our world, amidst of real events which play an integral part in the world building and occasionally in the plot. In Where Oblivion Lives we have the Sanjurjo trial mentioned several times as well as the Brownshirts or as they also known officially, the SA, a paramilitary organisation in the Nazi Germany. Hitler himself is also mentioned, though his political role was not as prominent yet. I absolutely enjoyed these hints and side comments, "watching" as history happens in the background while the focus still remained on Diago and his quest. Those seemingly unimpotant nuances added a lot to my enjoyment. And, as it was indicated, mortal events influenced those within the Nefilim, so knowing what came in the years after 1932, I can only imagine how much hardship are coming Diago', Miquel's, Guillermo's and the others' way in later books.

Talking about the characters - we have a wide cast here, three of them who have their own POV: Diago, Guillermo and Jordi. Their relationships and conflicts have a long history through a couple of incarnations. Nefilim are the offspring of mortals and angels or daimons which gives them different skills and powers. They don't always remember their previous lives, but they can be triggered and complicate things in the present. Grudges can be hold through the ages as well as love and friendships. Guillermo and Jordi, two brothers have been fighting for the approval of the Thrones to be a leader of one of the Inner Guards on earth. In this life Guillermo is the leader of the Spanish territory and his group is called Los Nefilim. Jordi wants his birthright and stops at nothing to reach his goal. Diago used to be a rouge for centuries, not woving loyalty to anyone, and not be trusted by many for his Daimon inheritance. People who stand by him no matter what are Guillermo - to whom he swore his loyalty - and Miquel, his lover and husband. The one who keeps him grounded and accepts him the way he is. Their relationship has hardships and they still to learn some things, but their connection is strong and honestly, would be nice to have a relationship like the one they have.

I'm not quite sure why, but I couldn't quite connect with any of the characters in a deeper level, even though they were all fleshed out and had their own agenda. Maybe because I was more focused on figuring out what is going on to really pay attention to them - we have Diago's quest, the resurfacing memories of a past life which leads to complications in the present and then the politics within the Nefilim. It probably didn't help that I partly read it as an audiobook - especially the beginning and some parts toward the end. Audiobooks always makes things a bit tricky, and personally I wasn't really into Vikas Adam's performance, he has a nice voice though.

Even though it took me a while to really get into Where Oblivion Lives due to it having many layers and me being new to the world, by the end I was totally invested. I really liked the mystery, how the different plotlines came together and the cleverly placed hints and historical references. For which I need to praise T. Frohock's writing! That and the way she transformed the music into literary form.

If you are looking for an intriguing historical fiction with LGBTQ characters and music in the spotlight, look no further. I'm pretty sure the Los Nefilim series will be up your alley.

After reading Los Nefilim then rereading Where Oblivion Lives, I decided to round my rating up to 5*. I said in my review before that I could not really connect with any of the characters. And at the time of writing the review that was true. Now, however, that I know more about Diago, and have a better understanding of what's going on, I have to correct myself. I definitely can connect with Diago. His longing to be accepted, to prove himself, the struggle to face his past and demons. And Guillermo's endless loyalty to his friends. I can't wait to read the next book.

WHERE OBLIVION LIVES is a well-written, historically grounded, evocative dark urban fantasy. While designated Los Nefilim #4, there being 3 previous novellas, reading the novellas is unnecessary for the full appreciation of this book, though it is likely to spur you to obtain the novellas post-haste.

It is a tale WHERE FAMILY LIVES and thrives—family forged by blood, and family that is hand-picked and formed by voluntary bonds. The central family consists of Diago (half-angel, half-demon), Miquel (a Nefil), and Rafael, Diago's recently discovered son with a prior tryst with an angel. The central family is embraced by another family, that of Guillermo, leader of the Nefilim. Beyond that lies all the Nefilim who have collectively accepted the central family, though not without suspicion, particularly of Diago and his split origin.

This book is WHERE MAGIC LIVES. First, there is the magic employed in the story in the form of music powering special sigils—magic heard, seen and felt. Voice, instruments, anything that produces musical tones can lend strength and force to magical symbols. Second, there is the magic of T. Frohock's lyrical prose, painting a canvas of emotions. There is a palpable sense of underlying danger. The language, tone and turn of phrase Frohock adopts lend themselves to instinctively feeling fear for Diago, Miquel, Guillermo—in the manner one fears for loved ones. Almost from the outset—especially if you've read the novellas—the reader feels connected, relates to, and sympathizes with, the characters, fears for them, hopes against hope for their survival.

The backdrop is WHERE HISTORY LIVES. We revisit history in this tale grounded in 1932 Spain and Germany during the rise of nationalism, where the seeds of World War II were sown. To this increasing political turmoil, Frohock adds a supernatural battle between nefilim—marshals of angels, near immortal, with the power of reincarnation—and daimons. The historical aspect is obviously well-researched, the fantasy addition is highly imaginative, and they are seamlessly interwoven.

The quest for The Key that unlocks the secret to unifying and harmonizing the Nefilim's collective voice is WHERE THE FUTURE LIVES. The world is in jeopardy and powerful as a nefil may be, no single voice alone is powerful enough to avert disaster. Diago has caught snippets of The Key but must unravel his past to unlock it in its entirety.

T. Frohock reminds us WHERE HOPE LIVES--ensconced in the unwavering resolve to do the ought. Attempts may fail; attempts will fail. But re-orienting all attempts to this most righteous and noble of intents is the rudder without which only failure is guaranteed. Loved ones are the constant-- always celebratory in success, reassuring in failure, comforting in despair, and forgiving before offense is even committed. Failure remains a possibility but a risk worth taking.

Where mistakes and failure may be found is also WHERE REDEMPTION LIVES. With the power of reincarnation comes past lives and the regrets that attend them. Diago, Guillermo, and the others are haunted by ghosts of their pasts and the reverberating consequences of prior choices and decisions throughout time. Old enemies join forces with new ones to create greater peril. To maneuver through all this, Diago & Co. must work through the imperfections of memory, the disconnect between actual events and one's hazy, tenuous, incomplete recall of them. In order to prevail, they must come to terms with their past and exorcise old demons. The most dangerous enemy each of the characters must face may just be themselves.

A world where people of seemingly disparate origins and backgrounds are able to get past differences and overcome bias and suspicion is WHERE LOVE LIVES. Some may talk of purity of race, define family in the most narrow of ways, appoint themselves protector of virtue but, ultimately, the only pure thing is love that is persistent, gratuitous, unconditional, enduring.