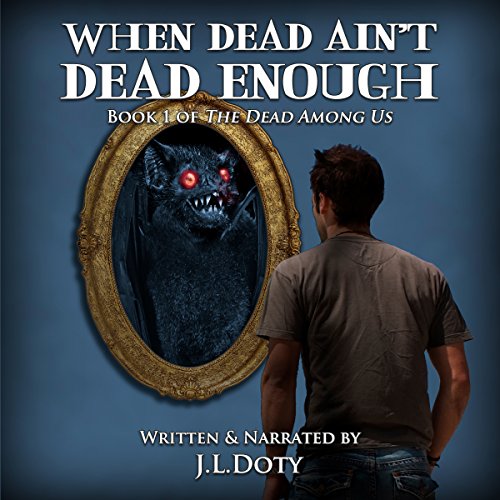 Paul Conklin is a rather ordinary, 30-ish fellow, sharing his ordinary, present-day San Francisco apartment with the ghosts of his dead wife and daughter. Suzanna's cooking for him again, and Cloe's bouncing around the apartment in her school uniform, and things are almost back to normal.

But a piece of Paul realizes he's really bug-f--k nuts, or at least that's what he thinks. He has no idea that a Primus caste demon from the Netherworld covets his soul, and that he's going to have to take a crash course in killing big, bad hoodoo demons, or lose his soul for all eternity.

What listeners say about When Dead Ain't Dead Enough

Can’t wait to read the rest of the trilogy!

I really enjoyed the story; some of it felt a little cliched, but there was enough twisting and intrigue to make up for it and I’m hooked enough to read the rest of the trilogy by the end.
The narrator did a decent job with the character voices, but I found the general narration a little stilted and robotic. I may have enjoyed the narration more if I hadn’t just listened to seven books back to back from a professional actor/narrator, so maybe I’m expecting a little much!
Definitely worth a credit!
‘This review copy audiobook was provided by the author/narrator/publisher free of charge via Audiobook Boom.’

Ever see that great big chase scene in Bullitt? It doesn't have crap on this book. The main character is beset by wizards, demons, and few other fellows who want him dead; he manages to haul arse and get outta town in the nick of time, but the book never (and I mean NEVER) slows down to allow you or the main character to catch your breaths. This book is action packed, full of fun, and you won't see the end coming.

Furlong pulls double duty, as both the writer and the narrator, and he does an amazing job. He has a bag full of voices that he draws upon effortlessly. You always know who is speaking, and can do so without the writing prompts of he said she said.

This book has a followup, and I, for one, cannot wait to see what happens next! Get this book, it is scary, exciting, full of action, and original. When Dead Ain't Dead Enough: The Dead Among Us.

Hooked from the beginning!

After Paul Conklin loses his wife and daughter in an accident, he sinks into a severe depression and stops taking care of himself. He barely eats and is fired from his job. Just at his lowest point, his wife Suzanna appears in the kitchen to cook him dinner, just as she did before she died. And his daughter Cloe runs into the room to greet him with her usual happy smile.

Paul knows that they're dead, but he allows himself to wallow in the hallucinations every night. He's unable to touch his family, but their mere presence comforts him. But then the daily visits attract the attention of an old wizard and his colleagues. The old wizard mistakes Paul for a rogue wizard, but Paul soon shows he might be something more.

Paul is set against the beings from all three realms, realms that he had no idea even existed. The Nether realm populated by demons, the Mortal realm with magic practitioners, and the Faerie realm, ruled by the summer queen and the winter king. The faeries detect the disturbance on the mortal plane. And the demons scent the tastiest of meals.

This book was fast paced and action packed, it had me hooked from the beginning! The point of view shifted between all the characters as the action happened which kept things moving. The writing was descriptive and so well drawn I could imagine everything as it happened.

The characters were all distinct and interesting. Even though the story started after Paul's family had appeared and we weren't shown the lowest points of his depression, I still felt the full extent of his pain. I loved that Katherine was such a fiery and fierce woman who had to take on the role of protector. Colleen was the most fascinating of the group, I hope there's room for more of the mysterious Celtic woman in the sequels. And Jim and Boo were just hilarious and had me snort laughing every time they appeared!

The author narrated his book himself, and I was really impressed by his narration. He had a wide range of voices and performed several different accents, as well as a distinct voice for each character. It fully immersed me in the story, and really added to the experience. I requested a copy of the audiobook, and I'm voluntarily leaving a review.

It took me a few times to get thru this book.It was good.Paul lost his wfe and adughte within a few months.Thrie ghosts still live with him,though.He sees monsters in his mirror.He lost his job,but is hoping to find a new one.Life goes on,at least he knows what is real and what isn't,or does he?He has no idea what he is in for or who he really is.J.L.Doty narrated nicely.“I was voluntarily provided this free review copy audiobook by the author, narrator, or publisher.”

What did you love best about When Dead Ain't Dead Enough?

I love the psychosis of it all! Ghosts making breakfast! Sweet! Creatures from beyond! Even better! I loved it all!

Have you listened to any of J. L. Doty’s other performances before? How does this one compare?

This is my first one.

From beginning to end.

This book was not what I expected and took me a little to get into it. Once I did I became enthralled and now I am going to have to buy the next book in the series. It is that good. It could use a little more show me instead of tell me but overall the story is engaging.

Excellently done. The story and narration drag you right in. I cannot wait to read the next book in the series.

I liked the book from the start. It had a good story and was developing nicely. Then all of a sudden there were a ton of paranormal characters. Vampires, leprechauns, demons, ghosts, wizards, witches, rogues and so many more. It was had to keep track of and the narrator tried to use different voices for each but just didn't hit the mark. At best he sounded like a bad impression of a Muppet. When I found that I was forcing myself to listen to the book, I had to stop. I just can't. Too much going on and confusing. The city, the underworld, the overlord, the under lord....come on already. I think it really had potential, but fell short for me.

I really enjoyed this book, at first it was hard to follow, so many characters to learn in a short time, but it got easier. I really enjoyed the book and story. it's right up my alley, magic, supernatural, etc.
the narration was also good, not perfect, but enjoyable.
I would recommend this book and would love to get more in the series.