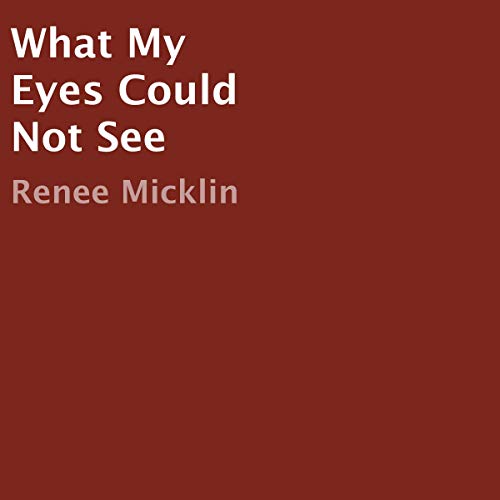 What My Eyes Could Not See

What My Eyes Could Not See is a memoir.

Renee Micklin’s vision was declining from an inherited disorder, but she was totally blindsided by the sheriff’s charisma. Romance seemed unlikely when she met Cooper. However, he was a man of formidable flirtatious charm, and she found herself falling in love. Life became a perpetual adrenaline rush with high-speed motorcycle rides, criminals on drugs, and snitches living on the edge. She felt totally protected by her lawman.

Their relationship was long nights of conversations and lovemaking. From the beginning he led her gracefully through public places, helping to conceal the awkwardness that is an unavoidable aspect of being sight-impaired. Tenderly he took her hand and gently led her outside to see the first crocus peek its head through the snow. On the flip side, he was Mr. Hyde threatening to abandon her on country roads when she displeased him.

He demanded expensive gifts - guns, a Rolex and a motorcycle - while gifting her with mums from the grocery store. His overriding passion was land, lots of land with her money. After a brief courtship they began living together at his farm. When she moved from suburbia to Green Acres, he introduced her to the beauty of rural life - riding his horse double, enveloped in the warmth of a wood-burning stove and tranquility of the country.

What should have been a fairy tale wedding quickly turned to chaos. She did not let this first hint of thorns among the roses dampen her expectations of a happy future with the top cop. A woman progressively blind since childhood can miss the jail being thrown up around her. First to go were family and lifelong friends who stumbled over the sheriff’s unwelcome mat long before she realized it was there.

Pressure to spend her assets increased. When an abuser controls family, friends, and money, he’s got it all. Her husband found his dream land, which he expected her to purchase. It was full of clods, stones, and stubble - not even a thistle in sight. With help from a higher power, her no came from that place where self-esteem and self-preservation had retreated. His response: “Get out! This is not your home any longer.”

What My Eyes Could Not See is unique in its niche. For a blind woman to engage in a war of wits with her predatory husband is the drama that sets it apart.

What listeners say about What My Eyes Could Not See