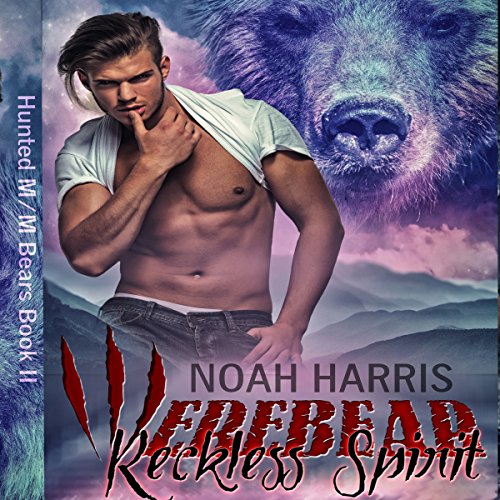 His breath came in short gasps. His lungs burned. The cuts on his face and arms from shoving through the underbrush stung. His limbs protested. He wasn't used to this. Adrenaline and fear were the only things pushing his body onward.

Ori always believed there had to be more to life than the boundaries of his village. There was only one problem: omegas were not allowed to leave. Ever. Willing to risk everything to find something more than life as a breeder, he runs. His path inevitably crosses that of a handsome, charming, red-haired wandering alpha simply called Siv. The two make an unlikely pair and surprisingly good traveling companions. For once in his life, Ori finds himself happy, and in that happiness, he finds he might just trust this mysterious stranger. And Ori has a tendency to follow his instincts. For better or for worse.

Very enjoyable would recommend to others

If you could sum up Werebear: Reckless Spirit in three words, what would they be?

What other book might you compare Werebear: Reckless Spirit to, and why?

To many to mention, the whole book ticked my boxes, I love mm shifter books.

If you enjoy a good shifter story, with Mains characters are mm romance based this is for you. Glad I brought it.

This isn't actually a second book in the series.
It is a rewrite of the hot mess that is "Werebear: Trace: Hunted MM Bears, Book 1".

The Only reason I even gave this a chance is because the new narrator, Craig Beck, did such an EXCELLENT job w/ Indra Vaughn's M/M romance "Patchwork Paradise".

The basic story is still the same, but it has been expanded and most of the plot holes mended. There are still some issues w/ mating heat/pregnancy, but the story flows now. The characters and their world are much better developed. The improved narration helps as well.

This is a HUGE improvement over Werebear: Trace & a sweet little story now

This is a M/F Story in Disguise

I loved "Lust in the Caribbean" and any story narrated by Craig Beck is worth a try. My bad. I'm always perplexed by authors who right a "M/M" story with one of the main characters clearly female in every way except name, even worse when the "male" becomes pregnant. I don't get the shifter M/M/preg. genre. This story reads like an old Harlequin romance. Ori is the damsel in distress rescued by prince Siv. Ori, when not in "heat", enjoys knitting....
Such a disappointment after "Lust in the Caribbean".

Really good book. The narator did a great job.
the story of Siv and Eri . Eri is the omega who runs from the omega houses. Siv is a traveller who help Eri when he's in trouble. They start a adventure togheter. problems arrises.
Great story.

I enjoyed this story of a runaway Omega's journey of trust. The characters were intriguing and sincere. Noah Harris gives hope a fighting chance. Craig Beck give the story life.⚘⚘⚘

characters needed more development but it was enough to be an enjoyable quick read. it's one of my go to's when I just want a feel good slightly humorous quick read.

Awesome book, looks like I have found another great author. I loved the omega he was so feisty. I had a hard time putting the book down. Can't wait to read more of this author's works.

Good book but just an extension of book 1.

If you bought book 1, this book is not for you. you have to start at book 2 to get more of the story.

An alpha-phobic werebear escapes from slavery and meets the first kind and gentlemenly alpha werebear ever in this shifter story written with a happy nod to fairytales.