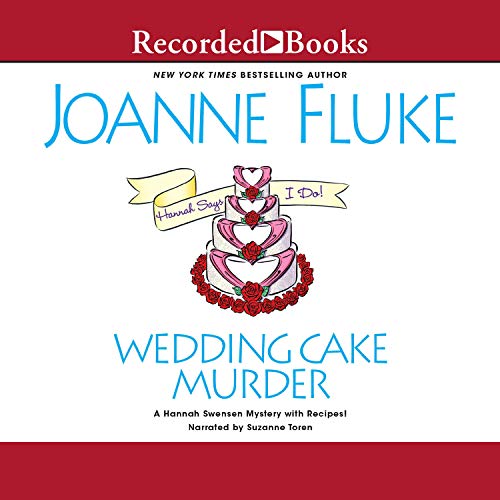 Everyone in Lake Eden, Minnesota, may have had their doubts, but at long last, Hannah Swensen is getting married!

Hannah is thrilled to be marrying Ross Barton, her college crush. And her excitement only grows when she learns he'll be able to join her on her trip to New York City for the Food Channel's dessert chef contest. They get a taste of the Big Apple before Hannah wins the Hometown Challenge and the producers bring all the contestants to Lake Eden to tape the remainder of the show.

It's nerve-wracking enough being judged by Alain Duquesne, a celebrity chef with a nasty reputation. But it's even more chilling to find him stabbed to death in the Lake Eden Inn's walk-in cooler - before he's even had a chance to taste Hannah's Butterscotch Sugar Cookies! Now Hannah has not only lost her advantage, she'll have to solve a mystery with more layers than a five-tiered wedding cake.

not one of the better story lines

the dialogue in this was also pretty weak. more like simple banter back and forth than the usual easy but interesting conversation between Hannah and her family and friends.

After reading these books for more than a decade, I'm sorry to say I'm very disappointed in this twist in the story line.

I've enjoyed this series of books, but the last two have been disappointing. I didn't like the turn that the story line took. I even dozed off during this one.

the story was good I enjoyed the plot

was a good plot but Hannah is always made to look irresponsible when confronting the murderers. you would think by now she would know to take someone with her!

Not the best one of the series by far

I've read all of the books in the series but I really haven't enjoyed the last few. I think Hannah has gotten a little boring and even her marriage to Ross hasn't helped.

Very disappointed with the ending. Still not happy with the whole Ross story. I was hoping he was the killer so he would leave the storyline.

The mystery itself was OK, but the baking competition really made it for me. I loved that story line, it was the part that made me want to return to listening to the story as quickly as I could.

As ever, these books hold their own. Love the series and Hannah's ability to save the day.

Story: While these mysteries can be a little predictable (yet another murder found by the Swenson family... Lake Eden must have the murder rate of Cabot Cove when Jessica Fletcher is in residence), I always enjoy them. It feels like these characters are old friends, and I like seeing what is happening in their lives, and what is a better event than a wedding.

Proformance: Enjoyable to listen to and Suzanne Toren is very skilled.

Joanne Fluke is an great writer

This books is so fun to read and enjoyable how Joanne Fluke writes her books. You keep wanting to read/listen to her books to find out what happens. Hannah finally gets married and the wedding sure is memorable.

What was one of the most memorable moments of Wedding Cake Murder?

I love how she makes it to the wedding, such a memory that everyone in attendance will have for life.

Have you listened to any of Suzanne Toren’s other performances before? How does this one compare?

I have only listened to her as the narrator of Joanne Fluke's Hannah Swensen series but I thoroughly enjoy her work.

Joanne Fluke never fails to have comedy in her books. I laugh so hard at times.

Read/listen to it! You will not regret it!