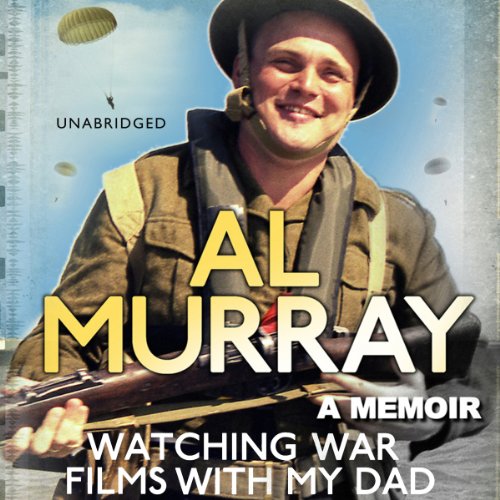 Watching War Films with My Dad

Have you ever watched a film with someone who, at the most dramatic scene, argues that the plane on screen hasn't been invented yet? Or that the tank rumbling towards the hero at the end of the film is the wrong tank altogether? Al Murray is that someone. Try as he might, he can’t help himself.

Growing up in the 1970s, Al, with the help of his dad, became fascinated with the history of World War Two. They didn’t go to football; they went to battlefields. Because like so many of his generation whose childhood was all about Airfix, Action Man and Where Eagles Dare, he grew up in the cultural wake of the Second World War.

Part memoir, part life obsession, this is Al Murray musing on what he knows best. And he’s sure to tell you things about history that you were never taught at school.

What listeners say about Watching War Films with My Dad

Listening to Al Murry with my Dad.

Describing this book as simply a memoir doesn’t do it justice. It is part memoir, part biography, part autobiography, and part history book (with a bit or travel guide near the end). A well written, exceptionally well read and thoughtful work.

A different view of Al Murray

Not quite what I expected. Al took a while to get me comfortable, but I would certainly buy another of his books now.

Excellent voice and delivery - I always prefer books read by the author. The footnotes were excellent and Al's grasp of historical events is very deep. Made more interesting by the fact that we have similar interests in military history, although Ihave to say that his go deeper than mine.

Not heavy, but serious enough with some very funny parts , very well delivered. No big surprise there.

Not entirely what I had in mind

The first half or so is very much the memoir advertised, being written/read by a chap I vastly admire, who is of a similar age to me, so the Airfix and Action Man tales wee delicious. Then we become rather bogged down in Arnhem battles which, while fascinating, should have been in a different book. Not exactly packed with vicarious chuckles. Poignant and moving, yes; funny, no. And I’m afraid funny, or at least heartwarming, was what I was after.

What made the experience of listening to Watching War Films with My Dad the most enjoyable?

Al Murry narrated the work. He brought a lot to his material.

The antidotes. Al Murry made the peice personal in a way more conventional historians never do. I appreciated that. Though at times the history was a little thin when it needed to be fatter. Though he was honest about not being an expert.

Which character – as performed by Al Murray – was your favourite?

It was very funny and I laughed. Plus he got to go up in a spitfire and I was 'well jell'

Exactly what it says on the tin. Good fun.

I do like Al Murray so I may be biased, but I really liked this. The story was more than just Murray family stories, with some proper history in there too. It's not pub landlord, rather, a well considered collection of history and anecdotes and some thought provoking stuff.

Al Murray is a great historian.

Would you listen to Watching War Films with My Dad again? Why?

It is a very human account of boyish fascination with WW2 and a joy to hear.

What was one of the most memorable moments of Watching War Films with My Dad?

His take on Arnhem and Montgomery made me re think my understanding of both, and his account of a double Victoria Cross winner was magic.

Which character – as performed by Al Murray – was your favourite?

Himself as a boy, a son, a young man, a father and an historian was the perfect mix.

A true joy to read.

Really interesting way of learning about the war

Gave some great stories about the war , the techy side was really interesting and I learnt a lot of stuff I didn't know
His pretense to be a jellied eel salt of the earth sort of guy ,rings hollow considering he's a public school boy though :/
Books worth a read

loved it.
lots of fun
definitely worth it
lots of interesting information
thank you Mr Murray

Fantastic account of my childhood as told by the Pub Landlord. So many good memories.

al Murray at his best

brilliant . al Murray at his best. a must have for any collection. 5 star