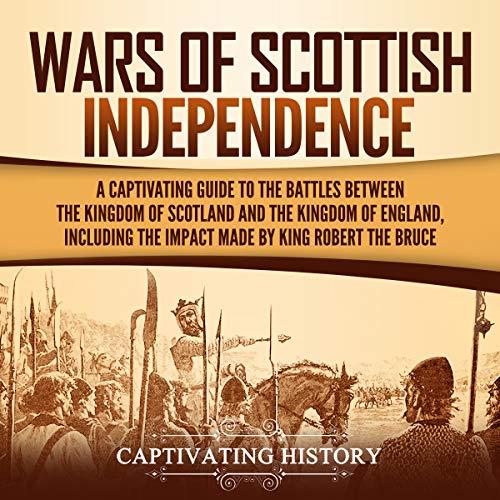 Wars of Scottish Independence: A Captivating Guide to the Battles Between the Kingdom of Scotland and the Kingdom of England, Including the Impact Made by King Robert the Bruce

By: Captivating History
Narrated by: David Patton
Try for £0.00

The borderland between Scotland and England has historically been a site of struggle, violence, and conflict. This was acutely so during the First Scottish War of Independence. The tumult during this medieval period was grand, presenting a historical stage filled with memorable larger-than-life figures such as Edward I, William Wallace, also known as "Braveheart”, and Robert de Bruce.

In this audiobook, you'll discover the revolutionary events that formed both Scottish and English history.

Wars of Scottish Independence: A Captivating Guide to the Battles Between the Kingdom of Scotland and the Kingdom of England, Including the Impact Made by King Robert the Bruce includes topics such as:

Listen to this audiobook now to learn more about the Wars of Scottish Independence!

What listeners say about Wars of Scottish Independence: A Captivating Guide to the Battles Between the Kingdom of Scotland and the Kingdom of England, Including the Impact Made by King Robert the Bruce

I love Scottish history but had to stop listening due to the narrator. You can forgive a non native for mispronouncing the more difficult terms, but i can't listen to someone calling the Hebrides the "heh-brides" or the Lothians the "Lohth-eye-ans". I spent most of my time trying to figure out the narration rather than listen to the story.

This book would have been fantastic had it not been performed by an American who has pronounced every Scottish town, city and most names wrong. Very frustrating to listen to when you are Scottish.

All in all.. this does not make this a bad book, but the pronunciation is to me a large part of scottish dialect.

My first captivating history listen and very impressed with the direct/relevant information produced, however i was constantly distracted my the narrators consistent inability to pronouce scottish towns and cities.

Good historical look at the borders of Scotland

The story then progresses up to the Wars of Scottish Independence's appointment as Guardian of Scotland by Captivating History ..This novel is full of plot twists and suspense that leaves you wanting more! You might think you know William Wallace from the movie BRAVEHEART, but that barely touched the surface of what you'll discover in this book!

Good book, debunks some of the "history" being bandied about in modern movies. Believe it or not, this book shows the real Wars of Scottish Independence weren't ANYTHING like portrayed in the movie 'Braveheart". A must read for anyone who actually has a yen for real Scottish history!

the research methodology the author employs is dubious at best. often relying on blind storytellers to give physical descriptions. Also I can't for the life of me find out who the hell actually wrote this

It is what it says it is.

And it was a great read as well. Took my awhile to get used to the narrator, but as he is reading a textbook, more or less, he did a fine job.

The pace of the information was good, and interesting. In the beginning they give a brief overview of the material, then the go in deep, and afterward give another overall summery, that was very helpful as I was already a bit unfamiliar with the subject material.

I just finished watching Outlaw King, and wanted a bit more background without having to get to deep, and this book was perfect. I listened to it twice in a row.

If you want an understanding of the Anglo-Scottish conflict that is based on strong research and that avoids the subjects myths and cliches, then read this book. Strongly recommended.

Wars of Scottish Independence was excellent.

This is factual information about the leaders of the fight for Scottish independence. I really enjoyed the Captivating History's book to describe the Scottish wars of independence. The book was brief but concise. The author compared it with what we actually know of the people and the events.

I have never listened to an Audibke book with so many mispronunciations in my life. even words like Edinburgh and Plantagenant that should not ne difficult. MacDougal pronounced "doug" as in the name. come on. the accents were terrible. a subject that I love, I couldn't finish it.

Interesting book. Some great insight to some of the wars but didn't touch on some of the battles that are also important in Scotland's history. The performance is ok a little monotone but clear and easy to understand.

First, get your copy as I did & increase your knowledge of a lesser known historical figure! I have a problem with keeping straight the difference between Great Britain & surrounding countries . Maybe someone will write a book about it, know this came later in History . They would be friends & then horrible enemies. And throughout the book would fight then make peace & then fight again.

Very Unique from my side.