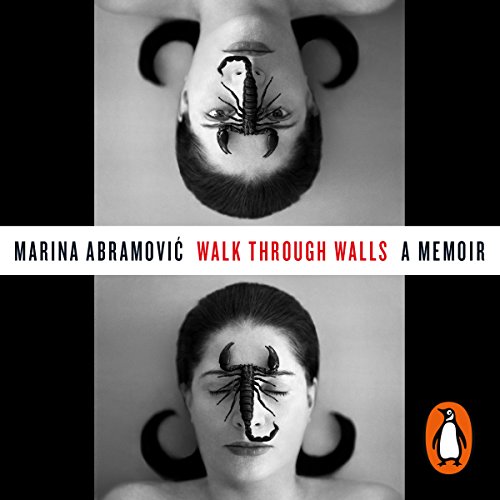 Penguin presents the unabridged downloadable audiobook edition of Walk Through Walls, written and read by Marina Abramovic. This memoir spans Marina Abramovic's five-decade career and tells a life story that is almost as exhilarating and extraordinary as her groundbreaking performance art.

Taking us from her early life in communist ex-Yugoslavia to her time as an a young art student in Belgrade in the 1970s, where she first made her mark with a series of pieces that used the body as a canvas, the audiobook also describes her relationship with the West German performance artist named Ulay who was her lover and sole collaborator for 12 years. Abramovic has collaborated with stars from Lady Gaga to Jay-Z, James Franco and Willem Dafoe and is best known for her recent pieces 'The Artist Is Present' and '512 Hours'.

This audiobook is a fascinating insight into the life of one of the most important artists working today and the woman who has been described as 'the grandmother of performance art'.

What listeners say about Walk Through Walls

This is a woman's story of her life and thoughts and work and I was afraid it would be too heavy- her voice at first feels comically deadpan Slavic- but I utterly fell in love with it and learnt do much about a type of art I had pretty much ignored, through ignorance.
Marina is an amazing info person with so much life and wonderful tales to tell, I really recommend this book, it will open your mind and heart.

Do not hesitate, download now for complete inspiration - incredible stuff from a modern female hero

I was amazed about Marina's Abramovic personality. Great book, very fascinating. I am not art or performance art lover or even being somewhere close, but i loved the book, watched videos, interviews, planning to watch Brazil film on vimeo. Amazing story of real life.

this story was fascinating, very interesting, I liked the description of all the performances. listening to it in Marina's own voice was special. I loved it

The inspirational story of one of the most influential artists of the second part of the 20th century. A must read!

Must read for all sensitive but strong people

Was writing quote after quote. Amazing humour fantastic. Life story so many lessons for both men and women about love life and art and specially art.

What an interesting person and what a life!! I enjoyed her doing the narration herself, it made the memoir so much more real.

A fascinating insight into the mind of Marina and especially moving if you are familiar with her work. Hats of to her for being so open and vulnerable.

Hearing Marina read her life story so far, is just amazing. What a life and what a book.

Thank you Marina Abramovic for another piece of art that I will revisit again and again. Beautifully read incredibly tale from a very special woman

In Top 5 of my favourite books ever!

Couldn't recommend more for those of you interested in art and extraordinary people. Read by Marina herself what is an amazing addition.

The most inspiring book I’ve every read

I will surely come back to listen to Marina’s voice, just to remind myself why art is important and why carry on. I love all the stories, observations, and her love for others, and her work ethics. I’ve learned so much. Like her art, this book has transformational power.

Incredible! Will listen to it more than once

Marina is so inspiring, this book changed my life and perceptions. Thank you Marina for your story and voice.