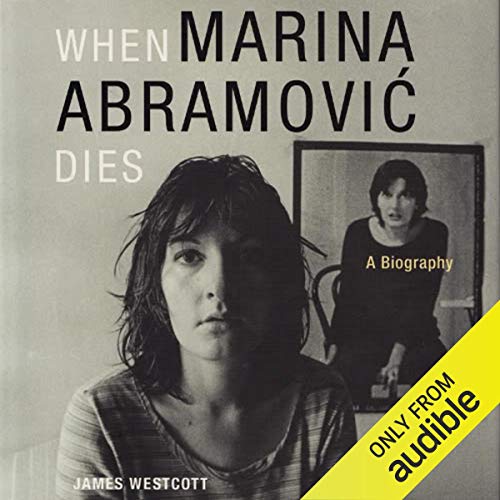 By: James Westcott
Narrated by: Kathleen Gati
Try for £0.00

Marina Abramovic, the legendary performance artist, is legendary for a reason. She has spent four decades making traumatic and transcendent artworks using her own body as a material, breaking through the boundaries of the acceptable in visual art. In the early 1970s alone, she lost consciousness while lying in the center of a burning five-pointed star (symbol of the communism of her native Yugoslavia), took pills to induce hyperactivity and then catatonia, and remained determinedly passive as an audience member pushed a loaded gun to her neck.

When Marina Abramovic Dies examines the extraordinary life and death-defying work of one of contemporary art's most important and pioneering performance artists. It chronicles the artist's formative and until now undocumented years in Yugoslavia and looks closely at Abramovic's partnership with the German artist Ulay - one of the twentieth century's great examples of the fusion of artistic and private life. In their final performance, Abramovic and Ulay walked toward each other from opposite ends of the Great Wall of China until, after ninety days, they met in the middle and said goodbye.

In one of many performances of the renewed solo career that followed, Abramovic famously lived in a New York gallery for twelve days without eating or speaking, nourished only by eye contact with the audience. It was here, in 2002, that author James Westcott first encountered Abramovic, beginning an exceptionally close collaboration of biographer and subject. For When Marina Abramovic Dies, Westcott draws on his personal observations of Abramovic, his unprecedented access to her archive, and hundreds of hours of interviews with the artist and the people closest to her. The result is a unique and vivid portrait of the charismatic self-proclaimed "grandmother of performance art."

What listeners say about When Marina Abramovic Dies

Best of the Year

I am listening to this book for the third time, entirely out of my own fascination and enchantment. If there was a Sleeper category for the Audies, this would win hands down.

James Westcott wrote a contemporary fine art biography that broke every rule, starting with the fact that you can’t put it down. — I’m serious, he’s been criticized among the academic crowd for writing an artist biography that is TOO interesting.

I never would’ve guessed that a starkly visual artist’s narrative would make an outstanding audio script, but Westcott intuitively writes for aural transmission— it you never SAW Abramovic in person, you would still experience her, entirely, in this story. And she is a force of nature.

Narrator, Kathleen Gati; I want to kiss her feet. What a talent. She inhabits a host of radical and conservative Serbian characters, the Soviet establishment, and then the entire European and New York art world. Mind-blowing.

It was hard to imagine how a book this long wouldn’t become dull, but it never once came close to it. This is such an inspiring book that can offer so much insight and entertainment to anyone. This really served as a kickstarter to my own artist/creative productivity.

I loved hearing a more detailed backround of this magnificent artist. What a beautiful soul.