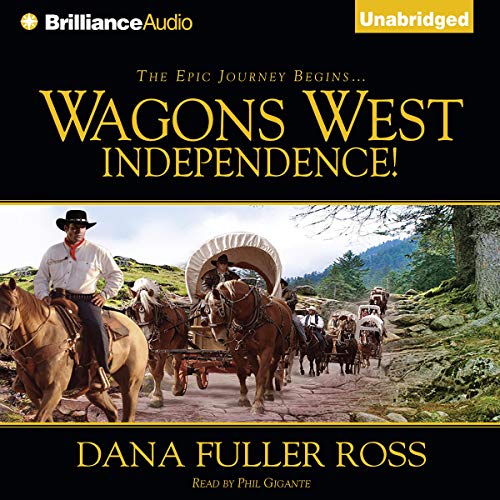 The year is 1837. The American West is untamed, uncivilized, and largely unclaimed. U.S. President Andrew Jackson, in a race with the British and Russians, sends a wagon train of would-be settlers into the uncharted Oregon territory, led by his close friend, mountain man and veteran Sam Brentwood. Teaming up with trail hand Whip Holt, widow Claudia Humphries, and a colorful group of courageous pioneers, Brentwood sets off from New York, heading westward to Independence, Missouri - the last outpost of civilization before the unknown and treacherous dangers of a new frontier. Along the way they will form unbreakable friendships, fight unforeseen enemies, and face unimaginable and often fatal odds. But in spite of the hardships and heartaches, the tragedies and triumphs, they will risk their lives to follow their dreams - and forge a nation's destiny. This is their story.
©1984 Dana Fuller Ross (P)2009 Brilliance Audio, Inc.

United States President Andrew Jackson, and financier and fur trader, John Jacob Astor, are in a race with the British and the Russians to settle and claim the Oregon Territory. Jackson calls upon his close friend, mountain man and rugged veteran Sam Brentwood, to put together a wagon train with the purpose of traveling overland to Oregon and settling the territory. The train of prairie schooners eventually includes over 500 people - folks who were willing to risk their lives to make the first overland trip across America in an entourage of this kind. They were motivated by the gift of 600 acres of free land to homestead in Oregon, and the opportunity to start new lives. The financial situation in the US was terrible during this period. Due to a major depression many of the potential Oregonians had lost their jobs, life savings and/or property.
Brentwood, the wagonmaster, and his assistant Whip Holt, begin the journey in Long Island along with a beautiful, feisty widow, her younger sister, and the sister's elderly husband. The small group pick up more people and covered wagons as they slowly move cross-country to Independence, Missouri. Missouri will be the pioneers' last look at civilization until the Pacific Northwest is reached.

This fictional account of the first wagon train to cross the US is extraordinary. The characters are complex and very well developed. They obviously grow and change throughout the journey of almost three years. The author vividly brings history to life here. And the politics behind the settling of the West are fascinating, as are the descriptions of the land and the Native Americans the group encounters along the way. As one would expect, the novel is filled with tales of adventure, hardship, courage, love, loss, tragedy and triumph.

I've always loved this series and was thrilled when I found the unabridged audio books available. Phil Gigante did an excellent job reading this book and added just the right amount of excitement to his reading. Hoping that Audible will eventually record all the books in the series!

Appreciating Our Ancestors and a good story too.

Hubby and I have been listening to this series of books while traveling in the car and are up to book 3. It's a great way to experience a little about the trials and hardships our ancestors dealt with while heading west. We've enjoyed the story and recommend it.

Awesome story. Caught your imagination and interest early and was narrated very well. I was even able to get my husband to listen to this series with me!!! Couldn't wait to download the next book in the series and am currently listening to the final story Wagons West - Oregon.

INDEPENDENT THINKING WOMEN WERE TROUBLE MAKERS
I liked the book, I didn't love it, but I liked it. It had the makings of a great book. I love tough hard to get along with women and it had that. It had historical facts and I liked that. It had some action. I just could not get excited about it. Maybe I missed the rough talking clichéd cowboys. I much more enjoyed The travels of Levi Zendt in James Michener's Centennial. I just don't think the writing was as good as some other westerns. Sorry, I just can't put a finger on it. James Michener, Dusty Rhodes, Cormac McCarthy, Phillip Meyer and David R. Lewis are better writers.

It’s been years since I read this and I was so glad to find it on audible. Reader does a excellent job

Good story and storyteller! Enjoyed it to the last. Kept me entertained on a long road trip

It's a pretty simple story without any complex plots. No conflict ever takes more than a chapter to sort out, but it's a good story none the less if you have interest in the Oregon Trail.

The narrator is outstanding. His accents are diverse and he is easy to listen to.

A must listen if you are interested in the topic and want an easy book to listen to.

Loved it. Looking forward to the next one in the series. Great story and plot.