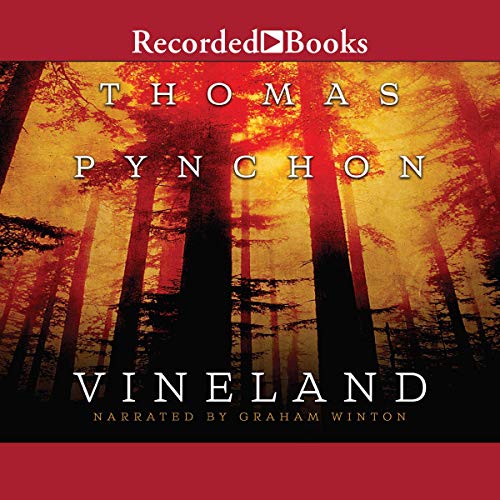 By: Thomas Pynchon
Narrated by: Graham Winton
Try for £0.00

Vineland, a zone of blessed anarchy in Northern California, is the last refuge of hippiedom, a culture devastated by the sobriety epidemic, Reaganomics, and the Tube. Here, in an Orwellian 1984, Zoyd Wheeler and his daughter, Prairie, search for Prairie's long-lost mother, a '60s radical who ran off with a narc.

What listeners say about Vineland

..everybody's a hero at least once...

"...everybody's a hero at least once, maybe your chance hasn't come up yet."
- Thomas Pynchon, Vineland

I first read Vineland about 25+ years. It was my sophomore year in college. I was idealistic and I met this guy in the college bookstore named Thomas Pynchon. Since it was my FIRST (or was The Crying of Lot 49 my first?) Pynchon, I think I missed way more than I gained (except for the desire for MORE Pynchon). Looking back now, Pynchon for me starts to divide into his BIG GREAT novels and his funny, shorter novels.

In my brain, Vineland fits with Inherent Vice, Bleeding Edge, V., and The Crying of Lot 49. On the otherside of my Pynchon index card sits Gravity's Rainbow, Mason & Dixon, and Against the Day. Obviously, there are no perfect systems here. But that is how Vineland sits for me. It was VERY good, just not GENIUS Pynchon. The slimmer, more linear, suffer/pot noir stuff seems more likely to be finished and read. But his bigger, Maximalist, juggernauts are waves that if you can catch and ride, will float you to Nirvana. The bigger the Pynchon risk, the better your chance for seeing God (or at least splitting a sub with her).

Vineland basically tells the story of how the hippies of the 60s sold out (in various ways) and moved from rejecting Nixon in the 60s to embracing Reagan in the 80s. Like most of Pynchon's novels, this one is filled to overflow with Pynchon's humor, caricatured characters with absurd names, pop culture, paranoia, and weed. I enjoyed it and if I was going to rank it against most writers it would rank high. But it is on the lower end of the Pynchon heap.

This is, as far as I can tell, middle-period Pynchon, maybe, excepting Mason & Dixon, the only middle-period Pynchon. There’s the late stuff, the fun genre send-ups of Inherent Vice and Bleeding Edge. And there’s the early stuff, V and Gravity’s Rainbow, that developed a new model of fiction and established him as a potential Nobel laureate. I haven’t read a few key ones of those, particularly Gravity’s Rainbow, but I still have a sense of where his career started and ended.

What’s new to me is the degree to which Pynchon seems committed to celebrating the aesthetics of the counter culture. You see traces in the early novels, I suppose, and in the way he famously declined the National Book Award, sending Professor Irwin Corey in his stead. They get amplified in Inherent Vice, where our middle-aged ex-hippie hero takes a turn as a private investigator.

I read Vineland around the time it came out, but I simply wasn’t mature enough to recognize how flat-out funny this is, how relentlessly it plays with the stereotypes and expectations of the late 1960s stereotype. Then, I tried to see it as a sort of sequel to V, as a novel experimenting with post-modern form. Now I see it as what reviewers of the time suggested it was: a slighter version of what Pynchon had been doing in his early novels, a book from a writer who’d seemed to resign his station as great-American-novelist in favor of over-the-top entertainer.

This is entertaining, and it does seem to be exploring the form of what I like to call the rhizomatic novel, but above all it seems to be insisting – in the middle of the Reagan era – that the ideals of the original counter culture weren’t as misplaced as contemporary opinion had it. The political revolutionaries of the time may have been sell-outs, the gurus may have “died” in some form, the rock and rollers may have turned out to be little more than lounge singers with worse haircuts and tackier suits, but something in their aesthetic remains valid.

The more I read, the more I got the sense of Pynchon seeing himself in some perverse way as a kind of “Milton of the Movement,” a true-believer (though in this case a true believer in a kind of studied nonsense rather than in Protestant predestination) who set out to write enduring literature within the aesthetic of the cause.

In other words, I think that’s what Pynchon’s middle career means – an abandonment of his early literary ambition but a renewed claim on the legacy of the 1960s rock-and-roll moment. I reserve the right to change that opinion if I ever do read Mason & Dixon or Against the Day, but that’s what stands out to me here: an unironic embrace of Zoyd as the stoner-innocent, a gesture of affection if not quite respect for what must have seemed the wave of tomorrow when he was a young man trying to find his own voice.

It doesn’t bother me that this one is a mess, not when it’s as funny line by line as it is, but I am somewhat bothered by the easy sexism of making Frenesi, the angel of the early movement, a woman who can’t resist the cruel sexuality of a jack-booted government agent. (And, to make things worse, [SPOILER] that her daughter Prairie ends the novel discovering the same shameful impulse.) Zoyd gets to carry the banner of the better-the-world-through-rock-and-dope belief, but the women in his world fall short of that.

So, yeah, this is enormous fun, but it feels dated too. Pynchon was better when he was younger, and I think he was probably less restrained in his later years. Here in his transition, he mostly got it right, but I think he’s also learned something since this as well.

Pynchon is not the easiest writer to get through, but Graham Winton's narration makes experiencing this book a really joyful activity. I hope he does the narration for Pynchon's V and also for BLEEDING EDGE (Ms. Berlin's narration is abysmal.) Come on, Graham, do the rest of the Pynchon books and a redo of BLEEDING EDGE.

You're missing a real treat with this combination of Pynchon and Winton.

In his 1990 review of Vineland, Salman Rushdie called it “free-flowing and light and funny and maybe the most readily accessible piece of writing the old Invisible Man ever came up with”. Refer to its Wikipedia page if you desire a plot summary before wading in. This is Pynchon’s California style in its fullest flowering. If you’re looking for an entry point to his oeuvre, this is an excellent place to start.

Graham Winton’s performance is exemplary. It only suffers by comparison to Ron McLarty’s top-shelf rendition of Inherent Vice, which is Vineland’s younger (and less ambitious) sibling. My main complaint is that Winton’s tempo is, only slighty, too fast. Pynchon is one of the supreme wordsmiths, and the reader wants to linger more over the music built into the sentences. Speaking of music, the songs are satisfactorily rendered; most of the other audio versions of Pynchon’s books have the song lyrics read, not sung, which is a loss. But Winton’s musical performance suffers, again, by comparison to McLarty’s. Nevertheless, I’d be very happy if Winton were to be the reader for V., for which, as yet, there is no audio version. Hint hint.

Audible regularly sends emails notifying me that there’s a new book by “an author I like”. Often these are for authors I’ve purchased a single book by, and didn’t review. I have all the Pynchon books Audible offers, and have written reviews of most of them, yet I received no such notification in this case. I learned this book was available, by chance, four months after its release. Strange.

If you're looking for audio Pynchon then it's a safe bet that you understand the challenges of reading aloud Pynchonean text; the multiple character, flashbacks and flashforwards in mid-sentence, the songs. This reader does it all with panache

Cali was different back then.

I liked Inherent Vice. But the glory of the unemployed drug addled west coast lifestyle has lost its shine. The characters don't ever seem to break out of their stereotypes and the plot is not unique enough to hold interest.
Not worthy of the credit.

Vineland is an insane, rollicking story, like most of Pynchon’s books but if you hang with it, the journey is thoroughly enjoyable. Thomas is the GOAT

a great sequel to crying of lot 49

the narrator reads wonderfully adding a lot of life to the story with different accents and voices.

really not that good

to narrate a pynchon novel, you have to be able to sing the songs. this narrator made me cringe whenever there was a song. this was a really mediocre unremarkable pynchon book...