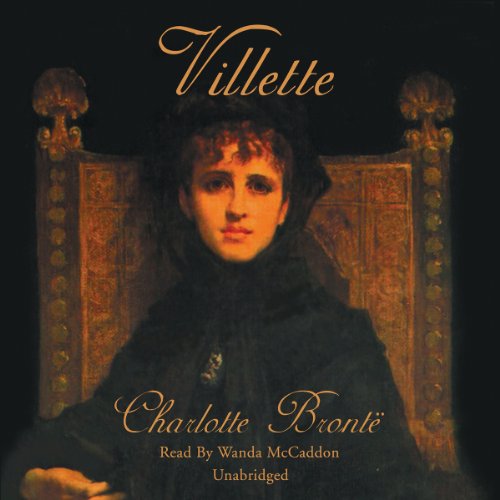 By: Charlotte Brontë
Narrated by: Nadia May
Try for £0.00

Arguably Brontë's most refined and deeply felt work, Villette draws on her profound loneliness following the deaths of her three siblings.

Left by harrowing circumstances to fend for herself in the great capital of a foreign country, Lucy Snowe, the narrator and heroine of Villette, achieves by degrees her independence from both outer necessity and inward grief. Lucy flees from an unhappy past in England to begin a new life as a teacher at a French boarding school in the cosmopolitan capital of Villette. But her struggle for independence is soon overshadowed by her friendship with a worldly English doctor and her feelings for an autocratic schoolmaster. Brontë's strikingly modern heroine must decide if there is any man in her society with whom she can live and still be free.

May convincingly portrays the many moods and complex character of Charlotte Brontë's heroine....Her many voices, with subtle timing, sweep us at a quick clip through a narrative of psychological insight and vividly rendered places, people, and landscapes." ( AudioFile)
" Villette! Villette! Have you read it? It is a still more wonderful book than Jane Eyre. There is something almost preternatural in its power." (George Eliot)
"Brontë's finest novel." (Virginia Woolf)

What listeners say about Villette

This novel brought me to a standstill ... Heartbreaking, thought provoking ..if you enjoy all things Bronte then this is a must..

What would have made Villette better?

Would you ever listen to anything by Charlotte Brontë again?

Yes, because I like some of her other works

So often British performers (at least the inexperienced ones) fall into the trap of letting their voice fall in the same exact way over and over, but Nadia May fluctuated her voice perfectly so that your ear never tired of listening to her voice. Her performance makes you forget that she is reading to you. Her French accent is superb and often throughout the book the passages are in untranslated French. If I were reading on my own this would probably be an issue, but because of the way Nadia reads it I was able to catch the meaning of the language without knowing exactly what was said.

The performance of Nadia May is the biggest redeeming quality. Other than that, this book struck me as one that you really need to analyze to enjoy. Bronte uses a lot of symbolism and if you don't know her background as the author you may not be privileged to fully comprehending what she is getting at in Villette.

This story was insanely boring. It wasn't until a couple chapters in that I realized who the main character was, but for the majority of the book I found myself asking, "Where is this going? Are we even building to anything at all?" Unfortunately the ending wasn't as satisfying as I had hoped it would be.

Forced myself to listen to the first to CDs sooooo boring couldnt stand any more.

What was most disappointing about Charlotte Brontë’s story?

Disappointed i wasted all the time to download and record this book.

the basic story was ok. this book would have been better in an abridged version. I found myself wanting to fast forward the long winded descriptions. I would not get another book from the author becase of this. I also found the main character a bother. 'Just get up and do something instead of sitting there suffering silently' was what I kept thinking.

Only good if you're over analyzing

I want to start off by saying the woman who reads this book is wonderful. However, Villette is one of Charlotte Brontë's lesser known novels for good reason. Most of what is written is irrelevant to the plot and the ending is very unsatisfying. It's definitely not a pleasure read and I only suggest reading it to study the narcissistic tendencies of the main character.

Villette prattles on and on about nothing, but does have an interesting ending. Lucy Snow is supposed to be an independent woman, and she is, at least outwardly. However, her inner life is soulless and clueless. She would rather purport to civility rather than reveal an emotion. Lucy does make strides towards being broadminded, but in the end, at it is a very good ending, we are left wondering her fate. Does he or doesn't he? Bronte gives us no neat ending and that ploy saves the book from being simpering tripe. By the way, I believe he does.