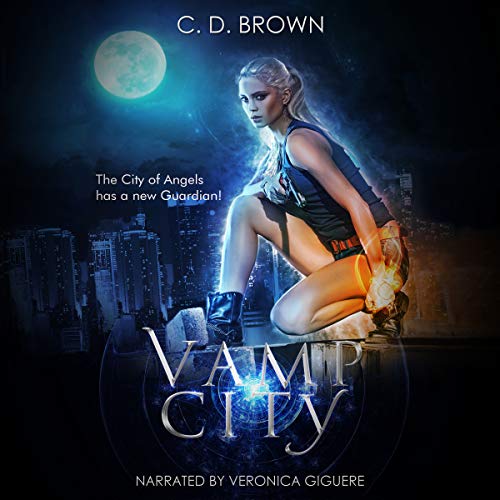 All Sophia Fontanelle wanted was to be left alone. On the run from New Orleans and its vampire council, she heads to Los Angeles to start a new life. But when The Caballero, the ancient peacekeeper rumored to be the great Zorro himself, is murdered, Sophia finds herself caught up in a fight to clear her name. Threatened by a 1950s-era gangster turned vamp by the Caballero himself, can she survive in Vamp City?

“Vampire noir in L.A. by way of New Orleans, with progressive creatures of the night trying to solve a twisted murder mystery. Sophia is a powerful lead fighting to clear her name in C.D. Brown’s compelling debut.” (Alan Baxter, author of Hidden City and the Alex Caine series)

What listeners say about Vamp City

Enjoyable listen, it took a little before I was pulled into the story, but once it got going, it was a good story - enough twists and variants on normal urban fantasy to be fresh

OK, if you like vampires and werebeasts type of books then you'll probably like this as long as you are not looking for anything different.

There is a vampire from New Orleans, hmmm, sure I've seen that somewhere before, oh that's right, every other vampire story.

To be fair, the story is ok, and it isn't set in New Orleans, but it is just a bit meh. I'm sure that if you love vampire stories involving a strong female MC, then you'll absolutely love this, but for me, I just would have liked some originality in there, and that is just lacking.

The narration is ok, not good but passable, she seems to struggle a little on male voices, they all pretty much sound the same but the females are great.

Overall. if you just must read a vampire story, then this is for you, if not, then...

Vamp City is a nice long read, and I love learning about the different groups within the vamp community.

I would like to know more about Sophia’s life before she came to LA (is there a prequel book in the works?)

I just about live for reading/ listening to Fictional Novels. My specific tastes can be broad at times yet I believe my inner child must be quite the dominant force for when it comes down to choosing my Genre of choice I will spend a ridiculous amount of time and effort on Audible.com combing through all the different sub-genre's trying DESPERATELY to find a descent Vampire read...
With a big smile on my face, I was able to just listen to an excellent Novel

🌟P.S.
NOTE TO THE AUTHOR:
I am hoping , no begging, please let this be JUST THE BEGINNING OF A SERIES!!! Also PLEASE write THE next FEW SUPER DUPER Fast! and pretty please one ☝more thing Can you please Utilize the talented Veronica Giguere again, she is such an amazing Narrator!

Not A Typical Vampire Story

I've never read or listened to anything by this author, but as I'm a fan of this genre I thought I would give this one a listen. The storyline is original and different, not at all a typical vampire story.

This story isn't a horror story, nor is it a romance although our leading lady Sophia Fontanelle does find someone she may be able to spend the rest of her future with. It's a story about vampires living in Los Angeles and adapting to the death of the oldest vampire, their leader if you like, it's set in our modern age, with flash-backs to Sophia's life before she was turned. It's not a complicated story but it does have lots of factions to it, there are some humans, some shifters, and vampires good and bad.

I enjoyed the story and I liked the characters, the author's writing style is good and had no trouble holding my attention. There were three parts to the story which is involved and goes into a lot of detail as we follow Sophia in her journey from new arrival to Sherrif and leader of the free vampires of LA.

I loved the excellent narration by Veronica Giguere she did a wonderful job with this book, she totally nailed it with all the different accents and inflections. She brought each and every character to life for me.

Did not connect with the characters

I was given a free copy of this book in exchange for an honest review.

I love books which involve the paranormal -- vampires, werewolves, ghosts, wizards, etc. So, I was really looking forward to this book. Unfortunately, I found that I did not empathize with any of the characters -- I found them uninteresting and just didn't care about them at all. I found the story moved very slowly. There were little asides that I loved in this book -- for example, Sophia -- the main character -- is a vampire and cannot see her reflection in a mirror, so she cannot see how she looks when she gets ready to go out and is having trouble remembering what she looks like. What a great observation for a traditional vampire character. I just wish that these types of neat observances were more prevalent in the book.

The narrator, Veronica Giguere, did a good job in voicing the characters.

Yes, I had hoped to like this more than I did.
1st my list of Pros:
Narrator was clear and did a great job creating the characters.
The story had a promising storyline and did flow smoothly.
Cons: Though I felt the narrator did a great job, there were moments it came across somewhat monotone.
I could not connect with the characters and to me came across "hokey" most of the time.
This audio was given to me free at my request and I voluntarily gave this review

I have really conflicting feelings about this book. In one sense it was pretty good. Certainly, it's mechanically well written and perfectly readable. Similarly, I'm thrilled to have an ex-prostitute as the main character, an adorkable cinnamon roll love interest, and plenty of varied representation. Ther are white characters, black characters, Latinas, Omni-sexuals, rich, poor, etc. And both black and brown characters get to be good guys.

However, I have two pretty big complaints, both of which hinge on this same varied cast. First, in a very real sense, a lot of the book balances on the author creating opportunities to present the reader with one more quirky vampire subset. We have the vegan, the lispy Catalonian, the punks, the classic Hollywood era vamps, the 1950s gangster vamps, the sassy Latina vamps, the 1990s style gangland vamps, the sharp-tongued lawyer vamp, the "Omni-sexual" glam vamps, the start-up millennial vamps, etc, etc. etc. I very quickly got tired of meeting the newest type of vamp. I understand that being a noir style some of this was expected, but it was a schtick Brown leaned far too heavily on.

Secondly, while I appreciated all the representation in the novel, it was seriously compromised by being INCREDIBLY (and problematically) stereotypical. The Latina was a sassy sexpot. The black characters were gang bangers that didn't respect women and were questionably trustable. The gay (or omni-sexual) characters were campy. None of them were developed beyond the cliche. And the downside of many of them being on the heroine's side and therefor having more page-time was that they were given more opportunity to show off their stereotypicalness. Plus, they tended to be louder and more unruly than the white vampire groups. (There was an unmissable in-crowd and out-crowd.) I don't necessarily think the (white male) author meant it to be this way. But it was. The way the characters spoke, alone, was majorly problematic. So, taken all together it's cringy to the extreme.

I do think the narrator did as good a job with it as she could. But with so many characters using dated terms like, "babe" and "doll," it got hard to tell them apart.

Note: I recieved an Audible code for this book. I chose to listen and review it.

it was okay. I didn't really connect with any of the characters. The story was fast moving and had action all the way through. It was just a tough read for me.

I really hope there are more adventures ahead for these characters! Loved both the story and the performance.

I don't normally like genre fiction, but the storytelling is sound and the jokes land. the world is well designed and built.

A Cool New Take on an Old Theme

Vamp City by CD Brown is a solid adventure in the City of Angels - but from a perspective not often seen.
Sophia is an ancient vampire who has come to the city to help others like herself enjoy the best of vampire life (death?) without having the mortals breathing down their necks.
In a city where just about anything goes, vampires thrive in the night, but many want to find a way to coexist with humans. Many, but not all. Sophia must unify the vamps and purge those who want dominion over humanity.
Vamp City is a story with many twists and turns, humour, sensuality and heart pounding fight scenes. It's a great ride!
Veronica Giguere does a fantastic job of giving each character a unique voice that is recognizable throughout the nearly 9 hours of the book. Her story telling ability makes the time fly by - I didn't want to stop listening until the end.
My only criticism of the book is that, in the audio version, I found it confusing when Sophia was flashing back to her past in New Orleans. The information was important and useful to understand her character and vampire history, but I didn't always recognize immediately that it was a flashback, even when there was some kind of bridge to the memories. Looking at my copy of the book, I can see that reading it, I would not have had the same problem. Interesting difference between visual and aural intake, and maybe just me....
In all, definitely recommend the novel, in whatever form you enjoy best.