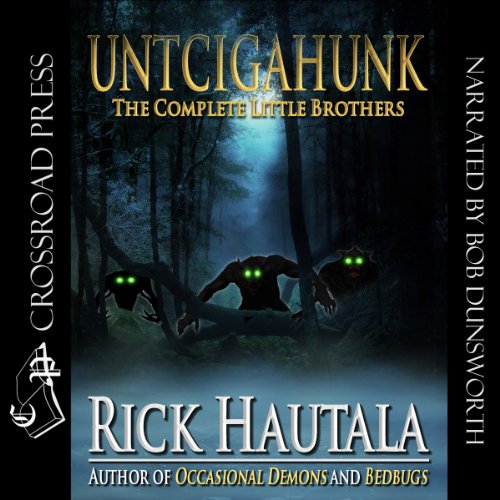 By: Rick Hautala
Narrated by: Bob Dunsworth
Try for £0.00

It has been five years since Kip Howard saw his mother killed horribly by a blur of "little brown things."

Five years of nightmares and a terror of dark places. Five years of struggling to overcome what must have been just his imagination... But the "untcigahunk," the Indian word for "little brothers," are no one's imagination. Hideous forest creatures who feed every five years on human flesh, the little brothers are about to emerge from underground once again. Only this time, there will be no escape for the young boy who witnessed their last feast.

Untcigahunk - the novel - is an updated version of Rick Hautala's classic novel Little Brothers. Also included are seven short stories about the untcigahunk:

"Love on the Rocks"

"Deal with the Devils"

What listeners say about Untcigahunk

I did not see this one coming! I love horror books and this one was a pleasant surprise. The characters are believable, have allot of depth, tied together beautifully and you catch yourself rooting for the underdog! The story revolves around a boy & his family whose mother was murdered while clearing brush on their house site. "Kip" saw the whole thing but is in therapy for repressed memories. It is five years later & his bully big brother Marty picks on him relentlessly and his attorney father never seems to have as much time for him as he wants despite being a great dad. They live on old native american land and the local kids, including Marty & his buddy Al go to the old "indian caves" to "party". People start to disappear & the kids believe it is the spooky old drunken indian who is the killer. There are dark demonic "little brothers" aka demons afoot. Kip & the old indian are the towns only hope.

The story moves along at a great pace. Just enough horror, suspense and good story telling to keep you riveted. The author does seem to be a little obsessed with people hocking up gross mucous..........seriously it's pretty gross..............but other than that I have absolutely NO complaints. There are even short stories at the end that go along with the book and further show the Untcigahunk for the vicious scary little demons that they are. Great narrator as well. I wish there were more stories available from this author!!

GET IT you won't be disappointed.

Would you listen to Untcigahunk again? Why?

If there was nothing else to listen to, I would. It was a good story the first time around, but not good enough for me to listen to again.

What was one of the most memorable moments of Untcigahunk?

When Kip stopped being the victim and stood up to his older brother. I mean really!

Don't turn off the Lights!!!

Very interesting idea for this book. There were parts where I reallly just wanted to slap the main character silly and tell him to get over himself, but overall a good listen.

Would you listen to Untcigahunk again? Why?

What does Bob Dunsworth bring to the story that you wouldn’t experience if you just read the book?

He started out sounding a little mono-tone to me....but as I got further into the listen...his voice lent itself well to the Native American story line.

I wouldn't listen again, but, it's a good 1st time listen.

Just my take on it

What was most disappointing about Rick Hautala’s story?

I really did not like the ending to this episode.
It seemed like it was just a chapter, and then there was no more

I enjoyed this story immensely. It was unpredictable and frightening. Hoping for another book of this type from the author.

What made the experience of listening to Untcigahunk the most enjoyable?

It kept me on the edge of my seat! There were times I found myself yelling at my radio! lol

What other book might you compare Untcigahunk to and why?

Pitch dark...because the critters came out at night

are you afraid of the dark?

In a few of the scenes the narrator repeated himself (it started to get annoying). Also, it was way to long! Overall I liked the book but it wasn't as good as the first one!