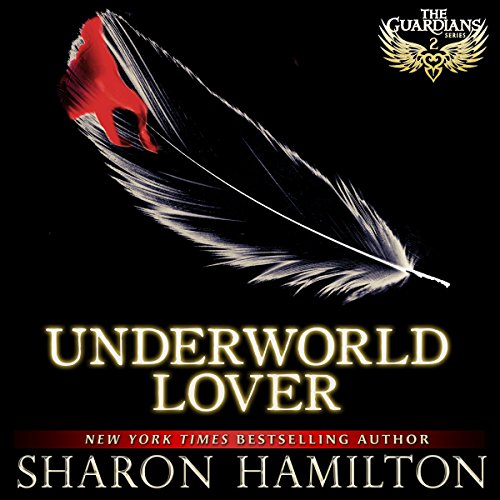 Joshua Brandon, a legendary and powerful rogue dark angel, meets a human woman whose soul he cannot take, and finds something he has not experienced before: love. At the same time, a new director comes to power in the Underworld, who asks for a test of Josh's loyalty by delivering this very woman to him.

Melanie Worthington is back among the living, after reeling from the suicide of a close friend. She has no idea she is to become the pawn between two powerful dark angels, one who would command her as his personal concubine, and the other who would set her free.

Will their love survive the battle between the two dark angels, or will Joshua risk his own immortal life to protect the woman he loves?

Where does Underworld Lover rank among all the audiobooks you’ve listened to so far?

This was very enjoyable the story is expertly written and was a great story of forbidden love and the sacrifice's being made for Him to spend the rest of his day's with his human lover. i really enjoyed the whole story and we have some amazing background characters helping to bring this story in a wonderful magical place

What was one of the most memorable moments of Underworld Lover?

the story as a whole as the whole fight of good against evil with the amazing rich romance makes this book a page turner till the very end, and a must read for all paranormal romance lovers

What does J. D. Hart bring to the story that you wouldn’t experience if you had only read the book?

The whole story is filled with twists turns and super romantic encounters and leaves you waiting to know more till the very end. A great read with the combined excellence of Sharon's writing and JD's ability to emerge in the story make the combination a fantastic listen.

Josh is a smoking hot dark angel. His job is to make sure that he gets the souls of those that are on the edge of taking their own lives. Josh is suddenly embroiled in office politics when there is a new director of the underworld that doesn’t seem to like him. Peter, the director, has his own agenda and Josh is in his way. Peter wants Melanie and he wants to test Josh by having him get her. What happens when there is office drama and red tape in hell? Will the Underworld get a new soul? Will Peter permanently vaporize Josh into unemployment? Download this read and find out.

This is the second book in The Guardians, I did not listen to the first and didn’t feel like I had missed anything about Josh. A quick note about the narrator, JD Hart, I normally don’t go for men narrators due to range of voices, but boy can this one put the old world sexy into Josh’s voice.

If you could sum up Underworld Lover in three words, what would they be?

I didn't like Josh in the first book, but he grew on me in this book, by the middle of the book, he burrowed himself in my heart. He is my book boyfriend now :D

Which character – as performed by J. D. Hart – was your favorite?

I think JD's performance of all the characters makes hard to choose, but Josh will have to be my fave, and Audrey as a close second.

Love always wins, even in the Underworld!

A very different prospective in the angel genre. Just as with book one of the series, listening to the audio made a big difference for me from reading it myself. I totally recommend it to even the most picky listeners, I am one too.

Where does Underworld Lover rank among all the audiobooks you’ve listened to so far?

The duo Sharon Hamilton and J D Hart never Disappoints, for sure. I have all but maybe two or three of Sharon Hamilton's Audios and I love her writings! This story was awesome, new concept from any I have read before and kept my interest. Then you have J D Hart's Voice. What can I say, awesome sultry, sexy. You will love this one too!

None others that I have read

yes but I was interrupted a time or two.

It's like a new book with the way JD brings the story to life. It was a story filled with love, romance, and adventure. If you love audio books don't miss this one

Who knew dark could be so loveable!

This is getting even better!!! JOSH! I hated him in book one “Heavenly Lover”, I really did! He’s a despicable creature whose idea of fun is helping innocents throw away the greatest gift a human has, “life”! So, then, can someone please tell me how Sharon manages to turn my whole brain and heart around and get me to absolutely love this horrible, dark angel. Yes I do love him and feel sorry for him and have no idea what is wrong with me.

Sharon did it again and even better! She has followed up on ALL the characters which I love and managed to create some new ones whose butt I would kick for free. Her wonderful imagination has created a story you won’t forget easily because it’s captivating. I couldn’t stop reading/listening because I was so immersed in the plot. If you were having second thoughts about getting this book, don’t, you will thoroughly enjoy it to no end, really you will!

This one is much, much darker than book one with a lot more action which I love and when the bad guy becomes the hero IT’S JUST TOO MUCH!!! Even Audray manages to win a place in my heart and I disliked her almost as much as Josh in book one too!

We’re introduced to JONAS, oh my, oh my… are we in for a treat in book three. Yes I know I’m ahead of myself here but I just know! Expect hot, fan-yourself scene with this one, I just know it.

J. D. Hart did a fantastic job of the narration. He’s so good with the different voices and accents. If you’ve heard him you will know that he as a deep, manly voice, yet he’s so good with the female voices too! He doesn’t try the high pitches just the subtle intonations, the pauses, the feeling comes right through and you can visualise the women as if they were right in front of you.

This sequel is full of surprises, more twists and turns promising and delivering entertainment from the beginning to the end. Very passionate and hot scenes that Sharon depicts so vividly. Another job really well done!

If you could sum up Underworld Lover in three words, what would they be?

Underworld Lover is the 2nd book in Sharon Hamilton's Gaurdian series and Heavenly Lover was the lst book about the good angels and this one is about the dark angels. Joshua was the bad guy in the first and turns into a wonderful, sensual exciting hero in this 1. Also Audray makes a welcome return with her wonderful sensuality.

What about J. D. Hart’s performance did you like?

JD Harts performance is always amazing and absolutely wonderful to listen to. 1 of the funniest scenes is when the old rocker is persuaded to die. JD Hart's narration was superb and his range was a delight to listen too.

Angels come in all sizes and disguises

I was travelling on a train journey while listening to most of this wonderful story. JD Hart brought Sharon Hamilton's wonderful characters to life in such a unique and thrilling way i felt i was part of the story too.

What made the experience of listening to Underworld Lover the most enjoyable?

The feeling of being right there in the middle of the story. I could feel the characters along with their struggles and triumphs. J.D. Hart did a wonderful job of bringing the story to life for me.

I had listened to "Heavenly Lover" also written by Sharon Hamilton." Underworld Lover" is the sequel and an excellent follow through of a story that proves even in the Underworld a mortal life of love is worth ten immortal lives.

I loved the scene where Beau the rocker dude was being coxed into taking his own life to be eligible for a dark angel in the underworld.

I would love to read and listen to more paranormal books by Sharon Hamilton. Yes, with this book I felt the full range of emotions.

Keep them coming Sharon Hamilton! We share a common belief that love is the most powerful force in the universe.

THIS IS FAST BECOMING A FAVOURITE SERIES FOR ME

Sharon Hamilton has written another imaginative addition to her new supernatural world where good and evil battle for the lives and futures of us mere mortals. This time Joshua has to decide between the human woman he loves and his duty to collect her soul and make her into a Dark Angel. His new Boss makes drastic changes to the Underworld, which includes murder, resurrecting evil creatures and choosing a mate...... and guess who he wants.

There's great characters, it's action-packed with twists, intense, emotional, there's a good romance which has nice sex scenes and it also includes much loved characters from book 1. BUT the true magic comes from the many voices provided by a maestro narrator J D Hart who's sexy Hero's accent was just so yummy.

Worth a credit? If you keep writing them Ms Hamilton and JDH keeps narrating them then they'll be an auto download for me. So YES well worth a credit.