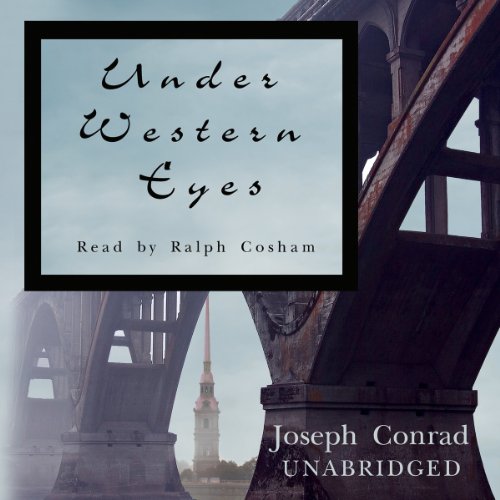 By: Joseph Conrad
Narrated by: Geoffrey Howard
Try for £0.00

Under Western Eyes, Joseph Conrad's novel of political treachery and oppression, of betrayal, guilt, and intrigue, begins with a bomb that kills its intended target, a hated Russian minister of police, along with a number of innocent bystanders. A young student named Razumov hides the perpetrator, then betrays him and becomes a spy among his exiled comrades. He faces a moral dilemma from which there is no escape.

Conrad professed that he intended to render "the psychology of Russia", a country being driven by a Czarist despotism into anarchy by revolutionaries, "unable to see that all they can effect is merely a change of names". This masterwork, published six years before the Russian Revolution, is a chillingly accurate prophecy of what was to come.

What listeners say about Under Western Eyes

A gripping spy thriller that should be better known. Written before the Russian Revolution; but its world of spies, terrorists, secret police, idealists and cynics, and everyone stuck in between their machinations has stayed completely relevant for a hundred years.

A jarring framing device that interrupts the story at intervals, is probably what keeps this out of the top of the Conrad canon. But I find it more enjoyable than The Secret Agent, maybe because of the more relatable protagonist-- the reluctant double-agent Razumov, full of bitter contempt for both sides, tormented by his conscience, and hopelessly between a rock and a hard place.

As for the audio-- the reader makes no attempt to dramatise or provide individual voices for the characters, but reads in a clear, consistent, slightly clinical tone that works well with Conrad's prose but less well with the scenes of high drama and emotion. In the absence of a really great performance this a decent version, neither adding nor detracting from the book.

Joseph Conrad provides a beautifully told story through the insights and words (mostly) of a British journalist covering Russia at the turn of the Century. Taking place in St Petersburg and Switzerland we gain insights into revolutionaries, terrorism, plots, state police, betrayal, love, trust, bravery and lots more. The story is told through a range of characters whose lives and relationships connect - some happily, some tensely, some tragically. Beautifully written and narrated it is filled with tension, suspicion and suspense, although elements become more predictable as the story unfolds. There's a neat twist on what is it that makes 'character' and whether the villain himself displays more than some of the other 'revolutionists'. Interesting and enjoyable classic.

A multifaceted study of the psychology of betrayal

From early on I noticed strong parallels with Dostoyevsky's 'Crime and Punishment' - and was then surprised to discover that Conrad had little regard for Dostoyevsky. The theme is similar: a young, emotionally rootless student commits a crime; in this case the betrayal to death of a Revolutionary fellow student, only to find an intuitive need for personal redemption.
The structure of the novel makes it difficult to follow at times, but I found that the synopsis of the plot on Wikipedia helped me to navigate the shifts in time and place without giving away what was to come next (because both the novel and the synopsis are written in four distinct parts). This difficulty was, in part, due to a rather wooden narration, with limited tone, and not much attempt to characterize the different protagonists. However, I managed to acclimatise myself to this reasonably quickly.
I found Conrad's portrayal of the diehard revolutionaries as ' dazzled by the base glitter of mixed motives, everlastingly betrayed by short sighted wisdom' had a convincing psychological authenticity to it. Would I recommend this novel? Yes, I would.

A novel without heroes but with amazing heroism

I'm beginning to think there are absolutely no whimsical novels written about the period between Bloody Sunday and the Russian Revolution of 1917. Written in 1911, Conrad's 'Under Western Eyes' is a lot of things. It is his response to the revolutionary fervor in Russia and Eastern Europe. It was a response to Dostoevsky's novel 'Crime and Punishment' and if previous scholarly works are to be believed, it may have also been a response to his own father who was a famous Russian revolutionary. Lastly, it was a response to the way the West views all of these things. The way the West can't fully grasp the depth of Russian despair and the innate conflicts within Russian ideals and Russian movements.

It isn't my favorite Conrad, but it definitely belongs in the pantheon of Conrad's great novels. It is a novel without heroes but with amazing heroism. Conrad is able to tap into the emotional currents of several unique groups of Russians during one of its most fascinating times.

Anyone interested in the Russian Revolution and the period right near its inception should not skip this book.

The story is one of Conrad's best; he hits the main theme, the East/West contrast, a bit relentlessly, but it doesn't matter. The book works like a well-oiled engine and is enthralling from tragic beginning to tragic end. You are wrung with pity for all the participants. Try listening to this as we did after hearing Dostoyevsky's The Demons/The Possessed/The Devils (different translations, same book). Conrad's politics are preferable, his book better crafted, even though individual scenes in the Dostoyevsky are as magnificent.

Oh how I had hoped this would be so much more than it is.

I have to admit total confusion as to what Conrad hoped to achieve with this novel. What starts off as insight into how precarious and arbitrary life in Russia under the government was at the time of the novel, ends with the (almost) humiliation of the people who sought to revolt against it. Everyone comes out as a loser in the end. Was Conrad trying to say everything in Russia is bad, even the people trying to change Russia? Was he really that cynical?

Then again, seeing as how events turned out in the years after the novel was published (the rise of Communism) then maybe Conrad really was onto something. Yet the book never really attempts to address the broader issues of Russian social and political reform because its focus is only on a few characters, nearly all of whom are either misguided, manipulative, or are outright fools. I kept getting the impression Conrad wanted to damn all of Russia, past, present, and every possible future.

What I found most interesting, however, was the character of Haldin. Here was a young man who, though a terrorist (and murderer), understood whom he was fighting so well as to ruin the life of a perfectly innocent person long after he himself had been executed. He wanted to light a fire under the ass of the comfortable middle class who had gladly allowed themselves to be ruled over for just a few pieces of silver at a time. Haldin saw how it wasn't those in power who were the most dangerous, but those complicit in keeping them in power. The same could be said of our own times in our capitalist society that gladly allows the business class to rule over the rest of us. We just want our creature comforts and give them all the power. Never does it occur to us to start throwing bombs around to enact real change even though the situation probably calls for it at this point.

And that's the way I thought this novel was going to go. I assumed Razumov would wind up being forced into becoming a terrorist, too, that he would be 'woken up' and would defect from his comforts to fight a oppressive system. I assumed we would see the development of a character whose terrorist actions (like Haldin's) would be explored and sympathized with. Haldin was a total mystery to us and so it's easy to denounce him as a wicked terrorist, but to have followed Razumov's path that would lead him down the same road as Haldin's, to end the book where it began but with another character, would have been rather thrilling.

But where this book goes is instead to neutral Switzerland where Russian expats live comfortably and foolishly as they plot against the Russian government. These people are not heroic freedom fighters, but just a bunch of fools who will never change anything. Why Razumov would even be needed to spy on them seems like a total waste of time to me. In fact as the book went on I was not surprised Razumov grew more and more to dislike these people and that he was was glad to help out the Russian officials. But then we get another shift where he changes sides (too late) and winds up a cripple. I didn't buy any of it, to be honest.

I have to admit I was thoroughly lost by the end of all this. I have no idea what Conrad was trying to really say and can only really recommended the book on the strength of the characters and the overall story it does wind up telling. Granted, it's a cynical and depressing affair, but it feels realistic. The only thing going against it is that only a few years after the book was published another young man, Gavrilo Princip, managed to shake the entire world up with his own actions. I don't believe Conrad would have thought it possible that so much could actually change at the hands of just one individual and so real history seems to work against the point the novel was trying to make about everyone being ineffectual.

So I'll have to put this one down as my least favorite Conrad novel. I found half of it thrilling and well written, and the other half to be boring and limited of insight. Overall it is well written like all of Conrad's work and the language is always a joy to tangle with, but I just never got the feeling that this was a book with a solid foundation or plan.