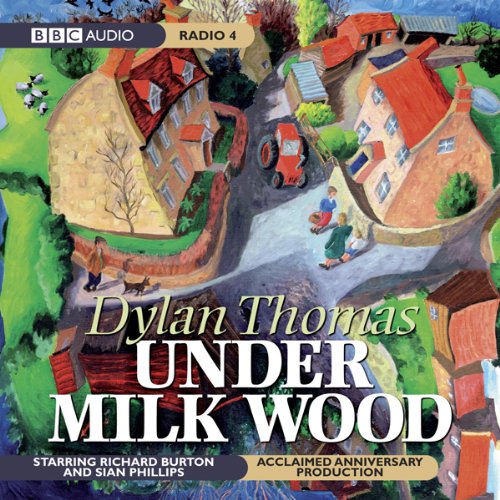 Richard Burton’s voice has been digitally remastered and seamlessly mixed with an all-Welsh cast to create a magical, fresh visit to the unique but universally recognisable world of Llareggub.

Richard Burton’s inimitable narration as the Narrator in the BBC’s 1963 recording of Under Milk Wood was hugely acclaimed. In this 2003 production, the famous radio play has been given a fresh lease of life. Burton’s unforgettable performance joins a celebrated all-Welsh cast in a highly acclaimed dramatisation of this classic ‘play for voices’.

Touching, eerie and very funny, the play tells the story of a day in the life of the inhabitants of a small Welsh seaside town, their dreams and routines, their loves and regrets, their hopes and fears. With characters and phrases that have entered common parlance, the play opens with ‘To begin at the beginning’ and features such much-loved characters as No Good Boyo, Lilly Smalls, Polly Garter, Organ Morgan, and Captain Cat. Among the all-Welsh cast are Siân Phillips, Matthew Rhys and Glyn Houston, as well as a special guest appearance by John Humphrys. With an entrancing new musical score by John Hardy, this production is set to become the classic version of a spellbinding play.

in my humble opinion

Would you listen to Under Milk Wood (Dramatised) again? Why?

I have listened to it twice and will return to it many times. Burton's voice is wonderful and both times I've found more in the story. Thomas is a very good storyteller and this story is full of humorous details of life in a small community.

What other book might you compare Under Milk Wood (Dramatised) to, and why?

I'm not certain as I've not listened to other dramatized versions of books.

Have you listened to any of Richard Burton’s other performances? How does this one compare?

Richard Burton could read the telephone directory and I would enjoy listening to him. He had a voice that was magical and this one doesn't disappoint.

If you like classic mid twentieth century amazing literature, this week not disappoint. Burton is so well supported by this Welsh cast that it borders on perfection

A beautifully graphic poem, which takes you on a journey through evedyday life; in a seaside town....or any town!

It said that 'heading' was optional?

The whole production was marvellous! MUCH BETTER than when I was forced to read it for my English 'O' level!!!

Under Milk Wood was written for Radio, and this version, with Richard Burton's gravelly voice, makes a brilliant audio book.

This town's as full as a lovebird's egg.

"This town's as full as a lovebird's egg."
- Dylan Thomas, Under Milk Wood

This book has languished on my shelf.
Ignored.
Left alone.

I bought this book years ago. It was a deal. It was a steal. It was $2 at Goodwill. I recognized Dylan Thomas and knew it was a Folio edition. $2? Value? Done. I brought it home, put it on the shelf. Thought about it only narrowly. I figured it was a book of poetry. Poems. Fights against the dying of the light and whatnots.

Nope. It is certainly poetic. Lyrical. Whimsical. A play, however. Meant for many voices. An innovation for Radio. Meant to be read. Think of later James Joyce, but something easy to understand. A well-spoken lust dream in a Welch coastal town.

Some of my favorite lines:

"It is spring, moonless night in the small town, starless and bible-black, the cobble streets silent and the hunched, courters'-and-blackrabbits' wood limping invisible down to the shoeblack, slow, black, crowblack, fishingboat-bobbing sea."

"From where you are you can hear their dreams."

"And before you let the sun in, mind it wipes its shoes."

"And high above, in Salt Lake Farm, Mr Utah Watkins counts, all night, the wife-faced sheep as they leap the fences on the hill, smiling and knitting and bleating just like Mrs. Utah Watkins."

"...who kissed her once by the pig-sty when she wasn't looking and never kissed her again although she was looking all the time."

"Time Passes. Listen. Time passes. An owl flies home past Bethesda, to a chapel in an oak. And the dawn inches up."

"There is no leg belonging to the foot that belongs to this shoe."

how perfect. sweet and sad. the writing and the voices are masterful. my favorite book

My family was from a small Welsh town. We go back periodically for visits. I think I have met all the characters in Under Milkwood. Richard Burton's performance' and all the others in the recording for that matter, was beyond superb.

A classic - that I have read many times but wanted to have handily on ipad to listen to at any given moment. It is magical...shut your eyes - and follow along the streets, meet the people - a masterpiece - of writing and reading.

Not the cast I was expecting.

I had tapes of this years ago which I played to death and remember very well. several of the characters are different in this version.

This beautiful prose play is brought to life by an excellent cast lead by Richard Burton. The wonderful turn of phrase and intimacy of the inner thoughts are well realized, punctuated by Dylan Thomas ' mastery of the English language. The listener follows the townspeople through a surreal dreamland of memorable characters and language. this play is a masterpiece, masterly performed and should be heard by all. A big thank you to Audible for making this classic available to all.