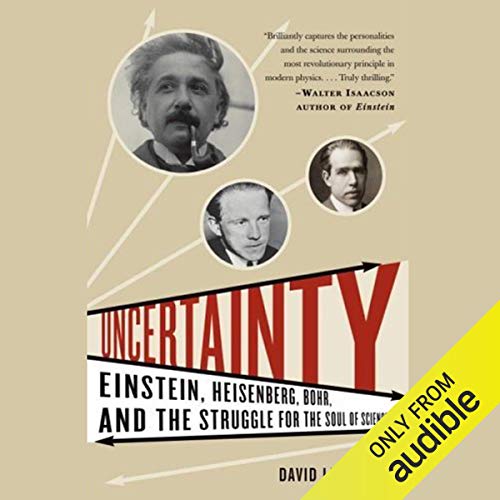 By: David Lindley
Narrated by: Robert Blumenfeld
Try for £0.00

A quick Google search is enough to suggest that the Heisenberg uncertainty principle is the most widely referenced theory in modern physics. It is frequently employed by academics in virtually every field, to discuss the challenges inherent to studying history, or government, or literature, to name a few. The famous principle even makes its way into entirely non-academic settings; for example, it was recently invoked by actor Steve Martin to explain the effect of the public eye on a star's private life.

Frequent extra-scientific application aside, the Heisenberg uncertainty principle is important because of its profound implications for science. In Uncertainty, author David Lindley brings those implications to light through a compelling, concise narrative of early 20th-century physics. Narrator Robert Blumenfeld delivers a robust, congenial reading notable — like Lindley's prose — for both its explanatory and storytelling power.

Uncertainty follows a sizeable shift in human thought, with all its accompanying tension and turmoil. Lindley tracks the entrance of unpredictability into the world of science, from its faint whispers in kinetic theory to its clear, undisputable voice in the Heisenberg uncertainty principle.

While focusing on the development of theory, Lindley creates a dynamic portrait of the scientific process by drawing on the events and people that shape it. Employing a remarkable talent for a variety of accents, Blumenfeld develops this cast of brilliant, bizarre characters — including Bohr, Schrodinger, Einstein, Heisenberg, and Born — with consistency and charm.

The authenticity of Lindley's narrative is enhanced by his use of primary source data. He often allows his characters to speak for themselves, favoring the original voice over paraphrase even when their words are not in English. Blumenfeld handles these languages — primarily German and French — with apparent fluency, adding richness to the auditory experience of the story. —

Werner Heisenberg's "uncertainty principle" challenged centuries of scientific understanding, placed him in direct opposition to Albert Einstein, and put Niels Bohr in the middle of one of the most heated debates in scientific history. Heisenberg's theorem stated that there were physical limits to what we could know about sub-atomic particles; this "uncertainty" would have shocking implications.

In a riveting account, David Lindley captures this critical episode and explains one of the most important scientific discoveries in history, which has since transcended the boundaries of science and influenced everything from literary theory to television.

"Lindley brilliantly captures the personalities and the science surrounding the most revolutionary principle in modern physics. At stake are our deepest philosophical beliefs about reality. This book is so lucid that the issues are not merely understandable but truly thrilling." (Walter Isaacson)

What listeners say about Uncertainty

It is quite good however not as good as John Gribbin's "In Search of Schr?dinger's Cat", which I would like to see here on Audible.

fascinating insight into the real drama of physics

The early 20th century was by no means an orderly, calm period in the world of theoretical physics. New discoveries in relativity and quantum mechanics were casting increasing doubt on classical physics. Scientists were learning that some phenomena, taking place at the unseeable atomic level, seemed not to be deterministic and predictable, but probabilistic and not so predictable.

Uncertainty provides an informative overview of the major players during this era, and explores the disarray that a changing state of knowledge brought to the physics community, with some more conservative figures, such as Einstein, advocating caution and their own belief that the universe could not truly be so disorderly, and younger physicists, such as Heisenberg, rejecting scientific orthodoxy and searching for the answers in more radical ideas. While I'm sure there are better books about physics and better biographies of famous scientists, this one does capture the division that quantum mechanics brought about among most the brilliant, legendary physicists, and their all-too human arguments as they struggled to make sense of its paradigm-shaking implications. The author also notes the background of political and social unrest taking place in Europe in the 1920s and 30s, raising the question of how much this drama may have been a part of the soul of the scientific drama.

I really enjoyed this book. The narrator did a great job of bringing alive the scientists who were involved in the great ideas the led to the development of Heisenberg's Uncertainty Principle.

The story is told in a way that permits the listener to grasp complex subjects, but not be overwhelmed by those topics.

Being certain about UNcertainty

This book deals with the history of quite esoteric and complex concepts which have transformed the nature of science - quantum mechanics, the nature of causality, the limits of predictability, the essence of reality and the uncertainty principle. It could be dry, boring and unintelligible instead this is human, intelligent and witty in its presentation of the history and development of these theories and ideas. It is so refreshing to hear such an illuminating and at the same time entertaining presentation of such otherwise difficult material for the non-physicist.

Not for the Masses But...

WOW. I really enjoyed this book. It took a bit for me to get into it so I restarted several times. And each time through, I learned something and added to my understanding. This is not easy material but I am so glad it's not "dumbed down" here.

If you like science and want to understand quantum mechanics, and appreciate hearing about the heroes of scientific discovery---here's your book.

This is a nice historical description of the characters and the ebb and flow of thought and theory leading to modern quantum mechanics. It is a very good balance of light-science, personal stories, and historical framework, which makes it enjoyable and educational.

A philosophically inclined book on quantum

This book written by a physicist is not only a historical sketch of quantum mechanics' development but also philosophical recollections of what it means, in particular from the angle of the uncertainty principle. Short as it is, the book may well be a good companion to Manjit Kumar's "Quantum. Einstein, Bohr, and the great debate about the nature of reality", all the more so because the latter is mostly historical. And even in purely historical terms it's worth reading about the same events from different angles, or even just to ponder about the same important histories again, which may inspire us in a different way.

Certainly Not for everyone

When I give a lecture on patient assessment I start off by saying “Begin your assessment from across the room. You want to first view your patients with as little influence upon them as possible. You know, like the Heisenberg Uncertainty Principle: the process of looking at something changes it.” Then come the deer-in-the-headlight looks from most of my students. That’s perhaps the look that will obtain from many of the readers of this book. Unless you’re a theoretical physicist, taken a class in physical chemistry or maybe thermodynamics, you’ll probably have that same look reading this book. It’s not for the average reader like The Immortal Life of Henrietta Lacks is. That was a book I loved and could recommend to anyone. This is tough stuff.

The publisher summary comments that “David Lindley captures this critical episode and explains one of the most important scientific discoveries in history, which has since transcended the boundaries of science and influenced everything from literary theory to television.” Well, maybe so. Transcended as in transcendental meditation? Not guaranteed to help one achieve bliss, with “certainty,” it will definitely help many to go into deeper levels of consciousness... you know... like to sleep.

This is not a condemnation of the book. On the contrary, except for my own personal perception of a certain lack of cohesiveness on the part of the author, I thought the book was okay. It was little dry for my taste (not in the way I like wine) and certainly not riveting. When I finished Michio Kaku’s Parallel Worlds I asked myself, "holy sh--t, WTF was that all about"? I had no clue but I sure enjoyed it. Michio Kaku has that talent. It’s like S&M for some folks. It may hurt but on another level it feels good. I think Lindley, god bless him, lacks that talent.

If you’re interested in the history of science and have a science background, go for it. If not, tread lightly. It just might be a pain that does not feel good on any level.

So much insight to the names we only read in books. Good work translating difficult language into plain language. Excellent read, but definitely not for everyone.

I'd hoped for more theory, but still very good.

I think I would have liked more theoretical explanation amongst the narrative, but I got a lot out of this book and would probably listen to it again sometime.

It started out educational and ended in a story. I enjoyed it as one of the first books to read in order to understand the formation of quantum theory.