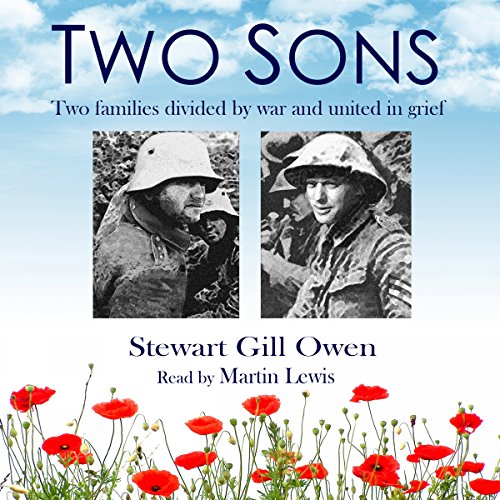 In 1932, Hitler and the Nazi Party were threatening to take control of Germany, and there was a growing fear of another war. In the summer of that year, John and Annie Williams make their annual trip to visit their son's grave in the Flanders region of Belgium. Their son, Herbert Edward Williams, had been killed while fighting at the battle of Passchendaele in 1917.

Erich and Martina Lehmann from Germany are also in Flanders to pay their respects to the memory of their son, Kurt, who died in the same campaign. During the visit, confrontational events take place. The story moves from the battlefields of the Western Front to the domestic life of the families over a period of two decades.

Having lost their sons in one conflict, both families fear that they may have to make further sacrifices.

This story does not seek to be pro-British or pro-German. As we travel along the journey of our lives, we will experience joy, pride, despair, love, grief, and the fear of loss. Two Sons is about the emotions, the passion, and the feelings that many of us share, regardless of nationality, class, faith, and status.

What listeners say about Two Sons

Would make a film or great television series

Would you try another book written by Stewart Gill Owen or narrated by Martin Lewis?

I really enjoyed this audiobook. It could easily have been written for a television series. I hope to see this happen one day. It was full off drama and comedy. Very well written and acted out by the narrator. I look forward to the next book in the series.

What other book might you compare Two Sons to, and why?

There is a lot of dialogue in the book and it almost felt like a show, with chapters being very episodic.

What does Martin Lewis bring to the story that you wouldn’t experience if you had only read the book?

I found the narration very convincing. The characters were picked out very well and each one had a different voice and personality. The narrator did a very good job!

What character would you cut from Two Sons?

All the characters felt quit individual and had important rolls in the story, the writer did a great job creating these characters. I was keen to see how it ended for them all. The narrator did a great job acting them all out, some of the very different.

Well written and excellently narrated, very easy to listen to. A story that still has relevance now.