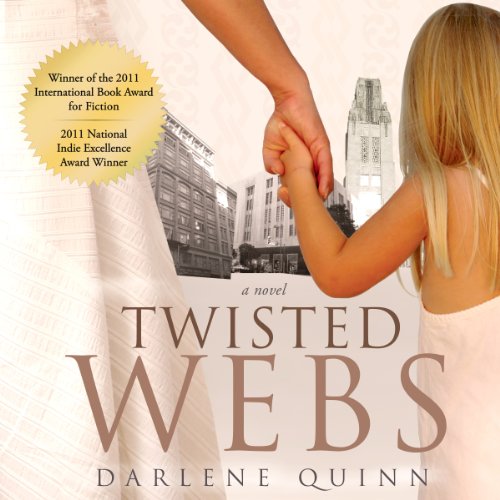 Twisted Webs unravels the mystery of the abduction of Callie's identical twin. There is plenty going on all the way to the end. With candor and sensitivity, Darlene Quinn probes the shock and despair, the anger and frustration of parents suddenly missing a child and the long-term effects on a family wrestling with these emotions. Each of the novel's complementary storylines - Paige Toddman's reunion with her mother, Viviana De Mornay's secret, and others - ties to the redemptive theme of motherhood.

Suspense electrifies each short, fast-paced chapter. Could Caroline Stuart have hired someone to kidnap the infant because of her deranged jealousy and desire for the Taylor family to suffer pain, as she does? Is the Jordon's department store executive a suspect because of personal grief? The abducted twin's father hires a deeply empathetic detective to answer those and many other questions that arise during her disappearance - at the close of which the author has crafted a knockout ending.

What listeners say about Twisted Webs

How would you cope if one of your identical twins was removed from the hospital at birth and appeared to disappear off the face of the earth? And, if you were reunited eight years later, how would you respond to the woman who had raised her - should the child be wrenched from all that she holds dear, to return to her birth parents?
These are the questions raised by Darlene Quinn in book 2 of the Webs Series.

There is a bit of a cast of thousands and I did eventually have to write myself a 'family' tree to explain who was who, but in brief: Ashley Taylor gives birth to Callie and Cassie, but only Callie returns home with them. Cassie is abducted by Mario Castanelli, to replace the baby his wife has recently lost. Although he knows this is totally wrong, he sees it as the only way to bring Erica out of her depression and back to him.

This book was very much sold as a kidnap story, so I wasn't prepared for all the corporate department store stuff. I tried very hard to get involved with this, I even re-wound a large chunk of the book to try and get a grasp on it, but a complete lack of experience with the corporate world, combined with a narrator who seemed to be in a race against time, I eventually gave up and concentrated on the characters and their social interactions.

I was given this audiobook through Audiobook Boom and Audible, in return for an honest review. I would have liked to have given a higher star rating, but I didn't enjoy the narrator, who was not only fast, but also rather strident and not good at male voices (her best voice was the sultry Vivianna). In addition, the business aspect of the narrative left me cold.

I have listened to a few books by his author and narrator and I really like them. This book is a standalone listen, yet part of a series with regards to some characters. I love how the author is able to put some great twists in the story. Having worked retail in some large department stores, I was intrigued with the background of the book. The narrator was able to put so much emotion into her performance. I was voluntarily provided with this review copy audiobook at no charge by the author, narrator, and or publisher.

I had absolutely no idea that this was a sequel until someone recently told me. It is a standalone book to me and you do not need to read the first book. I didn’t and haven’t.

The main focus of the book is the abduction of a twin baby girl from the hospital right after her birth. It focuses on the lives of all of the characters and how the abduction affects their lives.

Loved the action and “twists” but I did feel the ending was a bit trite. That said, I would still recommend it. The book was worth the time and price.

If a child is kidnapped, I have always felt contempt for the kidnapper. This books and it’s “twists” makes you think twice about being judgmental. The characters were shown from very different points of view.

I hated to put the book down but was grateful for the short chapters so that I could. It is a page turner!!!


Did feel the ending was a little too much like the plot of a 70’s movie about twins.

This book is about abduction of a twin baby girl from the hospital right after her birth. There are a lot of different characters and story lines and I enjoyed getting to know those characters and how the abduction affects their lives. I don't want to give to much of the story away but it is an awesome book.
I was given this book in exchange for an honest opinion.
This is my first book by this author and narrator and I fell in love with this book. I would recommend this book to everyone who loves a great story.

I was given this book in exchange for an honest review, unfortunately it wasn't a favorite of mine. There are too many characters and story lines for my taste. It couldn't hold my interest, very drawn out. The narration was horribly annoying!

I didn't realize this was a sequel until others were discussing the big department stores, designer fashions and leveraged buy outs. I was hooked on the plot of one of the babies, identical twins was snatched the day she was born. There were some interesting twists and a red herring or two could be found. It kept me interested, but the ending was just too contrived.


The narration was well done. The characters were well portrayed. Others have criticized Karin Allers work, but I enjoyed it.

HAD TO STOP LISTENING

I'm sure the book would have been good but the narrarator was so horrible that I couldn't get past the first three chapters. I nearly always finish a book, even if it's not terrific, but it was like nails on a chalk board. WAY overacted and very fake. Super annoying.

Awful to listen to

What disappointed you about Twisted Webs?

Story was ok but the performer was so boring, lost my attention over and over.

Would you be willing to try another one of Karin Allers’s performances?