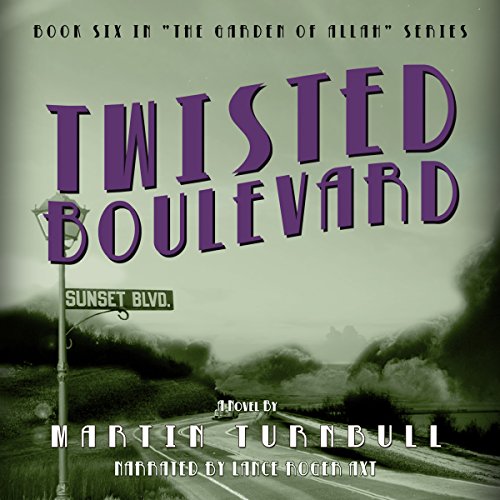 By: Martin Turnbull
Narrated by: Lance Roger Axt
Try for £0.00

When the Red Scare ends, paranoia lingers. Can Tinseltown recover to take on television? After an exile from MGM, ousted screenwriter Marcus Adler is looking for his way back into the biz. When he hatches a plan to start over with a disgraced movie star, a Hollywood censor reminds Marcus that the misdeeds of the past aren't soon forgotten. Hollywood Reporter columnist Kathryn Massey is always looking for a hot tip. She never expected it would come from Lauren Bacall, and point her toward a new career high. But when a trip to the set of Sunset Boulevard reveals a haunting glimpse into her past, Kathryn isn't sure who to trust, especially when a hot new rival hits town. Gwendolyn Brick thought her new store would be a hit, but she never realized it could become a target. Threatened by Los Angeles' most notorious madam, Gwendolyn will need a Hollywood-style miracle to keep her store alive. Twisted Boulevard is the sixth installment in the Hollywood's Garden of Allah saga. If you like richly woven details, the Golden Age of Hollywood, and characters who come to life, then you'll love Martin Turnbull's captivating historical fiction series.

What listeners say about Twisted Boulevard

What did you love best about Twisted Boulevard?

I've read and listened to each book in the Garden of Allah series thus far produced. You become a part of the group of friends as they establish their niches in the dog eat dog world. The celebrities, their almost "walk on" roles add entertainment. The appearances are the "chocolate chips in the cookie" that have become a trademark of the series. Fun!

What was one of the most memorable moments of Twisted Boulevard?

The accident near the beginning and a decision of one of the main characters near the end of this installment. The changing landscape of Hollywood that has everyone adapting for continued survival. Sorry, I won't say more so as to protect from any spoilers!

It was that but also one to take my time and savor the story.

I enjoy works of Historical fiction. The era portrayed in this and the other books in the series.Hollywood...

This was an interesting work! Well researched and well written. This held my attention.As always.

BE AWARE: VERY SELDOM appearance of bad language. Infrequent. For me, those issues didn't take away from the action of the story considering.

This review copy audiobook was provided by the author, narrator or publisher at no cost. Which I can only assume was voluntary on their part. I am happy to give my honest review of it. I think I'm suppose to mention how reviewing this was voluntary on my part too.

Would you listen to Twisted Boulevard again? Why?

I rarely listen to a book twice, because I already know the ending!

What was one of the most memorable moments of Twisted Boulevard?

What about Lance Roger Axt’s performance did you like?

The way he portrayed each character, going from one to another without you realizing it.

Disappointed that this series was ending.

If you could sum up Twisted Boulevard in three words, what would they be?

What other book might you compare Twisted Boulevard to and why?

Biographies of Hollywood movie stars of the 40s and 50s because it's a tell all of who's who.

Who was the most memorable character of Twisted Boulevard and why?

Marcus was sensitive, brave, realistic and so unjustly wronged.

"I was voluntarily provided this review copy audiobook at no charge by the author, publisher and/or narrator."

I received this audiobook free in exchange for an honest, unbiased review. I really enjoyed the hiistorical aspect of it, especially since I used to live 2 blocks from Sunset boulevard! I also really loved that the main character's were not heterosexual males, since we seriously have enough stories about them, especially when it has to do with Hollywood! I wished the narrator had more variation between the characters though as it became difficult to tell who was speaking, and although his voice was fun and old timey, it was so sing-song and announcer like that it often became background noise and I forgot to pay attention to the story.