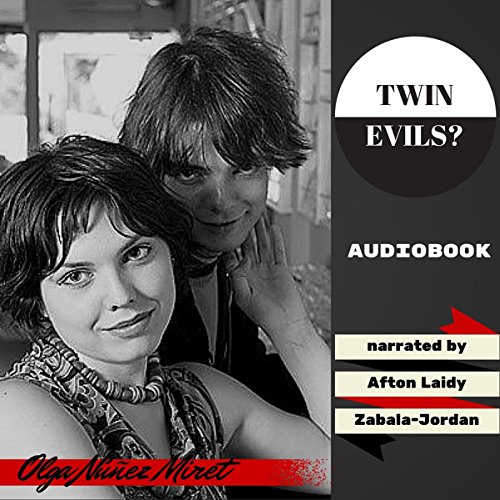 Once upon a time there was a pair of twins, a girl and boy. Ruth was blonde, blue eyes, very fair and really good. Max was dark haired, grey eyes, broody and bad. Their next door neighbor and pal, Hilda, tried to be friends with both but it was not an easy task. They didn't like each other, and she found herself in the middle trying to keep the peace. Max found his sister impossibly perfect and tiresome, and Ruth could not stand her brother's bad boy attitude and his horrible behavior. She was scared of him. Ruth was too perfect and child-like for the real world and Hilda suspected something was wrong but didn't know what. Was she the angel everybody took her for? Was she ill? When both twins started talking about fate and said that 'something' would happen she worried. What could she do? And indeed they were right. Something did happen.

Max was scary! I loved it!

Would you listen to Twin Evils? again? Why?

I mean i would when the story got fuzzy to my mind. I'm not the type of person to listen or watch movies more then once unless it's like Harry Potter lol. I have a pretty good memory when it comes to scenes and dialogue I read or listen to so once I have heard something it's pretty stuck up there for a while.

My favourite was Max although he was bloody mad! He was a real piece of work and dramatic too, including his tattoos! It was epic!

My favourite scene was between the one where they play that board game or where Max runs away as a ploy to mentally fuck with his family or when Max shows his tattoo at the b-day party. I had a lot of favs as you can see.

Yes. At first I was like let me listen to this while I drive to the mall but ended p leaving my head phones in and finished it as I shopped.

I REALLY liked this book!