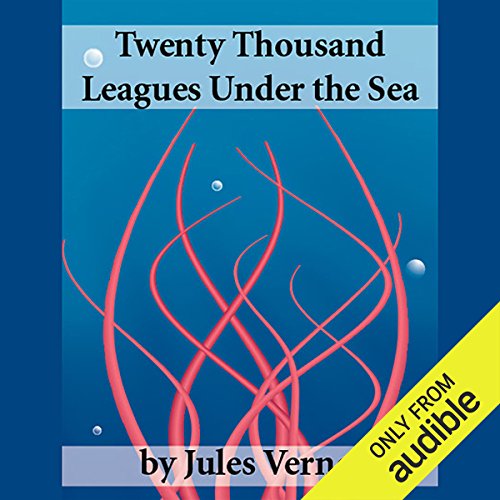 Twenty Thousand Leagues Under the Sea

By: Jules Verne
Narrated by: Jim Killavey
Try for £0.00

Jules Gabriel Verne was a French author who pioneered the science-fiction genre and is best known for his books Journey to the Center of the Earth and Around the World in Eighty Days. Twenty Thousand Leagues Under the Sea is a classic in which Verne prophesized many modern uses of the submarine.

The story concerns the now famous fictional character Captain Nemo and his submarine, Nautilus, as seen by one of his passengers, Professor Pierre Aronnax. Over the years there have been many film, TV, and theatrical adaptations and variations of the book.

What listeners say about Twenty Thousand Leagues Under the Sea

This book is my first audio book, and I found it great, the story was really interesting and I never wanted to stop listening. The narrator was good and I really enjoyed listing to his voice.

There is a very annoying echo on this recording. If things like that aggravate you I would say don't buy this

Twenty Thousand Leagues Under the Sea is classic Jules Verne, and it deserves a narration that captures the delicious joy of scientific discovery and adventure so embedded in the novel. Mr. Killavey, sadly, does not offer such narration. His performance is little more than a reading of the words, passed through quickly and without understanding. All joy is lost.

Not hyperbole - I thought this was being read by text recognition software. Couldn’t get past the first chapter.

Sound quality and narration made this a bore

I quit listening after 30 minutes and bought another version of the same story with better audio and performance reading. I don’t recommend.

First of all, I know this is a classic. But it was way too wordy and detailed for my taste.

The recording quality was garbage! There were sometimes other voices in the background, the speaker’s voice changed in quality as different recording sessions were spliced together, and there was a low him over the whole thing. Yuck!

The writing is written exclusively in passive tense with an unusual amount of unnecessary detail as if we were going to fact check everything being said.

It describes everything too much. Throughout the book there were parts that were very boring but the end was very interesting.

classic story but the narrator sounds like a robot

This guy sounds like an automated phone robot. He is horrible. I honestly can't give him a good review. The story is timeless.

This is a great classic book of adventure under the sea. Jules Verne had a great imagination and a wonderful foresight of the future. However this was ruined here by this awful narration along with poor audible quality. Also this not, I say not, an unabridged version of the book