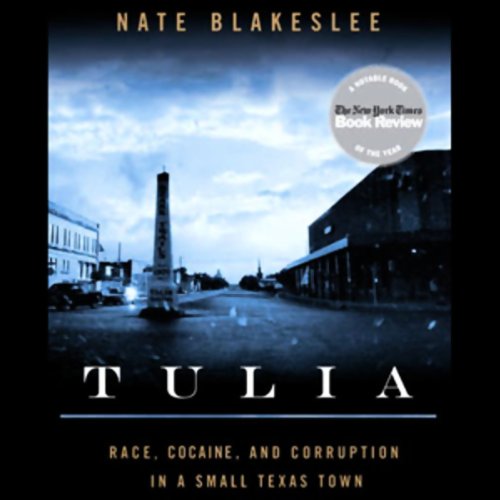 By: Nate Blakeslee
Narrated by: James Boles
Try for £0.00

Early one morning in the summer of 1999, authorities in the tiny west Texas town of Tulia began a roundup of suspected drug dealers. By the time the sweep was done, over 40 people had been arrested and one of every five black adults in town was behind bars, all accused of dealing cocaine to the same undercover officer, Tom Coleman. Coleman, the son of a well-known Texas Ranger, was named Officer of the Year in Texas. Not until after the trials, in which Coleman's uncorroborated testimony secured sentences as long as 361 years, did it become apparent that Tom Coleman was not the man he claimed to be.

Tulia is the story of the town, the bust, the trials, and the heroic legal battle to reverse the convictions that caught the attention of the nation in the spring of 2003. With a sure sense of history and of place, a great feel for the characters involved, and showdowns inside the courtroom and out.

Blakeslee's Tulia is contemporary journalism at its finest, and a thrilling read. The scandal changed the way narcotics enforcement is done in Texas, and has put the national drug war on trial at a time when incarceration rates in this country have never been higher. But the story is much bigger than the tale of just one bust. As Tulia makes clear, these events are the latest chapter in a story with themes as old as the country itself. It is a marvelously well-told tale about injustice, race, poverty, hysteria, desperation, and doing the right thing in America.

" Tulia, in Blakeslee's rich and deeply satisfying telling, resembles nothing so much as a modern-day To Kill a Mockingbird, or would, that is, if the novel were a true story and Atticus had won." ( The New York Times)
"Blakeslee's excellent and eminently readable book is a wonderful story of justice triumphant, but his vivid portrait of law enforcement gone wrong suggests that there are more Tulias than there are lawyers dedicated enough to expose them." ( Washington Post)
"This devastating indictment of the toll taken by the war on drugs, viewed through the prism of one small community, is a masterpiece of true crime writing...this haunting work will leave many wondering how many other Tulias there are out there." ( Publishers Weekly)

What listeners say about Tulia

To call this story 'entertaining' isn't really the right word, since this true story is about a struggle of the underdogs against an oppressive criminal justice system gone terribly wrong. Perhaps 'shocking, disgusting, tragic, enraging, travesty, hatred, victimization, and redemption' are more suitable terms when it comes to describing the events in Tulia. It is terrifying to learn that such things can still occur in America. It causes one to wonder just how many more Tulia's are out there that have simply been allowed to happen.

A very compelling read/listen. It will definitely cause your blood pressure to spike. Highly recommended and I would say it can be called a MUST read.

This book shows the best and the worst of the legal system. As a lawyer myself, I was sickened to hear of the gross miscarrage of justice for these defendants convicted on only the word of a shady undercover narc. This book shows how wrong things can go whenwhen police and prosecuters don't want to play by the rules. On the other hand, the lawyers that took on this case during the post conviction stage are the very best in our profession, countless hours, untold expenses and no pay. These lawyers exemplify the spirit of pro bono work and make me proud to count myself a member of the profession. It is a hard story to listen to if you have any sence of humanity and justice.

A jury of your peers

This is justice in America, not that many years ago. The author has blended trial material, the legal teams and affected individuals into an engrossing book. A great read/listen.

To date it is by far the best of all of the audio books I have listened to. It was extremely well written and best yet, well read. The fact that it is based on true events makes the story captivating to say the least. I recommend this book to anyone who is interested in a good story - the kind that makes you pull your car over just to get all the details.

Can't tell the players without a program

I found the story interesting, particularly since it happened less than 15 years ago - a story of racism and police corruption in Texas wouldn't have surprised me 30 or 40 years ago, but not this recently. However, like many stories of conspiracy, corruption, and courtroom dramatics, there are a lot of people involved, and listening to it gets a bit confusing. Actually, there is limited reading specifically of the courtroom transcripts, but there is a lot of back-and-forth among the lawyers on both sides of the aisle - which is fine and still interesting, but keeping all the names straight was a challenge. Ditto for all of the victims in the story (the original drug bust included 46 people), especially when you include input from their family and friends.

It's still an astounding story and still worth listening to (or reading), but be prepared for a lot of players to be involved.

Awesome in every way

Where does Tulia rank among all the audiobooks you’ve listened to so far?

Right up there with the very best true crime books I have ever read.

I do not know if this book can officially be classified as a true crime story. It leans very (VERY) heavily on actual courtroom drama, which happens to be a special fascination of mine. If you hate courtroom proceedings, then this book is not for you, unless the general revelations about a particular justice system in Texas, which I believe could well have been a lot of other places, is of interest to you. Or even if that isn't of special interest when you start the book, I believe it will be by the time you finish it. And finish it you will.

This is all about one out-of-control "gypsy" law enforcement guy, I wouldn't call him an officer, although I suppose he officially was one, in title only. He figured out a way to actually enrich himself by setting up bogus drug busts, knowing his own word was all that was required to make the scheme work, while meanwhile he was pocketing a lot of the cash received from the sales he set up. For the sales, he used greatly watered down cocaine originally purchased by him with agency money, then thinned way down. He turned in some of the buy, then sold the altered remainder. This went on for some years. Very lucrative.

So he succeeded in implicating a large group of mainly young black men, but some of them actually had nothing to do with the scheme and the rest, of course, were trapped by illegal means. But most of them ended up in prison with very long sentences. They had ineffective, or no, legal representation. The charges just slid right through the system, in spite of some evidence which was passed over or never presented.

It was quite distressing to be taken step by step through the scenario where such a thing could occur and then continue for what would have been forever, had not a new element been added to the mix. And this new element is not something which the majority of such victims sitting in prisons today have access to.

The narration of this entire book was totally EXCELLENT. It might be the best narration I have heard thus far. The reader very realistically mimicked many characters in the story. He was so good I was not even sure they were all his creations. VERY well done!

I understand there was at least one documentary done on this story. I believe it was done somewhere in the middle, before any resolution had occurred. This documentary served to arouse interest in the case and was no doubt the impetus for the eventual resolution.

I would urge just about any nonfiction lover to treat yourself to this quality book. You can't go wrong.

Could have been much shorter...

The premise of this book was great. A good story was certainly told, which drew empathy from me. The book was so long with a lot of repetition and useless information (especially toward the middle of the book). A lot of 'courtroom lingo' is used throughout the end of the book, which was interesting. The audio track skipped a lot toward the end, which made it frustrating to listen to. Not the best true crime book, but I don't regret listening to it either.

I found this to be one of the most entertaining books I have ever heard, despite the serious and very upsetting content. It's a book that would be a perfect novel, all the elements of human heroism and triumph over adversity are there. The villains are well-crafted. The resolution is nail-bitingly tense. The legal arguments are fascinating. But, it's a true story, a very recent one, and it's one everyone should be aware of. The author, and the narrator, have done a superb job of crafting this work so that educating ourselves on this modern travesty of justice is an absolute pleasure. I'm sure the story will reach that many more ears as a result.

The story was extremely informative! The narrative was well done. Unfortunately the recording had many interruptions due to mechanical problems which spoiled the reading. What a shame

I heard about this book on the podcast NOT GUILTY, I it was definitely worth the read. unfortunately many people have spent years behind bars for crimes they did not commit and didnt have anyone to come to their aid. thankfully some stories have happy endings, but not all.