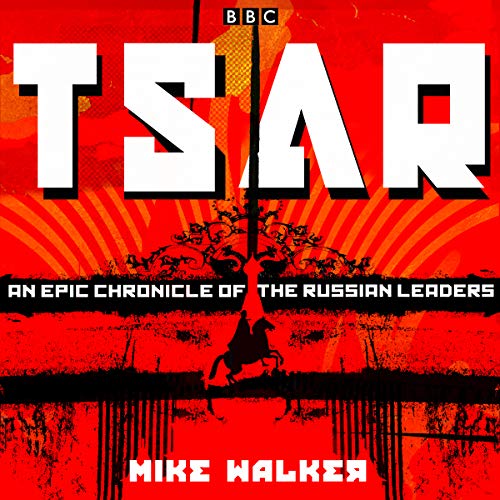 Broadcast to mark the centenary of the Russian Revolution, this extraordinary drama cycle by Mike Walker comprises 11 ambitious plays spanning over 400 years, exploring the lives of Russia’s key rulers from Ivan the Terrible to Vladimir Putin.

Ivan the Terrible: Absolute Power - the rise and fearsome reign of the first Tsar of All Russia. Starring David Threlfall as Ivan IV.

Boris Godunov: Ghosts - did Boris Godunov have Ivan the Terrible's son killed? And what happened when the murdered boy came back from the dead - leading an army? Starring Shaun Dooley as Boris Godunov.

Peter the Great: The Gamblers - Moscow, 1682 and two joint tsars rule: one, Ivan, is feeble-minded and the other is Peter, a child of 10 years old. Starring Will Howard as Peter.

Peter the Great: Queen of Spades - distracted by his new capital, St Petersburg, and wife Catherine, Peter ignores his opponents: until his own son Alexei declares his colours. Starring Elliot Cowan as Peter.

Catherine the Great: Husbands, Lovers and Sons - did Catherine foresee the consequences of staging a coup d'état against her husband the Tsar? Or did she want him dead from the start? Starring Samantha Spiro as Catherine II.

Alexander I: Into the Woods - the story of the reluctant Tsar who took on the greatest threat Russia had ever faced - Napoleon Bonaparte - and won. Starring Joel MacCormack as Alexander I.

Alexander II: The People’s Will - revolutionary terrorist cell The People’s Will is determined to assassinate the Tsar. But in the struggle between autocracy and socialism, there can be only one winner. Starring Joseph Millson as Alexander.

Joseph Stalin: The Last Bolshevik - in 1941, the Soviet Union was invaded by the Nazis - and Joseph Stalin retired to his dacha, seemingly defeated.... Starring Brian McCardie as Stalin.

The Shield and the Sword - thirteen interconnected stories about the enigmatic Russian President, Vladimir Putin. Starring Nicholas Murchie as VV.

Written by Mike Walker.
Produced and directed by Sasha Yevtushenko and Alison Hindell.

What listeners say about Tsar

Put off by accents

I enjoyed these dramatisations overall, but was slightly put off by the regional British accents. Whilst I didn’t expect (or even want) real or put on Russian accents, a little less extreme (Stalin was Scottish) would have been easier to ignore.

Liked it till the modern stuff

Really enjoyed this until the Lenin onwards sections. I found it hard to follow who was who and what was going on. The bit before 20th century was engrossing and a fantastic overview of the people that governed Russia. More twists and backstabbing than the Stuart's and Plantagenets combined. Highly recommend it you love history combined with docudramas.

Another great listen from Mike Walker

While not quite as sparkling as Plantagenet or The Stuarts, I still enjoyed listening my way through these. I agree with the other reviewer that the accents were jarring at first - if you don't get used to them as I did, then I should think the whole set would drive you mad. Once I adjusted, I found it an interesting way of conveying that Russia isn't some kind of unified block, and that figures such as Stalin, a Georgian, would have been as distinctive in his speech as someone with a Scottish accent would be in London.

Overall, while I enjoyed the characters, I found it a little hard to tell them apart, and to get a grip on the historical context. I think I was trying to think about it too much, instead of just enjoying the drama! They're plays I want to revisit to understand better, and I thought the Putin episode in particular was really superbly done.

An impressive cast of characters and actors for all the episodes, even if none of the cast are actors I'm familiar with The BBC did a fantastic job with these. Russian history has appealed to me for some reason, and I'm not Russian at all. I'd recommend this to any fans of history, Russian or otherwise.

BBC at the top of its radio game with this; Mr Walker has written a nuanced, fascinating historical drama of the Russian Caesars (from Ivan The Terrible up to Vladimir Putin) and one that, I am glad to say, shows a degree of respect for Russian culture & history that is sadly missing from most western narratives Highly recommended.