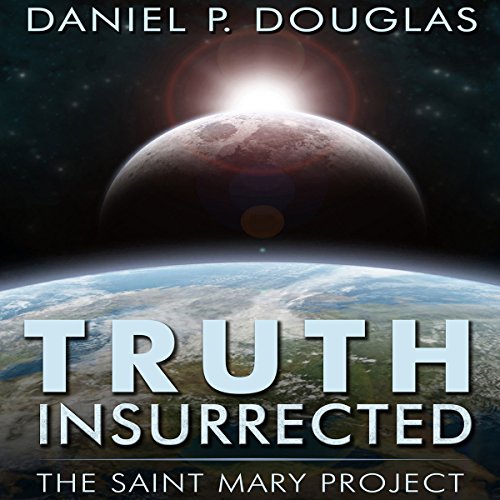 Will truth be mighty and prevail? Find out in the science fiction conspiracy thriller, Truth Insurrected: The Saint Mary Project

When former FBI agent William Harrison begins receiving mysterious postcards with the signature "Echo Tango", he's alerted to a cover-up beyond anything he ever thought possible.

His informant turns out to be a guilt-ridden ex-operative in the Saint Mary Project, an ultra-secret program engaged in alien contact. The organization is wiping out loose ends, and Echo Tango thinks Harrison is the man he needs to stop it.

Thanks to a gunshot wound suffered in an attempt to thwart an armed robbery, the crime-fighting life is something of Harrison's past. He keeps his shooting skills sharp but walks with a limp, and he is more likely to catch marital cheaters than anything else - as a private investigator.

But Harrison can't shake the feeling that this case is meant for him. He enlists the help of colleagues and starts following the clues.

However, hired guns stand between them and the truth. There are also alien-human hybrids to contend with, but that's not all. Harrison's investigation also turns up a powerful secret about him and his family - a secret that may just be what lets him end these unimaginable crimes.

What listeners say about Truth Insurrected

Daniel P Douglas's Truth Insurrected" The Saint Mary Project is less a science fiction tale and more a detective / mystery involving an ongoing government black operation concerning aliens and their technology. Unfortunately, rather than focus on the alien aspects, the story is mostly about an ever expanding government coverup trying to keep everything secret, while an internal leaker is feeding clues to a private investigator in an attempt to expose the sordid tale.

The sci-fi elements are minimal with a weaving in of the Roswell UFO sightings as the start of periodic visitations. Supposedly, while the government was denying the stories, they were busily exploiting the alien technology in anticipation of a future invasion, but there's little to show for that effort. There are also human alien hybrids with resulting psychic powers. Sadly, little on this side is revealed in sufficient detail to create a plausible origin grounding. Instead, the ever increasing need for secrecy leads to murdering anyone including Kennedy, who gets any inkling of activities. Overall, while a respectable detective tale, the feel of the story is more along the lines of made for TV movie with little depth in plot or characters, "bad" guys who seem to know everything, and supporting "good" guys who have no idea what is going on.

The narration is quite well done with an excellent range of voices and solid pacing.

The ending is notable being arbitrary, incomplete and almost trite. The book fairly rocks along ( and it is a rather long book, so get ready ) but boy, the ending is weak.

If you’ve listened to books by Daniel P. Douglas before, how does this one compare?

No, so no comparisons available.

What does Jim Morris bring to the story that you wouldn’t experience if you just read the book?

The characters are breathing creations. Morris does excellent work here, and is the highlight of this offering.

Was Truth Insurrected worth the listening time?

Aside from the ending, yes.

This is a sprawling audiobook, with a wide variety of characters, plotlines and concepts. It all stumbles to what I felt was a rushed ending, but on balance, this offering is still worth the investment.

Would you consider the audio edition of Truth Insurrected to be better than the print version?

Good question. I haven't read the print version but as I was listening I wondered if it might be better. I'm not sure if it was the narrator's style or the way the book was written but it is somewhat stilted, hurky/jurky and hard to follow at times, especially in the first third. It gets better as it goes along, though.

Harrison and his FBI buddy. I liked them because they had a great bond and a lot of humor between them. I also like that they are both somewhat irreverent and not politically correct all the time (Harrison smokes and it makes him more human).

Would you listen to another book narrated by Jim Morris?

I'm not sure. He has a really nice voice, but seems to go from one sentence to the next and one conversation or episode without pause, which left me a bit in confusion sometimes about who was speaking or how we got to where we were in the story. He may have been doing the best he could with material that was somewhat meandering in its presentation.

No, it is too long. But I enjoyed coming back to it.

I don't know if this is the author's first book or not. The story was very intriguing and if you find stories about UFOs, Aliens and Secret Government Agencies enjoyable it is a fun and adventurous listen . The characterization was very good and the characters interesting and likable. However, I found that the author jumped around in kind of a jerky sort of way and at times the story lost me a few times and I had to go back and listen to the section again and still couldn't quite figure out how we went from Point A to Point B. Sometimes he piles too much detail into a conversation or action and other times he jumps somewhere else and you can't find any reason for it. I think how he represented the situation where people were having their minds controlled were particularly unclear. I couldn't really tell when they stopped thinking their own thoughts and began echoing the thoughts fed to them.The ending, after such a long and detailed story seemed very rushed and since there was no epilogue or complete closure on the situation I'm wondering if this is because there will be a sequel? Very enjoyable and fun story over-all and one I will probably listen to again just to clarify some of the details. I did like that the aliens weren't necessarily the bad guys. If this is Mr. Douglas' first book it shows great potential for future books to be enjoyable.