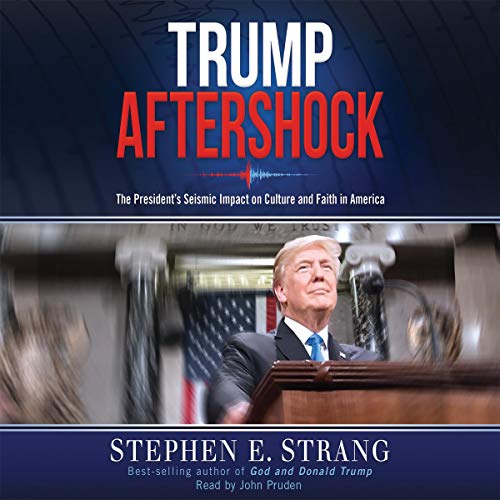 The President's Seismic Impact on Culture and Faith in America
By: Stephen E. Strang
Narrated by: John Pruden
Length: 10 hrs and 45 mins
Categories: Non-fiction, Politics
5 out of 5 stars 5.0 (1 rating)

The election of Donald J. Trump sent shockwaves around the world. Shock troops were deployed along with the predictable rent-a-mob who stormed the streets of our nation’s cities. Within hours a movement was born.

The Trump agenda, promoted daily to millions of voters and adoring fans, was to “Make America Great Again”. It was an agenda focused on strengthening the economy, restoring the federal courts, addressing the overwhelming surge of illegal immigration, rebuilding the military, and uplifting America’s standing in the world. For the opposition, the objective was to impeach Donald Trump.

Stephen E. Strang will explore the nature of this dramatic confrontation, covering various topics, including:

In Trump Aftershock, Strang explores and analyzes Trump’s effect on American culture from a Christian perspective, drawing upon interviews with many of the key players and offering insightful commentary on what the long-term prospects of the ongoing war of worldviews may portend.

The story was the greatest I have ever heard! I knew Trump is the man for the job and I supported him, and if he runs in 2020 he will get my vote!
Trump is the best President the United States has had in a long time. Trump is an interesting man!