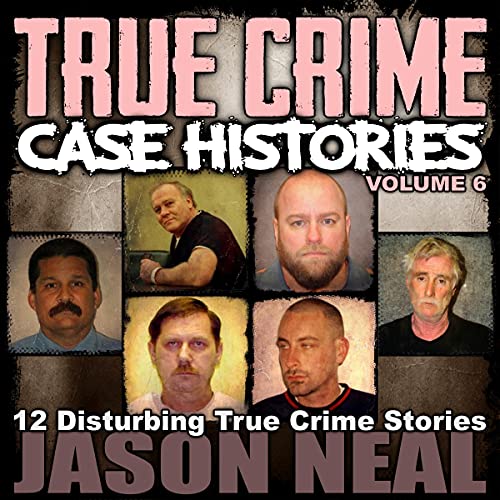 By: Jason Neal
Narrated by: Steven Rostance
Try for £0.00

As with the previous volumes of True Crime Case Histories, I use this introduction space as a quick word of warning. The stories in this audiobook represent humanity at its absolute worst. Pure evil. Television crime shows and news articles often skip the messy parts of true-crime stories. The details are just too much for the average person.

In my audiobooks, however, I don’t leave out the details. I go through hours of research for each story. I search through old newspaper articles, court documents, firsthand descriptions, and autopsy reports. In my audiobooks, I include details not to shock, but to give the listener a deeper look into the twisted mind of the killer. In the end, it’s unlikely any of us will understand the motives of the criminals in these audiobooks, but the level of depravity will at least keep you resisting the pause button.

That being said, if you are overly squeamish with the details of true crime, this audiobook may not be for you. If you’re okay with it...then let’s proceed.

A sampling of the stories include:

In this audiobook, there’s the story of a young English man who had planned to become UK’s most notorious serial killer, but couldn’t keep his mouth shut after his first kill and bragged to over 20 of his friends.

Another story covers a group of four young men who believed they could do anything they wanted because their lord Satan protected them. Satan apparently couldn’t protect them from prison.

There’s the story of a San Diego man who made it his life’s mission to help young men avoid a life of crime. His good deeds resulted in his entire family being butchered by a boy he was trying to help.