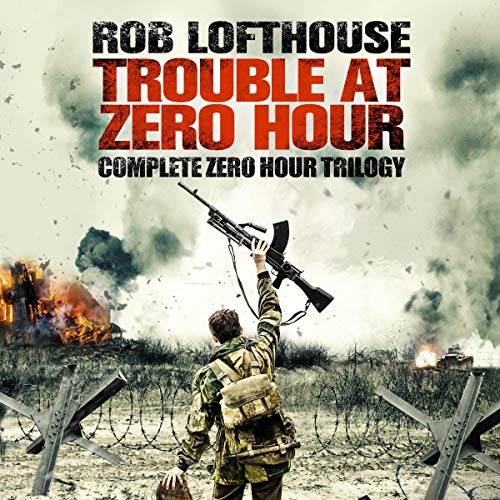 By: Rob Lofthouse
Narrated by: Peter Kenny
Try for £0.00

Written by a retired British soldier, Trouble at Zero Hour is a breathless and vivid story, dramatising three of the key Allied operations that turned the tide of the Second World War.

6 June, 1944, somewhere over the Normandy coastline: Robbie Stokes sits in a glider, his Bren resting on the floor between his outstretched legs. The nose lowers and the glider descends rapidly: 10 minutes of stomach-churning twists and turns until suddenly the call goes up to 'brace'. The belly makes contact with the ground and the first Allied troops tumble out into occupied Europe.

For new recruit Robbie Stokes it is the beginning of 10 months of brutal and relentless conflict that take him from D-Day, via Operation Market Garden and the battle for Arnhem Bridge, to the Rhine Crossing and the final push for victory. Three operations that change the course of the war and test Robbie Stokes and his band of brothers to their limits. If they fail, then the Allied invasion fails. They must succeed through their longest days.

What listeners say about Trouble at Zero Hour

Well written and narrated.
A very enjoyable book.
Could not put down from start to finish.

A fantastic listen.
Having seen various films depicted in the story,i found it hard to stop listening.
Best war story yet.

First class storytelling and a must read/listen

My first ever audiobook experience and what a belter it was!

Join Robbie Stokes as he rises through the ranks during his tours from Normandy to Arnhem and Germany, enjoying moments of comradery and success but also picking up scars along the way - both physical and emotional.

Listening to this book during a global pandemic, it's easy to feel like we're having a tough time of things right now. But this story brings home the reality of real hardship a sacrifice, with superbly researched details and information that complement the incredible storytelling that Rob Lofthouse has achieved.

The narration is also fantastic, with incredible acting, only made possible by the equally fantastic dialogue.

Overall, I would describe this as a must read not only for fans of the military genre, but for anyone who loves stories with small, personal details, that leave you thinking about the characters long after you've finished the book.

Rip off of Band of Brothers

great reading by the narrator, really brought the book to life, mix of hitorical and fiction, brought the listener to the battle field.

Loved it from the off. Very well researched fiction. Can't wait for the next book.