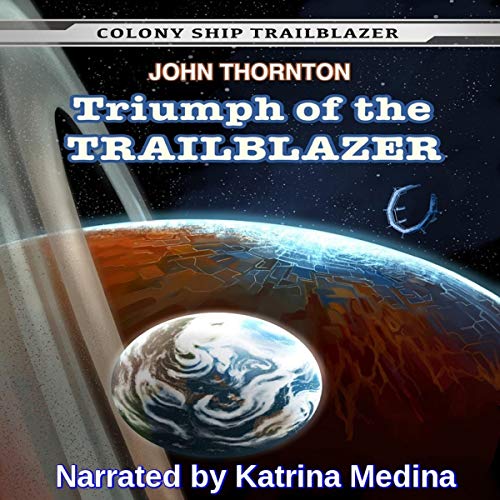 Triumph of the Trailblazer

Triumph of the Trailblazer

This is the eighth and final book in the Colony Ship Trailblazer series.

Sad to see the end of the series

So sad to arrive at the end of this series.
A great story and superbly narrated by Katrina Medina.
Sort of classic sci-fi.
I do hope there is more in this universe to come.
I received a free copy of this audio book at my own request and voluntarily leave this honest review. .

Triumph of the trailblazer.

I would recommend you read the books in order, otherwise you would get confused. A lot of things happen in the series and the characters also change.
If you like science fiction with plenty of suspense then this is for you.

This is the sixth book I’ve read/listened to by this author and third in this series (I’ve listened to the first two already). I am really intrigued by the stories in this world and wish to listen to most of them, but i find this series has some negative aspects to it that I do not find in the others i have listen to. I am not sure I could handle listening to the remainder of this series with all the literal negativity.
Boy, do I dislike Janae! This character is irritating, over emotional, constantly pines for Constance (often at inappropriate times), and speaks often with superfluous, sarcastic, sanctimonious alliterations. Are used to think the authors ability to make me dislike one particular character so much and yet enjoy all the others was quite an achievement. However, I found it I came to dislike the attitudes of many characters in this book.
Many of the characters ask the AI units for information and advice then tell them to shut up, top stop talking and be concise and precise. I found the negative attitude disturbing. The lack of respect often carried over to interactions with people.
Often a character would chatter on or simply discuss a topic in depth and then the other character would become impatient and tell them to stop talking or be concise and precise. Sometimes the characters would be giving information that expands on the story for the reader/listener, but often I felt those parts could have been eliminated and avoid the negative intercourse.
Repetition of certain phrases was tiresome. For example: ‘be precise, concise and on topic’ or ‘I do not mean to be snarky, snotty or sarcastic...’. These were phrases spoken by both the humans and AIs.
This series has such a different feel to it than the others I have listen to, that it seems it has been written by a different person.
Having not listen to books 3 through 7, I am missing a huge chunk of the story, yet this book still made sense and tied up the story.

This is the first book I’ve listened to by this narrator ( Katrina Medina ).
There are some editing issues with repeated sentences. She also often mispronounces words.
The narration volume is too low and the voices are muffled with the effect she uses when the characters are having a phone conversation. I got tired of rewinding, then increasing the volume and trying to re-listen. Often I would then get my ears blasted with the normal volume before I could pause and readjust. I ended up just ignoring it and therefore missing out on parts of the story.
Not all her character voices are distinct. Some have very subtle differences which made it difficult to decipher which character was speaking. For those characters she does give a voice, it is done well. She also does the AI voices appropriately. She brings out the emotion and personalities of the characters. Her ability to do snarky probably only exacerbated my dislike of Janae, which is a plus for a narrator.