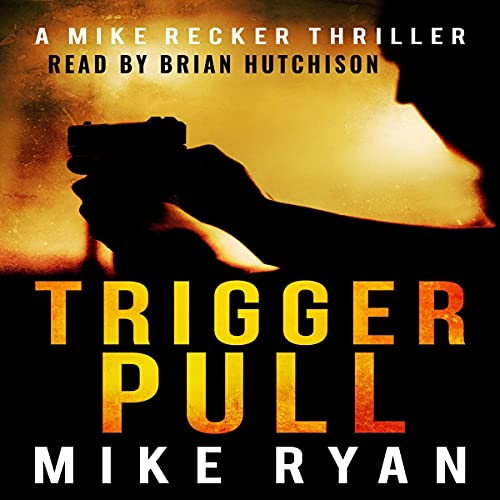 By: Mike Ryan
Narrated by: Brian Hutchison
Try for £0.00

After getting back from London, Recker and the team are immediately swept up in Vincent and Nowak's feud again. Though they initially refuse in getting involved, their minds are changed when they start getting ambushed. Recker is ambushed in an alley while trying to prevent a jewelry store heist, Haley has his car blown up in trying to track down the suspects, and Tyrell's relationship with Recker is found out, leaving him in a vulnerable position. The team learns it's all part of Nowak's plan to rid the city of all of them, leading them into an eventual final confrontation with her. One that will be deadly.

What listeners say about Trigger Pull

Short but yet satisfying none the less!

This Silencer Series will somehow such you in! The box sets are great value but somehow I can't wait for the last two editions bring released individually.
The collaboration between Team Silencer and Vince's crew as far fetched as it may seem works just fine for me, although they always still seem to have the deck stacked against them plenty of times to keep your attention. Narrirator is top notch and dominates the entire collection from the beginning until now.

I love the story line and the narrator. I have listened to the first 10 books in a month. They are addictive!

I absolutely loved this series! great job by Mike Ryan. great job to the stunning performance by Brian Hutchison. will recommend this series to anyone and everyone.

Loved this series! I hope there are more to come!! Looking forward to more Silencer adventures!! Kudos to well crafted books!

I love this hotels Siri